REBCCA is the moderator for this forum.
Author:
Sorting Last Post on Top ↓ Message:

Send Private Message
Reply
How does this thing work? Can you tell that I just messaged you b/c as I look at it, it doesn't seem to be a thread to your comment.
Also, meant to mention that Water Aerobics sounds awesome! I so wish we had something like that in our area. I have plantar fascia, so it's really difficult to do much exercising!!! Frustrating b/c I've always been such an active person. Do you do deep water? My friend used to do water aerobics all of the time, and she loved deep water but then moved somewhere where they didn't have deep water, and she grew to like the other... says she got just as good of a work out (I guess using weights?).
Well, good luck with that! Have fun!!! :)

Send Private Message
Reply
That is an awesome weight loss since Christmas! I was going to start this diet back in January, but then I got the flu and started eating "comfort food," and then the "comfort food" continued for stress - ha ha! I am determined now to get on it and stay on it. I need to lose 40 pounds!

Send Private Message
Reply
Well, you don't look ugly to me! Having the thyroid problem has to be just terrible. I sympathize so much - I cannot imagine. I hope you are feeling better. Stenosis sounds awful, as well. I had a friend who had that... she worked out all of the time - I don't know how she did it. I have a bad back, and it prevents me from working out. ???? Not sure how she did it?

Send Private Message
Reply
Are you still on SP? I just came back after a long absence, as well.

Send Private Message
Reply
I am totally like that - a "small" sweet now and then just doesn't seem to work for me! Also, I agree... getting home from work - you are TIRED... it's difficult not to want to sit down and watch t.v.... and yes, eat.

Send Private Message
Reply
My brother and I ask each other that all of the time! We wonder WHY, when we feel so great "on the plan" (as we call it), do we EVER go back to eating bad? I hope you're doing well!

My SparkPage
Send Private Message
Reply
I feel this. Last year was a rough year for me. I put on 40lbs and I am the biggest I have ever been. I have done well and lost 12lbs since Christmas day. I am down 2 sizes in clothes. I am struggling with eating healthier more on the weekends. We are so busy and there are times I just want french fries or bread. I have not been able to stay within any of my ranges over the weekends. I start off great, but by the end of the day, it is done. I have loved going to the gym. I have found a great water aerobics class and have been doing a few other things at the gym.

I think it is a struggle every day for anyone. It is hard, especially if you work full-time and have a family.

I too have thyroid disease, specifically Hashimoto's disease. It is very hard for me to stay motivated and to keep making the right choice all day long. It is so much easier to eat what I want and what I enjoy, even though, I am still doing that, just not as much. I am trying to exercise more everyday. I also have spinal stenosis, but, I'm tired of being fat, feeling fat, and feeling ugly. So, the only way to change those things is to change me. I had my metabolism checked I was told I have the slowest metabolism they have ever seen. :( I know. Hang in there, we've got this! Nancy

Send Private Message
Reply
THIS...is me word for word. I struggle daily and am always trying to figure out where to find the motivation to actually get out of my rut. 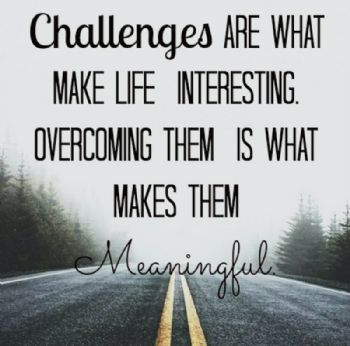 "'Enough' is a feast. Buddhist proverb

My SparkPage
Send Private Message
Reply
It is difficult for me because I am dealing with hypothyroidism and you tend to take twice as long to lose as regular people.

My SparkPage
Reply
Well - put too much back on so: starting again


Old enough to know better. Young enough to do it again. Crazy enough to try

Send Private Message
Reply
I am struggling so much, it sounds like I'm not alone....I was doing good a year ago, I had lost 20 lbs, though it took me 5 months....and we had to put our rescue dog down and since then, I have just given up. I know it's not right, the action of the dog is not a reason, the decision to give up is wrong, but I'm at the point of I don't care. I don't want to be there, and oddly enough when I walk to the pantry or the refrigerator, I still "control" somewhat what I choose to eat, but, still I eat more then I should of bad choices. I am retired, we have the resources available to me to eat right, exercise, etc. I do have back problems, so I have some limitations, BUT I am having an MRI soon to evaluate that. I know I can do this if I try completely, I just don't want to bother! I need to bother! Help!

My SparkPage
Send Private Message
Reply
Oh, idk... seems to me it's always hard to make a change. Takes some effort and motivation. Much easier to just keep doing whatever it is we've been doing, even if we know it's harmful or unproductive, and won't help us reach our goals.

You're either going to keep doing what you're doing, and think about it (like you posted here). Or you're going to think about a small change you could make, to break this habit. Either way, you're going to be thinking about it. You get to choose whether the advantages of what you're doing now, outweigh the effort of making a change (and the advantages of doing so). The first few days, maybe a couple weeks, after making a change are the hardest. Getting started is hard. But once you get going, it really does get easier to keep going.

When I was still working, I made a "rule" for myself that I would not sit down and veg out after work, until after I'd cooked a healthy dinner. Often, I'd batch cook on the weekends so a healthy dinner during the week was basically heat & eat (pretty quick to "cook"). While I was fixing dinner, I'd multi-task and throw some clothes in the washer or do some dishes or some other little chore. I just did not sit down when I got home, until dinner was ready. After dinner, I could veg out all I wanted to.


Promise me you'll always remember: You're braver than you believe, and stronger than you seem, and smarter than you think - Christopher Robin to Pooh

My SparkPage
Send Private Message
Reply
I'm having the same struggle!! I know what I need to do but just don't. Coming home at the end of the day, I'm tired and down, so I crash in front of the tv for some mind-numbing quiet time. I don't start munching, but I do start vegging . . . and other than getting up to make dinner or some menial chores, that's where I stay. :( It's so depressing and deflating. . . . I go all day long with positive thinking and a mental plan to do better, but once I walk through that door, tiredness takes over and I'm done. Help! I'm back to Spark after a long absence 'cause, like you, this seems so hard and I'm failing.

My SparkPage
Send Private Message
Reply
I don't think that losing weight and getting healthy is easy, at all!

My thought is that when you get home you probably feel tired and need some time to sit and relax. It'd be great if you could either not eat then, or eat just one snack.

If you could do JUST that and stick with it for 3 weeks I feel you could be VERY proud of yourself.

One more thought I have is that food choices make a big difference. I do best when I eat lots of freggies and beans and some nuts and try to avoid sugary foods and junkfood. Some people can have those foods in moderation but not me. When I eat them my body / brain just keeps nagging and screaming for 'more' and I am more likely to binge.

Just not having any foods that trigger cravings and overeating in the house turns out to be the best strategy for me.

My SparkPage
Send Private Message
Reply
Changing any habit is hard. You're so use to doing what you've done that anything else seems abnormal. But the more you commit to being active and eating healthy, the more it starts to become second nature. The fact that you've realized that you're most vulnerable to getting off track when you arrive home after work is a start. You just have to figure out what to do about it.

I find that just as with advance meal planning, planning fitness or "active" activities in advance is generally more successful than waiting until you get home to figure out what you specifically feel like doing. It can even help to schedule specific days to veg out in front of the TV, for instance, when your favorite TV program is on.

My SparkPage
Send Private Message
Reply
You may find shifting to a new paradigm of seeing your lifestyle makeover as a resolve and commitment to creating a healthier more thriving life will make this change easier. Get excited about every mindful choice you make and set up an incentive system with rewards for staying on track.
Make a vision board, post affirmations to counter negative thoughts with positive ones, track you streaks. Decide this is not hard, that it is a chance to replace choices that do not serve to ones that contribute to a higher quality of life.

"'Enough' is a feast. Buddhist proverb

My SparkPage
Send Private Message
Reply
I just wrote a blog post, something that always opens up my mind to new questions and realizations, and it really brought up this question:
WHY is losing weight and getting healthy so hard?

It's not that we don't know how to do it, but for some reason we get into these habits and we just can't get out of them.
I get home from work and instead of doing something productive, my first instinct is to sit on the couch with whatever junk I'm craving, and watch TV. And all the while, I'm actually thinking about how boring and unpleasant and useless my actions are, not to mention how destructive. But instead of doing something that I know will not only be good for me, like going for a walk or a run, cooking a healthy and delicious meal, I continue to self-destruct.

Why is that? The way I see it, it really should be easy. It should be easy to go out and play, or do any of the thousands of activities that are better and more enjoyable than eating Oreos in front of the TV. It should be an easy choice, knowing that there is not one single downside to getting fit and healthy.

So why is it so hard?? Anyone?


"Time you enjoy wasting was not wasted" - John Lennon