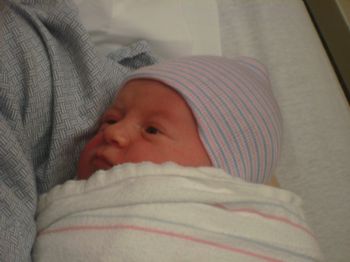 While Kyle was on leave after graduating power school I woke up at 3:30 Friday morning having painful contractions 3 to 6 minutes apart I was a little excited because I had a feeling this was it, they weren't too bad though so I just walked around the house until 7 when I woke Kyle up because they were getting worse and to be honest I needed some help to keep my mind off of the contractions. I had a Dr. appointment that day at 10am so I decided to just tough it out until then because I didn't want to go to L&D again and not come home with my baby. So I took a bath which helped a lot until it was time to go. I only had a few bites of cereal for breakfast because I didn’t want to throw up during labor. When we got to the Naval hospital I told the nurse that weighed me and took my blood pressure that I thought I might be in labor and she just looked at me with wide eyes and said "why did you come here? I'll get the Dr." so the Dr. (Captain Cagnina) checked me and said that I was 2 to 3 cm dilated almost fully effaced and that my waters were bulging. Well that scared me, and it hurt so bad I almost threw up. She said to go right to L&D and that she would probably be delivering the baby because she was on call that night. That made me really happy because I really liked her. We went home to get my bag and a bottle of water because I knew they wouldn’t let me have any water once I got there. So we went to the hospital, got there a little before 11 and after they checked me again I was a full 3 cm, so they monitored Sean's heart rate for 20 min then they let me get in the tub which was so nice at that point because I was really hurting and the water felt so good. I was doing ok pain wise for a while, Kyle and I called both families and let everyone know Sean was on his way but around 2pm I was talking to my mom when I realized that I couldn’t talk through the contractions anymore so we put the phone down and just breathed through the contractions. I stayed in the tub until 3 when I decided that I wanted the epidural. At first I was really disappointed in myself because I wanted a natural birth but I had already been in labor for almost 12 hours so I gave in. they checked me again and I was 4 to 5 cm and they wanted to break my waters. So at 4 they gave me the epidural and then broke my waters, it hurt a lot and at that point I was really really glad I had the epidural even though it wasn't working yet. At 5 when it still wasn't working they called the dr. in to fix it because my right leg was completely numb but I could still feel the contractions everywhere else. Once he got it working I felt great and even took a nap. Then a little after 6 the dr. checked me and said I was ready to push, I was shocked because I thought it would take a lot longer than that. So at 6:30 I started pushing, it was really awesome because Kyle was right there with me, he held my leg so I could push better and at 7pm exactly my beautiful son was born. I threw up a few times while pushing because the contractions were so intense but it was the most wonderful amazing experience of my life and I can’t wait to do it all again. Kyle cut the cord and they cleaned him up really fast, he was back in my arms before I could even believe I was a mom. I was able to nurse him right away which made me so happy. The 1st night the nurse gave him 10cc of formula because she was worried that he wasn’t getting enough but looking back now I know he didn’t need it because he was nursing just fine by the time we left the hospital.
Share This Post With Others
Report Inappropriate Blog
Member Comments About This Blog Post