Well, goals for Tiz in June to be precise.  And yes, I know I'm a day late.  Blame it on the Bank Holiday.  You could say that unlike the Refuse Collectors mentioned in my blog yesterday, I haven't rushed to catch up.  I did turn the page on my calendar yesterday though.  Every year, Elaine or Sally [sometimes both] gift me a calendar during the Festive Season.  Neither of them have a computer so from their perspective it's an inexpensive but very useful gift.  I of course do use a computer and so, keep a digital calendar.  Hence their thoughtful gift isn't all that useful to me.  Last December it was Sally that presented me with a cat themed calendar.  Let's be honest here, I don't use it.  But I have been enjoying flicking over the picture each month.  And now I've decided to share the pleasure with you.  Just look at this little cutie. 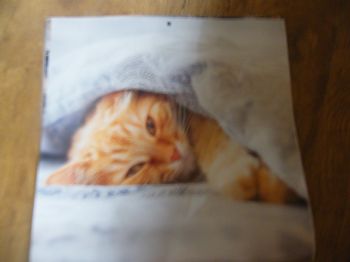 So, goals for Tiz in June then.  Well maybe finishing The Teams aspirations from March - those that haven't already been achieved:

The Research Assistant - Start up the family history research again.  [I started but kind of lost the impetus].

The Number Cruncher - A new pedometer - the old one died weeks ago.  [I tried to remember to pick up the mobile every time I moved around Base Camp but come on, who picks up their mobile when going to the loo or to the kitchen to make a cuppa?]

Financial Advisor - Look for alternative energy and broadband suppliers.  [I did look, still haven't done anything about it though].

The Psychologist - Another trip out - to The Bay again maybe? [If only the Countess de Clutter would get off my back].

As for weight, once more I'm aiming for 135lbs and 6oz to hit one stone lost since I started the daily walking.  And afterwards, 133lbs to be officially no longer overweight.  Beyond that I'm not considering it given I've been bumbling around in the upper end of the 130's for two and a half months now.  Which btw is exceedingly frustrating.

With encouragement [bullying?] from The Despot, I'm trying to up the ante exercise wise.  My daily walks are regularly 45 minutes now so I'm aiming to add another 15 minutes a day.  Maybe walking.  Or dancing.  Or using the home exercise equipment.  Whatever is easiest.  Well, not easiest, more whatever seems the most enjoyable so I'll stick with it.

Today I did an extra 15 minutes walking, so an hour in all.  Not enjoyable though.  My left knee and hip were both VERY painful.  It's quite some time since I had such pain for which I should be grateful.  But trust me I wasn't feeling thankful as I limped my way back to Basecamp at the end of my walk.  Not a good overall speed but the last part [on the flat] I still managed just over 3mph.  I'll take that as a 'win' given how much it was hurting.

What if any, are your June goals? Come on, let's do it.