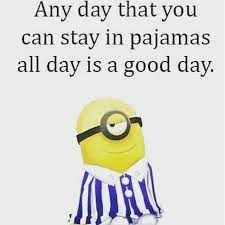 National Wear Your Pajamas to Work Day
Today's holiday is pretty self-explanatory: it is a day when people wear their pajamas to work! It is celebrated the day after income taxes are due in the United States. The presumption on the day is that people were working late the night before to finish their taxes, and by not getting out of their pajamas in the morning, they are able to save a little bit of time getting ready for work and can sleep a bit later. And with all the effort that was put in to finish taxes, those who did them deserve a day to be a little casual anyway. This day can be celebrated no matter where people work, whether it be in an office, at a store, at home, or somewhere else.

The history of pajamas goes back a few centuries. The word comes from piejamah, an Indian word for loose pants that were tied at the waist. That word came from a Persian word that meant "leg garment." Piejamahs were first used for afternoon naps, and eventually began being used for evening sleeping. They were worn in India, Hong Kong, and in some other British colonies, and were brought back to Britain, where they also gained in popularity.

In the West, including the United States, most people continued to wear long nightshirts until the late nineteenth century and early twentieth century. By the 1920s, men's nightshirts in America were replaced with loose-fitting trousers and button-up collarless tops. Women began wearing ankle-length trousers and hip-length tops made of chiffon, satin, and silk. In the 1934 film It Happened One Night, a romantic comedy starring Claudette Colbert and Clark Gable, Colbert wears Gable's pajamas. It is believed that the film influenced women to want to have pajama styles more similar to men's.

In the 1940s, women began wearing "shorty" pajamas, consisting of a smock top with frills at the hems, sleeves, and leg openings. These were the forerunners of Baby Doll pajamas, which began being popular with women in the 1960s. Unisex clothing, which included sleepwear, became more common in the 1970s. In more recent years, high-end pajamas have been becoming more fashionable.

There are many other types of pajamas made with many different materials. Footed pajamas were popular for a time. Heavy flannel pajamas are commonly worn during the winter and in colder climates, while light cotton pajamas are often worn during the summer and in warmer climates. Children often wear pajamas with cartoon characters, action heroes, animals, and more on them. Pajamas are usually worn at night, but in some instances are worn during the day and in public. This has become more accepted in recent years and is completely acceptable on National Wear Your Pajamas to Work Day.

Celebrate the day by wearing your pajamas to work! If you want to dress to impress, this may also be a good day to get a new pair of pajamas.

**Me: In the past 13 months, this day has been celebrated to the extreme!**

Did You Know ~
My friend, who got a job making pajamas, now tells everyone she's a soft wear engineer.
Share This Post With Others
Report Inappropriate Blog
Member Comments About This Blog Post