Hard to believe it's been 9 months since I blogged here. Maybe that was part of my problem.I avoided Spark and WW and anything else that had helped me lost and maintain my weight. I was an ostrich this past year, burying my head in the sand, ignoring what I was doing to myself.

I really thought I had it figured out after I hit LIFETIME at WW on 11/1/19, weighing in at 149.8. I maintained that weight from the time I hit it on 9/20/19 until the end of February 2020, never going more than 2 pounds over (a WW requirement to maintain Lifetime status). Then the Pandemic and Quarantine hit. My world crashed. I could no longer attend my weekly meetings and couldn't feel accountable to that WW scale. I tried attending the Zoom meetings for a while, but it was just not the same. I lost all motivation and felt justified for eating anything I wanted. After all, eating was all I had to look forward to, as I stayed home all day, every day. The excuses an addict can come up with!

I had decided that on Jan. 2, 2021, I would get back on track. I weighed in then at 240.0. I lost a few pounds and within the first week fell off the wagon, reverting to my old habits, and eating way too much. I also made no attempt to get any exercise during 2020, sitting all day long, watching TV, reading, and basically vegging out. Nor did I try to get moving when I got back on the wagon for those days in early 2021.

Late last week, I noticed a rash in my panniculus (that lower abdomen fat flap I am once again experiencing--due to the horrendous regain), something I had not experienced since my 300+ lb. days. I have some salve that takes care of it (clotrimazole--I got it from my doctor back in my super obese days, and have found it in an over the counter form), but I realized I was on my way back to my original weight, and all the problems that came with being morbidly obese, if I did not STOP right now. Monday morning I woke up with new resolve. I couldn't bear to get on the scale because I feared the number I would see. But after being on track all day Monday, I did get on the scale Tuesday morning. I was surprised that the scale only read 247.8. ONLY? But that was just a 7.8 lb. gain over the last two months, which considering how I was eating, was a minor miracle.

I'm on my fourth day now of getting back on track. The Prostate Cancer Foundation is sponsoring a "Walk or Run 100 Miles in March Challenge" right now, and I decided that would be a good way to get me moving again. My husband Duane has been fighting prostate cancer since Feb. of 2013. At the time he was diagnosed, doctors told us that four and a half years was the average life expectancy after a diagnosis like his (it has metastasized, and is considered Stage 4), and here we still are, fighting, living, and loving each other even more, 8 years later. But I know we may be getting towards the end of our battle. We have been through so many treatments, and in January, Duane started chemotherapy, one of the last treatments available for prostate cancer. It won't cure him, but we are praying for more time. Of course he is losing his hair, but overall his side effects have been minimal. Plus the pain in his hip (where the cancer has spread) has gone away, and walking is easier for him. He even walked down the road with me Tuesday. The weather here in Nebraska has been beautiful the last week, after some sub sub zero temps earlier in February. I'm talking record setting lows, like -40! And lots of snow! So it's nice to be able to get outside again in these 50-60 degree temps we've been lucky enough to get in March! I am so grateful to have my Duane still with me as he so bravely faces all the treatments he has undergone.

Much has happened to me personally since I last blogged. We had a small celebration for our 50th Wedding Anniversary on 9/4/20. Just our kids and their families, and Duane's sister attended, but we bought pizza and a cake and my professional photographer niece took some pictures as her gift to us. 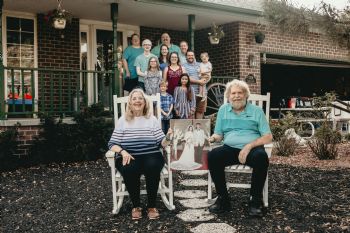 That's our family behind us on our front porch steps. I saw a picture similar to this on Pinterest years ago and dreamed of having one like it for my 50th. So I really really like this picture. You can see my weight gain in the picture, but it's not nearly as bad back then as it got!! 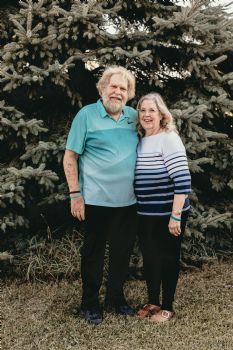 My sister-in-law had a collage picture frame made for us with pictures of our wedding and 50 years of family photos. She mounted them on a window frame she saved from our Grandparent's house in Iowa, that was torn down a few years ago. I absolutely love it. I have a picture and tried to download it here, but Spark tells me the picture is too large to download. Oh well. Suffice it to say, it's hanging in a place of honor in my house!

One week after our anniversary we appeared (via phone camera) on the Today Show with Hoda and Jenna, as their "Best Fans Friday" winners. What a thrill to be on TV again, the same show I was featured on in 2012 for losing 178 lbs. Only this time we didn't get to travel to NYC. But we were winners of two beautiful gold watches and Bloomingdales Department Store, who gave us the watches, also sent us a check for almost $500 to "cover taxes on the watches." We used the $500 to buy a 70" smart TV, which we are both loving so much! 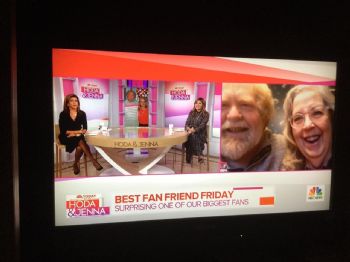 Earlier in the summer Duane and I were on our local TV channel here in Lincoln, interviewed by a reporter regarding our efforts to support the virtual (this year) Cancer Walkathon to raise funds for cancer research. I guess it was our year to be on TV!

It was fun to be on TV, but I could sure notice my weight gain.Thank goodness it was before I gained SO MUCH weight, and hopefully I didn't look horrible. Because today I look HORRIBLE! My butt is huge again as is my stomach. Funny thing is, with this weight gain (and I have had many in the past 12 years--each regain a little more--since I started this journey) my fingers haven't gotten too fat, because my rings still come off. But nothing else fits. I have some fat clothes from my other regains, but of course I am even growing out of those. Hopefully soon I will fit back into some of them, and eventually into every beautiful item of clothing I have hanging in my closet from my 150-lb. days. All the clothes from my 300+ lb. days are long gone, after procrastinating several years, I finally gave them all away. I really never want those clothes to be the only ones that fit ever again!

It was quite an eventful year, even though we were quarantined. I hope 2021 is my year to get back to goal weight and live healthier again. I feel so much better physically and mentally when I weigh less. Wish me luck!