Why I Started (for the WEC) 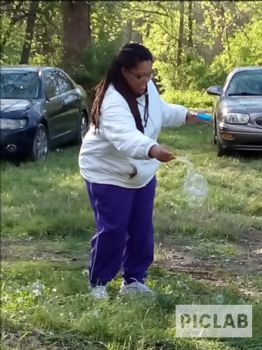 Six years ago, I had just moved to OH from RI. Though I was having fun in the picture (playing with bubbles), it wasn’t until I SAW this picture that I realized I had let my weight get out of hand. I didn’t recognize that it was me (though I could tell by my hair and that I was wearing my FAVORITE color of purple). I was in a state of deep depression, anxiety and even struggling with PTSD before the move. My spouse felt a change of scenery would be good for me since the night terrors I kept reliving happened every time I saw my former abuser (my daughter’s father).

I knew that I needed help ASAP. So I did what I knew worked best for me in the past, and that was finding the local Weight Watchers studio and joined again. I had success with the program before, as well as returning to Sparkpeople and becoming ACTIVE with the groups (there are so many great ones to choose from)

Somehow, I came across the Biggest Loser Challenge group (I was a huge fan of the TV show at the time), and found a team that provided encouragement and support that I needed. That was critical for me because I was the only one in my household (at the time) focusing on my health; being able to communicate with others online some of the challenges I was experiencing made me feel like I was not alone. And folks were also there to cheer on my successes as well!

I have experienced a few setbacks along the way, but I made a PROMISE to myself the last time I walked through the WW doors (and found new groups on SP) that no matter how long it took to reach my weight goal, I would NOT QUIT! (Been there, done that, bought the t-shirt

). I am extremely grateful for ALL of the things I’ve experienced along the way, and KNOW that I WILL reach my goal. I remain humbled by the myriad of lessons I learned.

That picture is considered my “before” photo; I also consider it my “NEVER AGAIN” photo! Though my “why” has changed (a few times since then), I still look at it from time to time and appreciate ALL of the progress I’ve made (ESPECIALLY the non-scale victories)!
Share This Post With Others
Report Inappropriate Blog
Member Comments About This Blog Post