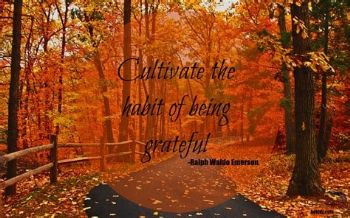 "Cultivate the habit of being grateful." Ralph Waldo Emerson 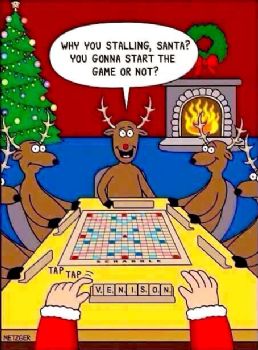 "Why you stalling, Santa? You gonna start the game or not?" TILES ON SANTA's TRAY: VENISON 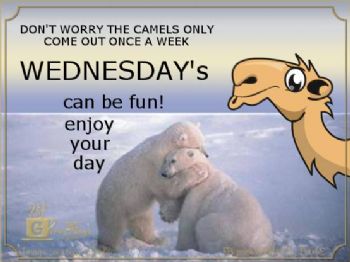 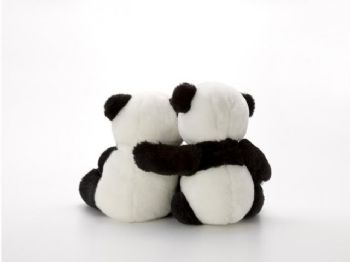 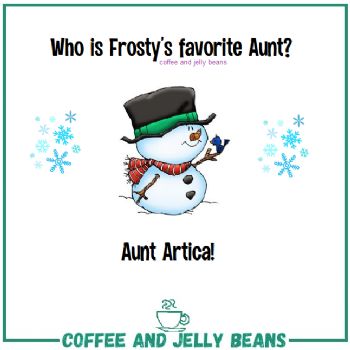 It's National Mutt Day! This day honors our canine friends that are a mix of breeds and whose ancestry is unknown. But that doesn't stop us loving our special friends. This holiday is celebrated twice a year, today and July 31, to increase the awareness of the loving mutts that are in shelters and in need of forever homes.
--Business of Popping Corn Day: today commemorates the founding of C. Cretors and Company in 1885 by Charles Cretors, the designer of the first commercial popcorn machine; popcorn was first made at home in long-handled wire boxes over fire; Cretors used a peanut roaster and redesigned it for popping popcorn in large batches.
--International Day for the Abolition of Slavery: today is an UN initiative; there are over 40 million victims of modern slavery; although modern slavery is not defined in law, it is used as an umbrella term covering practices such as forced labour, debt bondage, forced marriage, and human trafficking; essentially, it refers to situations of exploitation that a person cannot refuse or leave because of threats, violence, coercion, deception, and/or abuse of power; more than 150 million children are subject to child labour, accounting for almost one in ten children around the world.
--National Fritters Day: today is a salute to a yummy pan- or deep-fried batter or breading, sometimes filled with meat, vegetables, or fruit; can be a dessert or a side dish at dinner.
--National Package Protection Day: observed the Wednesday after Thanksgiving; today reminds us to stay alert during this season of online shopping and packages being left on porches which is convenient for us but tempting for thieves.
--National Play Basketball Day: no clear info as to why today but basketball was created in early December, 1891, by Canadian physician James Naismith as a less physical contact sport for the Springfield, Massachusetts, YMCA.
--Rockefeller Center Christmas Lighting Day: observed the Wednesday after Thanksgiving; so look for it on TV tonight. From MSN: The Rockefeller Center Christmas tree draws throngs of people to Midtown each year to celebrate the holidays. The tradition started in the 1930s, when construction workers at Rockefeller Center pooled their money to buy a tree. Officials at Rockefeller Center later formalized the event, especially today’s lighting ceremony, which will be attended by thousands of onlookers. Each year’s tree is selected by the head gardener at Rockefeller Center and topped with a huge star adorned with Swarovski crystals. This year, the tree introduces a new star designed by architect Daniel Libeskind—it weighs 900 pounds, is more than 9 feet in diameter, and features 70 spikes and three million crystals outfitted with LED lights to emit rays in all directions. In January, the tree is milled, and the lumber donated to Habitat for Humanity. We think Santa would approve.
--Safety Razor Day: a salute to the implement that safely keeps us hair-free; honors the tool of injury-free shaving; first patented in 1880 even though there were other versions before it.
--Special Education Day: today is a salute to a very special group of educators (yay, SPEDED!); from nationaltoday:
On December 2nd, National Special Education Day commemorates the anniversary of the nation’s first federal special education law.  The Individuals with Disabilities Education Act (IDEA) was signed into law on December 2, 1972.
IDEA made education available to all American children and this day honors the progress that has been made in special education. Before IDEA, many individuals with disabilities received little to no education. Schools were not required to make accommodations for children with disabilities. While some states offered special schools, the education and resources were not necessarily equal. Additionally, many parents couldn’t afford to send their children away to a special school.
The law stipulated that children with disabilities had a right to the same free education that every other child had access to. Between the ages of 3 and 21, there are 13 different areas where children may qualify under the IDEA for services. IDEA was instrumental in increasing graduation rates for students with disabilities.
IDEA resulted in many changes beyond bringing students equal education. The integration of students also helps to remove the stigma of disabilities. Another result of IDEA was the stimulation of technology for students with disabilities and for the classrooms. These technologies improved the education of all students.
--Special Kids Day: observed the first Wednesday of December; today is in honor of a not-for-profit organization by that name who holds celebrations for children with disabilities and their families in safe environments adjusted for their needs
--Women Wednesday: observed the Wednesday after Thanksgiving; today is a movement to ensure women receive the spotlight and support they deserve; the average female entrepreneur receives less than half of the funding of her male counterpart; listen, support and stand up for all types of women.
--In 1970, President Richard Nixon established the U.S. Environmental Protection Agency in the wake of rising environmental pollution. William D. Ruckelsaus became the first director of the agency that advised the president on environmental matters.