The Man of La Mancha

Man of La Mancha stumbled into theaters on a quest in 1965. Until yesterday, I had never watched the movie - I knew the song, The Impossible Dream. I knew he was crazy - that he thought he was a knight, tilting @ windmills, deciding the bar prostitute was his beloved, & so much more. I didn’t know it was a movie based on a play (it originally was a musical play about a play) I tried to watch it yesterday, but between feeling poorly & just being lost from the get go, I put it off for today. Still not clear, but I’ll do my best. ( BTW, La Mancha Is a area in Spain) 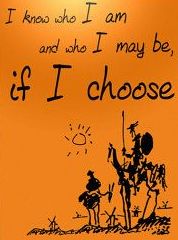 The show starts somewhere in the 1600s, with people prancing around in a village, obviously some sort of show (some people had half horse costumes, there was what looked like a burn @ the stake, but with obvious thin red fabric acting a fire ... ) A man is arrested by the Inquisition, charged with foreclosing on a monastery. He introduced himself to fellow prisoners Miguel de Cervantes., an actor, author, etc. Others waiting on their Inquisition, jumped on him & his manservant. “The Governor” & “The Duke” ruled the other prisoners, & stopped them from assaulting Cervantes & taking his theatrical box. Yada, yada, yada, Cervantes is saying he was guilty, & wanted to put on a play with the prisoners acting as a jury. (?) He puts on makeup & prosthetics & announces he is Alonso Quijano, an elderly man who thinks he is a night-errant, named Don Quixote. He & his man servant, now named Sancho. 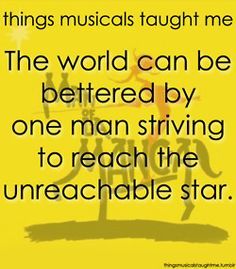 They are riding a horse (Quixote) & a donkey (Sancho). Quixote sees huge 4 limbed windmills & identified them a giants. He attracted, got knocked down several times, finally leaving with Sancho. Thry make their way to a run down inn, which Quixote claims is a castle. More stuff ... Quixote sees the bar woman (other rather rough men try to pay her for her charms - she spits @ them).Her name is Aldonza, but Quixote calls her Dulcinea & treats her like a queen. She thinks he is trying to shame her, but Quixote is serious. Meanwhile, Don Quixote’s niece & housekeeper are looking for him. They ask a priest for help, but the priest realizes they are motivated less in their concern about being embarrassed by a confused elderly man (Quijano) than his safety. 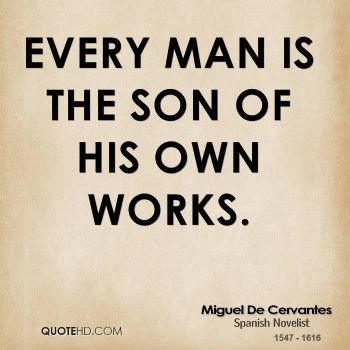 OK, more confusion as the story pops back to the Inquisition prison, they pick out some more players for the play, pops back to the Quixote character. More stuff happens. Quixote asks the owner of the inn (thinking he was the king of the castle) to dub him a knight - he thinks that’s why he failed to kill the giants. More things happen. The fiancé of the niece tracks Quijano/Quixote to the inn.The ruffians @ the inn try to get Aldonza to share her charms, but she resists. Quixote attempts to protect her, but basically bumbles & manages to knock them out. He is also injured, but begs his Dulcinea to help the injured men. Didn’t go well for her, as the grab her, abuse her & kidnap her. Quixote & Sancho search & find her, abandoned. The Lille group is found by a knight (& comrades) in very shiny armor, The knight (actually the fiancé os the niece), confronts Quixote, first telling him his is Quixote’s worse enemy, the Enchanter. They shiny knight blind Quixote & force him to realize he is the elderly man, Quijano. Alas, poor old Quijano swoons, feeling like he is dying.”Dulcinea” bursts into the sick man’s bedroom. He flip flops back to Quixote- declares his love, dies, Popping back to the Inquisition prison - Cervantes & his manservant are taken up to meet the Inquisitors ... they start the long climb up the stairs. 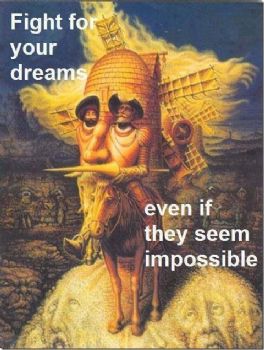 The best part of the whole movie is The Impossible Dream.
EVERY male singers (& som females) seem to have recorded it! 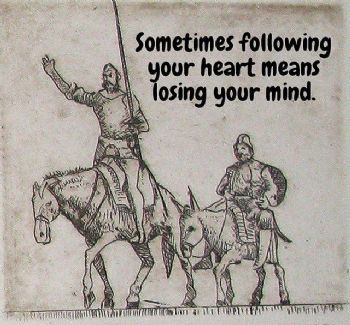 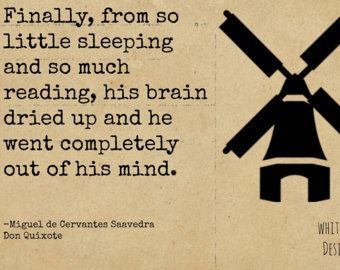 This is my quest, to follow that star
No matter how hopeless, no matter how far
To fight for the right
Without question or pause
To be willing to march
Into hell for a heavenly cause
And I know if I'll only be true
To this glorious quest
That my heart will lay peaceful and calm
When I'm laid to my rest 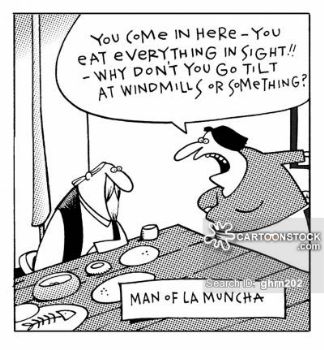 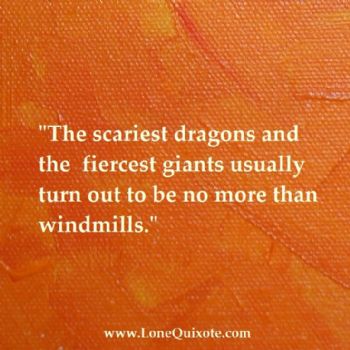 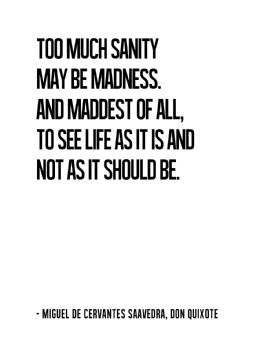 So, after seeing the film, & gaining over Wikipedia ... I just like the The Impossible Dream . I used to tell people the main character who sings this song is certifiable. 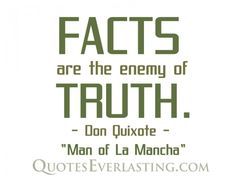