For over ten years now I have seriously studied my own behavior regarding my diet mostly, and have tried to figure out why I am a food addict. I have looked at my patterns, my binges, my gains and losses, just about everything having to do with my weight, and why I struggle with it so much. I guess in a way, I want to make it easier to maintain my loss, which was really hard to come by, but so far I haven't really found any good solid answers. I do know one thing, you can never give up, and every day is a chance to start over! I learned that at Spark!!!

I have no trauma in my childhood and or even adulthood that some people point to as leading to their weight gain. I was a skinny young kid and I remember sitting at the table for hours, long after everyone else had finished, as my mother tried to get me to clean my plate. So evidently food wasn't that much of an addiction for me back then, in fact I guess I didn't even like some of it very well. As I entered adolescence, however, that changed. Food started tasting really good, and of course the ultimate weight gain followed.

I have always had a sweet tooth, loving candy and desserts. But I also love carbs/salty treats too. Basically I love anything that's not very good for me. And I recognize that.

Lately, I have also come to the conclusion that a little sweets leads to a LOT of sweets and if I'm not careful, a binge on sweets. And when I'm talking binge, sometimes my binges can last a year or more. After I lost weight and got back to my 150 lb. goal for my son's wedding in 2016, I went off track again, and didn't really get back on track until 2019, when I weighed almost 240 lbs. I'm sure I was on my way back to 328 lbs. Thank goodness my friend intervened shortly after Christmas 2018, and got me back on track with WW. 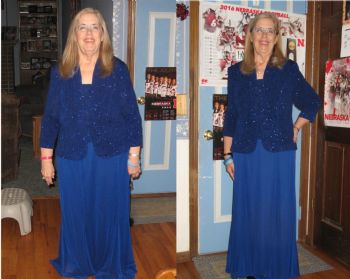 When I hit Lifetime with WW back on Nov. 1, 2019, I was sure I had found the secret. HAH! As I have often said there is NO secret to weight loss/maintenance, it's just hard work every single day of your life. And it remains that way. So I don't know what I was thinking. But hitting WW Lifetime was such a huge accomplishment for me. Although I had made my 150 lbs. goal several times since losing that initial 178 lbs., first hitting it back in 2011, that was with Spark and on my own. Having joined WW numerous times between 1974 and 2019, and never hitting goal or lifetime, I really thought that officially hitting that Lifetime milestone would be the end for me. I would finally have this all figured out. Guess what?! I don't! And at this point I don't think I ever will.

So I have come to several realizations about my own behavior.

Realization Number 1: Sweets leads to more sweets, which leads to binges, some of which last for years.

Realization Number 2: If the food is in my house I will hunt it down (unless my husband hides it, which I have asked him to do many times), and I WILL EAT IT! So I need to practice restraint at the grocery store and NOT BUY THE JUNK IN THE FIRST PLACE!

Realization Number 3: I love mindless eating. By mindless eating, I mean sitting in front of the TV, stuffing my mouth constantly with food. Boredom adds to this habit, so I need to: 1) Have healthy morsels ready to grab so I can stuff them in my mouth (frozen grapes, radishes, strawberries); and 2) I need to avoid the boredome. I have started doing counted cross stitch projects again to keep my hands and mind busy as I watch TV.

Realization Number 4: If I am hungry, all bets are off. The willpower is way down, and I always cave. I need to remember not to go to social gatherings (when and if they ever resume) hungry, because it's at those occasions where it's especially hard for me to avoid temptation, for example weddings, parties, basically anywhere food is served. It is easier for me to stay strong and avoid temptation if I am not starving, so I need to remember to either eat well before attending one of these events, or have a healthy snack in my purse as an alternative to all the food being served, which is usually not especially healthy.

Realization Number 5: I need to keep moving to promote the weight loss. For most of 2020, I was getting in an average of 13,000 steps every day. I joined Step Bet after Step Bet to keep me motivated, and it really worked. Of course just walking won't keep the weight off if you eat too much, but it does help a little, at least maybe not to gain quite so fast. But then I got shin splints. It was so painful. It was in my left leg, which was the last knee I had reaplaced last June, and I was just sure I had gotten an infection somehow and would have to have the knee done again. In early April, I made an appt. with my orthopedic doctor, which got re-scheduled after the Pandemic, until June, which wasn't doing me much good. They deemed it "Not an Emergency," I guess and decided I could wait. I continued to walk quite a bit even after the pain set in, because walking didn't seem to be bothering it that much. It was trying to bend the knee and when I laid in bed that it got extremely painful. That I had a thought: "Could this be shin splints?" I have never had anything like that but my oldest son had them as he trained for his Boston Marathon, which had been either cancelled for the year, or maybe re-scheduled for this Fall. So I talked to him and he said he would get them when he had run too many miles in his shoes and they were wearing out. A bell went off in my head, because a great majority of my steps this Winter were INSIDE my house, in my stocking feet. I didn't even wear shoes. So for the last three weeks I haven't walked much at all, and the pain is GONE! Hallelujah. This week, I decided (as I got back on track with my eating) to start trying to walk a little. So far I have been averaging 6,000/steps per day which is a good start. But now I walk with my shoes ON, and mostly outside the house! I will try to slowly build back up to my 13,000, but if I experience any pain, I will have to rest the leg once again. Wish me luck with that!

So those are my weight-loss/maintenance realizations as I have analyzed my own behavior. I'm sure many of you share the same discoveries when you look at why you gain weight and also why it's so hard to maintain a weight loss. I'm not sure if just KNOWING these things about myself will help me avoid the pitfalls, but I'm really going to try. And I hope it will help to have written them down here as a reference to look back on. Every time I lost weight in this past 11+ years, I think this is the LAST TIME! I'm going to keep it off this time. At least this time it was only a 25 pound regain, 5 of which are gone already, before I got back on track. For that I thank WW and my friend Deb, who even though I haven't seen her for months, continues to hold me accountable with daily texts, and now I feel like I'm back on solid, WW tracking ground!
Share This Post With Others
Report Inappropriate Blog
Member Comments About This Blog Post