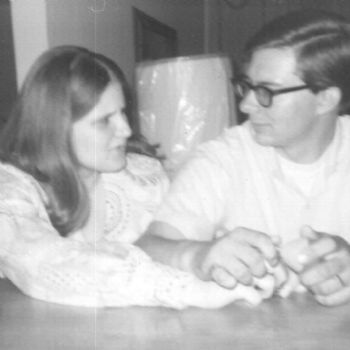 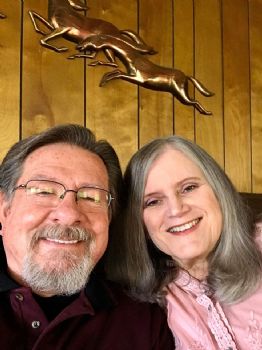 This is us, Michael and myself, just a few days after we were married. I suppose you could say this is our wedding photo. No big wedding or pretty photo book, but we couldn't have been happier as we held hands and just felt the love between us.

One Saturday morning, April 18, 1970, we took off for Las Vegas. I was 19, Michael was 24. How exciting! We only had enough money for a wedding license and the chapel. We arrived at the chapel, which was very cute and very empty. There was just me and Michael and the man and woman who ran the thing and an older gentleman in a wrinkled black suit. His head swiveled, bible in his open hands, eyes unfocused, making sure he spoke to all in attendance. Not sure who he saw behind us since we were the only ones in this little chapel.

In a few minutes, we were married.

After that, we went to Circus Circus. Wow.. the colors, the noise, the bells and whistles, the costumes and all those people. We put some coins in a machine and played for awhile. We were winning BIG. Soon it was time to cash in and go home as we didn't have enough money to stay over. I had never seen so many coins. The coins filled half a bucket. The weight alone was impressive. We traded all those nickels for a five dollar bill! Maybe we had McDonald's with it.

We took off in the Nova. Excited and having a good time. It wasn't an hour into our drive home when I felt the sewing give way on the seat of my light weight cotton pants. Just twisting this way and that way, trying to get comfortable in the car, caused the seam to pop more and more. In a few more hours, there was nothing left of the seat of my pants. Never buy UN reinforced stitching in cotton pants! We laughed.. We'd been married maybe 12 hours. That's what you do. Laugh a lot!

We were motoring right along, enjoying each other and wondering if the minister was for real. Maybe he was a street person. Maybe we weren't really married. Then we laughed some more. As soon as we got to Burbank, the Nova decided it wasn't going any farther. It was dying of thirst. Michael knew just what to do. We had a cooler in the back which held nothing but water. The ice had melted long ago. Michael dumped the water into the radiator and we were off for the last part of our adventure.

A couple miles later, we reached our little upstairs apartment in North Hollywood. I'm sure Michael was thinking about fixing the Nova and our delicate financial situation. I'm thinking..How do I get to the front door with my rear end half exposed. It was dark and no one was around. No problem! We were home.

What an adventure as we entered our new apartment. Tired but happy and thrilled to be home. It was a bit breezy behind me however. But only I felt it for some reason.
Happy 50th Anniversary Michael. I love you now and forever.????