Three weeks of lockdown in France and counting...

So.... last July we made the permanent to France and we are just so very glad we did!

Three weeks ago, having followed the progress of the COVID-19 Coronavirus from Wuhan in China, across the world to mainland Europe, France was declared to be legally in lockdown.

I live with my husband, Laurie and our two rescue dogs, Zaba and Nogi, in the beautiful South of France. My daughter lives in London and Laurie’s adult children, two of them near London and one in Budapest.

We are so lucky! We both enjoy fairly good health, despite being overweight. Laurie was a very sporty type in his youth, a keen swimmer and canoeist, unlike me. These days we enjoy walking our dogs and I love working out, having set up some equipment at home and having had gym membership in the UK and a PT who gave me a good start to build on.

Since the lockdown, we have come to realise how much we really like each other. I know that sounds funny, as we’ve been married for seven years ( we had our seventh anniversary just over a week ago!) but since We moved to France, we spend little time apart and ... ‘it works!’
We’ve also learnt that we can be far more tolerant with each other than we ever imagined, and that an ever present sense of humour is essential. I’ve also learnt that I am so much stronger emotionally than I ever expected; I hate my daughter being away from me at this time and love the fact that we are closer than ever in our relationship, despite the distance. When this is over, later in the year, she will be coming to live in France, for how long I don’t know, but I am so looking forward to that.

A couple of weeks ago, as our lockdown started, my daughter decided that she needed to move house, but the new place doesn’t allow pets. Problem - the cats couldn’t be moved here yet because of innoculations; solution - we managed to find a cattery to take them, probably for a couple of months. She moved house on 1st April and the change in her is amazing, she is just so much happier! Today we FaceTimed and she announced that she and two of her housemates had been pressure washing the patio and tidying up the garden; on Thursday they plan to have a barbeque, and all this with a huge smile on her face. What’s more, she’s been buying fruit and vegetables and helping one of her friends who is also a housemate develop a healthier lifestyle; I am just bursting with pride!

So yes, it’s an awful time in the world, but there is still so much to be thankful for. Laurie has asthma, so I am doing the shopping trips, which we are only allowed one person at a time. He is very worried about the prospect of getting the virus, as he was one point shy of COPD during his last asthma check and is 66 in May. I am somewhat more positive, probably because I had parents who survived awful times in WW2, so I tell him constantly that we do all the right things and so we’ll both be ok. We have to sign a document each time we leave the house in case we are stopped by the police. We walk the dogs together, that’s ok. Tomorrow, before shopping, I will make a couple of masks, just as an extra precaution. I’ll also stock upon frozen veggies, as well as UHT milk, eggs and other foods so that I don’t need to shop for a couple of weeks. We sorted out the larder yesterday, so that’s a bonus.

We can do this and who knows, maybe we’ll come out the other side slimmer and fitter too!

Now, I’ll take a tip from Zaba - time for bed! ( and I hope he doesn’t get me up twice during the night like last night!) 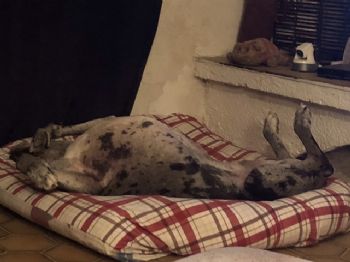 And night-night from Nogi too! 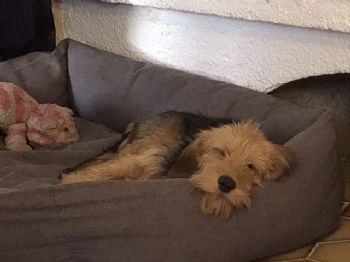