As of yesterday I feel like I'm finally getting out of a pretty serious slump and getting back on track with eating right, exercising, and overall self-care. The last three weeks have been incredibly difficult for me. I started to have major issues with PTSD which led to severe anxiety and panic attacks, but with the help of a great support network, I think I'm finally starting to get back on my feet a little bit.

The week of 12/2 to 12/9, I had 111,000 steps and then everything toppled downhill--my eating, my exercise, pretty much all of my self-care. It took everything out of me to get out of bed in the morning and get to work. Eating was one of my comfort sources and once I got home I basically just slept as much as I could. In between all that, I was contending with horrendous flashbacks, panic attacks, and shattering anxiety, so to have a day like yesterday brings me a lot of hope.

Yesterday I turned on Netflix and realized that the new Witcher series had finally been released. Using the Sparkpeople "10 minutes of exercise" idea, I told myself that if I did just a ten minute workout, then I could sit down and watch it. That ten minutes turned into 70 minutes of working out in front of the TV while I watched an episode of the show which put me at 10,000 steps for the first time in 10 days. It felt great.

And then came the time for me to upload my steps into my Wokamon app and see what progress my morning workout had earned me. Turns out, all the experience I earned yesterday morning earned me enough progress to actually get an entirely new Wokamon. So meet Unclebaky, the little bread man who currently has no accessories because I can't afford them but he's still cute anyway. I even managed to level him up to Level 147 which I thought was pretty fantastic for his first day in the world. 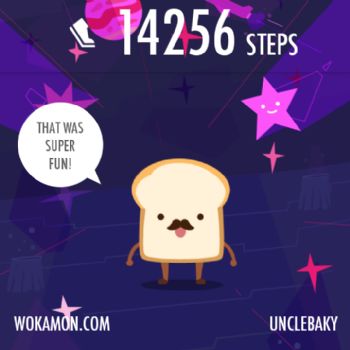 Getting Unclebaky got me motivated to start working out again and it also got me thinking about how many miles I've put in for 2019. I used to log my miles on a website called Moon Joggers, so I looked into it and it turns out that (1) the website is still around and (2) my account still exists. It turns out that I don't really have great records of my workouts going back to before July of this year, but I put in what I could and it turns out that I did the following miles for 2019:

It took quite a while to put all my mileage into my log, but I was really excited to find out that doing so put me over a milestone for total Moon Joggers mileage since I joined in 2015 (I've logged miles in 2015, 2016, and now 2019.) As of December 21, I have officially logged 750 MJ miles and ranked up to the level of Moon Jogger Private. How cool is that? 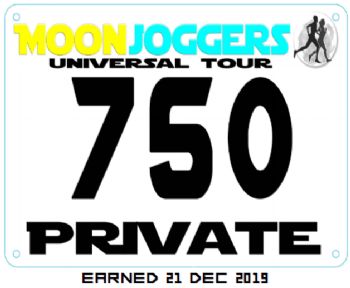 So yeah, all that lengthy post to say that right now things are feeling much better than they were even two or three days ago. I'm finally feeling like a human again and I'm very much looking forward to getting my 10+ minute workout in today after sneaking in some crochet time and a nice warm mug of coffee. I'm off work until January 6, so my goal for the rest of the year is continue making strides toward good mental health. And in the meantime, hopefully that means adding a bunch of miles to my Moon Joggers log and leveling up Unclebaky a whole bunch more!
Share This Post With Others
Report Inappropriate Blog
Member Comments About This Blog Post