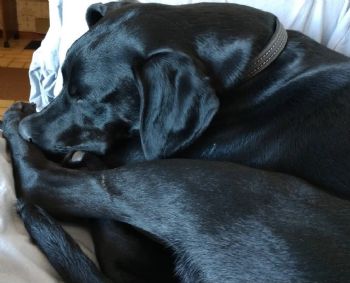 That photo is of Carl, curled up in a corner of my couch and listening to Karen Carpenter's Christmas album. He really mellows out to mellow music. My son and I talked about Carl's taste in music yesterday when he came to collect his pup.

My son plays the music at his house in the living room, even when he's in his home office working. He has more than one genre in his repertoire. And when he's in the office, he boosts the volume, so he can easily hear it. When it's something mellow, Carl is content to remain in the living room, and soak in the music. When it's something loud and angry sounding, Carl retreats to the office and lays at his Daddy's feet (protect me from that stuff, Dad!). I totally get it, Carl.

We also talked about the differing vocabulary in our discussions with Carl. Son says that he and Carl have the clear concept that some things belong to Carl, and some are Dad's things! When it comes to treats, there's a difference between things that are "not for puppies" and things that are.

At Grandma's house, we're more specific. I tell him that something is "not for Carl". Sometimes I tell him something I am eating is "human food" not "puppy food", and that it might make him sick.

When Carl left at the end of his day, I once again opened the sliding door, and announced, in ordinary adult English: "Prisoner, Rubia, Carl is gone, you are free to reclaim the house any time you are ready." Closed the door and went about my business. Sure enough, within 20 minutes, I had two kitties at the door. 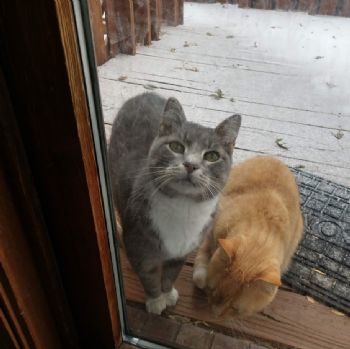 Back to normal. Cats do not seem to have affinity for music that Carl does. They seek out my presence, regardless of whatever sound I have playing.

Oh, and I had to go look up the origin of the phrase, apparently (per Dr. Google) "Music has charms to soothe a savage breast" comes from a play, by William Congreve, an English author in the 1600's - 1700's. The play? The Mourning Bride. Trivia I did not know before, but I am familiar with the warping of the phrase to "savage beast", made popular in King Kong movies.

Here's hoping we all take on this Tuesday, December 10, 2019, and make good decisions related to our own health and well-being, physical, mental, emotional, and spiritual. After all, it's the only "present" we ever get!