Well, folks, I tried. I opened the door onto the deck as the doorbell rang, and I knew Carl was on the other side of the front door. I hoped the Prisoner, who had been eating his breakfast, would take the hint. He did not.

Instead, he ran to the family room, and cowered behind the leather couch. I had Carl inside, on the leash by now. Told my son to go ahead and go to work... I've got this.

Yeah. Eventually these animals will have to figure out how to coexist. Because... Winter is Coming!

Eventually, Prisoner settled for under the couch in the parlor (or as Cary Grant called it in Philadelphia Story, "the talking room").

I remained calm as Carl poked his nose under and got at least confronted (puppy yelp... your own darn fault, Carl... this kitty lives here). Carl finds this interactive thing fascinating. It's not that he doesn't know what a cat is, he lives with two of them at his Daddy's house. But mine have managed to avoid him for the most part, the whole six months of his coming to "day care".

So, I decided this was as good a day as any for them to introduce themselves. As I remained calm, Carl's calm puppy came out, too. He still was excited to have an interactive playmate: 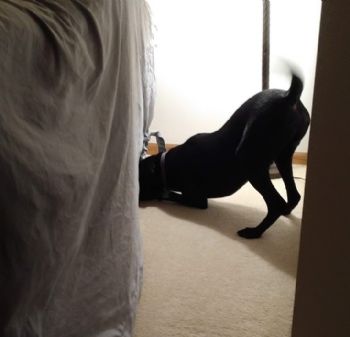 I gave the cat a couple of good opportunities to change his position, taking the dog out into the back yard to fetch sticks, do his business, and to clean up after him. I left the basement door open for the kitty to escape, should he so choose. Prisoner stood his ground.

Then I took Carl for a leash walk about 8:30 a.m. Again left the basement door open. Carl loves the great outdoors, especially now that it's cooler. He has discovered squirrels, and that they run up trees when he dashes toward them. He was already a huge fan of birds, as prior blogs have noted. He also loves the crunchy fallen leaves... they make noise!

We came back, happy Carl, happy Grandma... but Prisoner was still under that parlor couch. While I got Carl out of his harness, Prisoner finally relented and escaped to the basement. Door is now closed, animals are on separate levels of the house. Peace reigns. Sort of. Perhaps I should call it detente.

Carl does not have a prong collar. He has a harness that will turn him back toward his walker if he tries to pull. My son explained that to me: it's not for Carl's benefit, it's for us humans. Son had determined that the tug of the harness turn was less than the shoulder yank of using the prong collar. Regardless, he was a good walker this morning, did not need yanking at all.

And we have discovered that giving him a sponge bath after he's rolled in something foul *does* work, if I get to it in a hurry. Having two stone cold killers in the house (the cats) means they on occasion leave the remains in the yard. Carl found "something" in the long grass this morning, started to roll in it, and was a good dog, stopped and came when I told him to leave it. Sure enough when we got inside, I could smell it on him... so attempted something shy of a full bath. 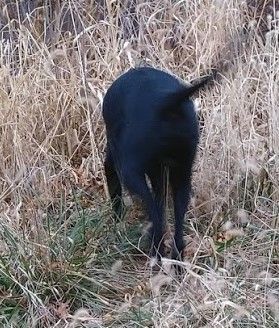 But mostly, pup just wants to have fun... 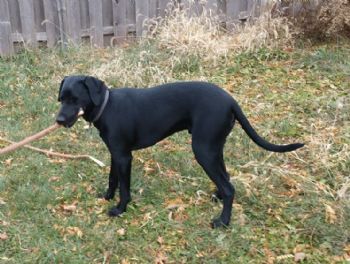 And grandmas love their calm puppies!

Here's hoping my Spark buds have a great Monday, November 18, 2019, making choices to support your very own "experiment of one". After all, it's the only one we'll ever get, and each and every one of us is worth taking care of.