Fritzy had Monday off so we had a long weekend this weekend. It was a really nice weekend. I got a lot of work done on our bedroom, been fixing it up and getting it to looking more like we want it. My cousin Delta moved into our old bedroom and we are now in a different room that has its own entrance so we can have company come in without bothering the rest of the family. Wyatt came over this weekend and played video games with Fritzy so he really enjoyed that. I think my pneumonia might be starting to get a bit better, too.

My fitness has been good in the respect that I'm moving all the time. I've been cleaning and moving around the house pretty much constantly. It's not showing up on the scale at all, not sure why, I haven't been able to do any traditional fitness because of the pain in my side and my back and ankles but I've been doing so much work around the house that I know that counts even though I haven't timed it and recorded it here on Spark. I did find almost all my workout gear, though! I found one of my resistance bands today and I found my foam roller which I was excited about. I am just missing my purple resistance band, my weight lifting gloves, and my massager now, plus I need to replace my pushup bars. Otherwise everything is back in order, so I'm ready to workout. I do need to find my workout DVDs though. But my DVD player is ready to get set up. Once the bedroom is all cleaned up there should be space to work out in there if it's possible to see the tv from that vantage point?? At least you'll be able to HEAR the tv from that vantage point anyway. I think I know where my yoga mat is but I have to find my yoga blanket as well because there's hardwood floor in our room and my sensitive body does not get along with hardwood floor. There is a rug on our floor though.

As far as nutrition goes I've been doing better lately. My calories have been lower, my sodium has been lower, sugar has been lower, but still not seeing a change on the scale. I'm sitting at around 273 which I would've expected to be lower than that considering I'm doing so much physical work right now and eating better but what do you do. I think I'm looking better, though, judging by my pictures. Here's some pictures to compare from July to now.
July 2019 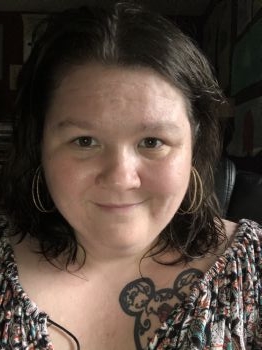 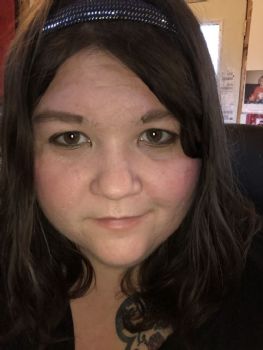 So I think you can definitely see a difference. I'll just have to keep working at it. I'll meet my goals eventually. I have to if I want to fit back into my clothes!

I found some more of my Buddhist books, but not all of them. I don't know where they could be, but I'm hoping they turn up because they are really important to me. At least I have a start on them. I'm planning to start studying the dhamma again soon and getting back into meditation but at least I got my shrine set up again and it actually looks even better than it did in my old bedroom. I don't have my zafu and zabuton set up and actually don't know where they even are and don't know where I will even put them but that's something to think about another day. I had a window seat in my old room which was my meditation corner but I don't have anything like that in my new room. Fritzy has a gaming station instead. But I will think of something. My shrine is all set up on my desk which is nice and I can meditate in my computer chair but I still want to be able to set up my zafu and zabuton.

Drinking a little less water lately and slightly more coffee and soda. Could be contributing to bloat? Have to get back to drinking water. Probably been drinking more coffee because I bought myself a pack of cigarettes yesterday and was smoking, although I did share some with Wyatt so I didn't smoke all of them, which is something I guess? Still trying to cut back some although I guess my resolution not to smoke on the weekends was kind of a failure considering I thought I wasn't going to have Wyatt over on the weekends but now he's started coming over when Fritzy's home, too.

That's all the news for now. Hope everyone had a good weekend. Keep Sparking!