Why Do I Set Myself Up To Fail?

Looks like I kept that whole "blog every day" goal for a whopping two days.

Why do I do that? I don't like letting you guys down, and I also hate being a person who doesn't stick to my goals.

I think when I did this before it was a lot easier because I was working, and spent 6-8 hours of my day behind a computer, so I always had time to pop in and update.

That's another excuse but instead of saying I'm going to update daily, I'm just going to say I'll try and update as often as a can.

I'm actually doing really well! Today, the scale read 266.6 which is 23.4 pounds down about 9 weeks. Slow and steady!

The most exciting new thing I'm doing is I decided to start training at an Olympic Weightlifting gym here in Dayton. And my coach is actually former Olympian who went to the 2012 games! How cool is that?

I decided I wanted to do it after asking J.D. if he thought I could. He straight up said no. Now, he said, it's not that I'm not capable, but I don't have the dedication. And he's right, the last three or four times I've started "lifting" I gave up like a week or two in. And that's because I was trying to teach myself by watching YouTube videos and reading books.

It is a whole different ballgame when you have one-on-one personal training working on your form and technique. So now on MWF when I drop Henry off at preschool, I head to the gym and lift. And then after lifting, if I have it left in me, I go to a different gym and do some cardio.

This whole time, I've also been sticking with Weight Watchers. I think the reason I prefer that now to CICO (Calorie In Calorie Out) which was what I did with SparkPeople the first time is that with WW, I don't have to count fruits or veggies, or eggs or chicken breast. So I go for those things first because it's easier. When I was counting calories I still had to care that a banana was 100 calories or that each egg was "costing" me 70 calories.

However, what I do miss is interacting with all of you. So I think my goal will be to weekly, make the rounds of SP looking at your blogs and trying to comment for that human interaction. I always appreciate all your comments, goodies, and messages because it reminds me that I am SO NOT ALONE in this daily, lifelong struggle.


Also, Henry turned two and a half a few days ago, which I think deserves a photo. 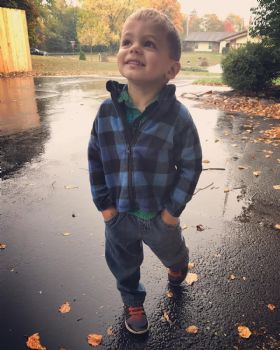 So here's me, not making any promises, other than to keep trying every day no matter when, why or how I mess up.