Hike with a weighted backpack

This past Saturday I decided it was a good idea to support my son. He is currently at Boot camp in San Diego preparing to become a Marine. Saturday they were doing a 8 mile hike with 45 pounds on their backs. So this mama wanted to show my son I support him fully!

We went out to Afton State Park which is FULL of hills. We only went around a 5k distance but that was plenty. I only had 25 pounds on my back but it wasn't dispersed. The weight was just sitting at the bottom on my backpack. 25 pounds adds a ton when you aren't used to it. 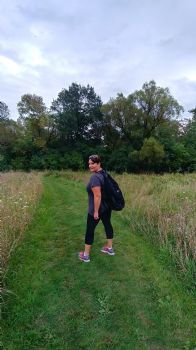 We had a few obstacles to get through with some fallen trees. My hubby even was stung. (He didn't join me carrying a weighted backpack.) But there was a lot of reflecting. Reflecting on everything our son has been going through at boot camp. We are so very proud of him!

After the hike I held that pack up over my head (which was actually pretty hard... LOL). And then I wrote a letter to my son showing pictures of what I did. 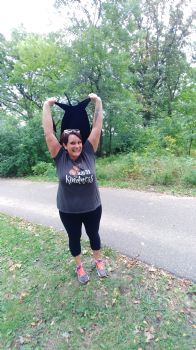 I already have plans to do this again next week. Another mom and I are going to carry weighted backpacks for our sons as they are in the Crucible which is their last task before coming a Marine.