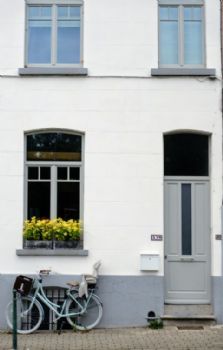 In July, I have increased further a bit the number of monthly rides, now 117 rides in one month. The previous was 113 in June.

I think there was only two exceptions when I didn't commute by bike (it was walking), all the other times, I went by bicycle.

On average, 3.77 rides per day, which is minimum 2, maximum 6 commuting rides a day.

I also clocked in 288 km (179 miles) with these rides, which is 2.46 km (1.5 mile) on average per ride. This is consistent with the statistics that I see that the majority of city trips are below 5 km and are feasible by bicycle easily.

Each month I compete with myself to beat my record, and it is becoming increasingly difficult. If I travel for a few days, sick, it is almost impossible to beat it. Also, I can see that the extra day in months of 31 days counts - a possibility to add another 4-6 rides to end.

I wish more people would go by bike for these short trips.

I know too many colleagues and friends who go by car for the same distance.

In the house where I live, everybody goes by car except us so only 1 from the 30 households. I know a few other people who goes occasionally by bike, or also by public transport.

It seems like a stupid circle. Because many people go by car, the city is congested from the cars, and public transport cannot be very good.

There is no place for cycling lanes as parking cars take up all the space left.

And as public transport is not very fast, and there are only a few cycling lanes, people rather go by car.

The irony is that in Brussels only a minority of people go by car. But this is still too much and they create congestion, pollution, noise, and occupy the space for everybody.

WHY DO YOU CHOOSE THE CAR?

On Wednesday, I had a meeting with someone who came over from Mechelen, which is only 20 km away.

Mechelen has excellent train connection to my workplace, it is on a major train line, and it takes 15 minutes.

He came by car: participate in the congestion of the city centre, circling and taking up a space to park the car.

I asked why and his reasoning was that afterwards he went to Leuven.

Leuven is a medium size city here and it is 25 km away, and has equally a great train connection, every 15-20 minutes there is a direct train, which takes 20 minutes.

The train station from our place was only 5 min walking, or there is a Metro nearby. And I suggested him to come by train.

I was thinking, why did he decide to come by car?

Thursday lunchtime we discussed with a few colleagues about mobility in the city.

One of my friends said that he believed that we cannot expect individuals to make a more environment friendly choice.

Most people will always optimise for their own personal benefit.

And going by car is way too cheap, compared to real environmental and societal costs.

As long as it is cheaper than all other options, people will go by car, instead of any other option.

On the top picture is the bike of a friend of mine.

She said there were some Japanese tourists passing by, and they posed to make a nice photo.

I just discovered how nice this composition is, so I took a few pictures myself to experiment.

I think this was the best composition.

When there are alternatives, when do you choose to go by train or by car?