The Thessalonikian Dilemma - thoughts and pictures 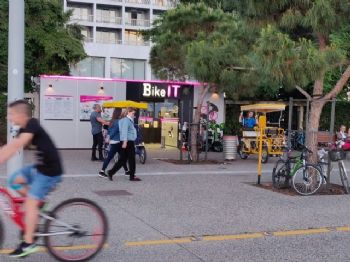 I have spent a week in Thessaloniki, Greece, a few days ago.
Right at the beginning, I looked up a few bike rental places.
Surprisingly, even the Hotel where we stayed, had rental bikes.

So I used most of my free time to pedal around to more distant and beautiful places, and do some cultural digging on two wheels. 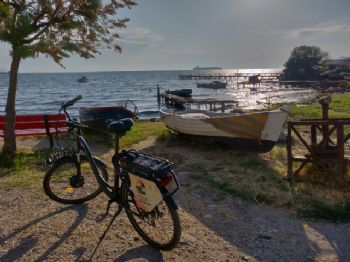 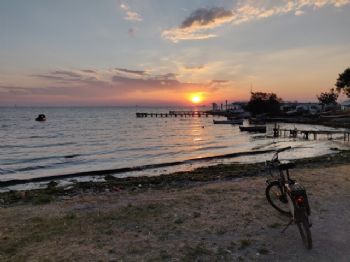 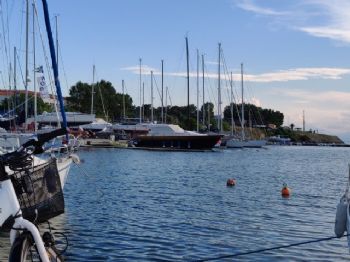 Otherwise Thessaloniki is a big, vibrant and packed city with 1 million inhabitants.

And lots of ancient heritage everywhere from all sorts of periods of human history.

Something that is "around a corner" in this city was a chapter in my history book in high school.

If you want to be an archaeologist, historian, this is the place to be. I bought some local choco in a candy shop that was built on top of some Roman ruins, then I ate it sitting on some Byzantine walls. 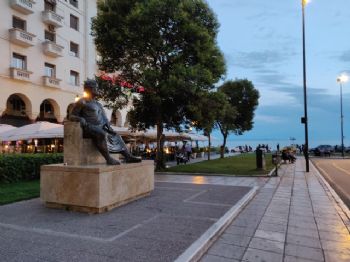 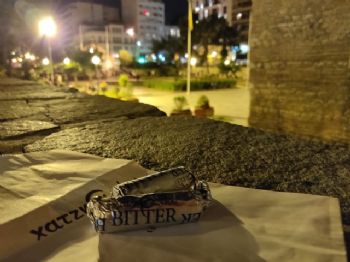 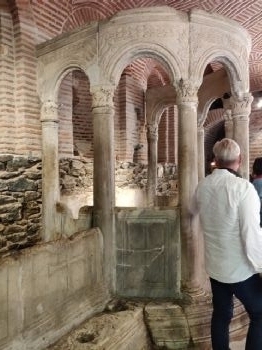 On the other side, I never thought about it, but actually it makes building new houses, Metro, telecommunication lines, water canals, or whatever, an ongoing never ending DILEMMA in Thessalonik.

Shall we upgrade the city for today and make it liveable for the here and now?

This means that as you press the button on the excavator, it drills brutally into ancient rocks, metal works, sculptures.
Maybe it is something super valuable, never seen before. A missing puzzle that fills the gap in our understanding of history. Or simply it is just a piece of a beautiful masterpiece that someone created investing his time, money, patience 2000 years ago. A person like me was standing here, living his/her life, and built this water canal, kitchen, stadium, bath or church.
In other places in the World, when you dig, water, oil comes up. Here, the basis for a new museum.
And the deeper you dig, the more the stuff comes up.
Hard to do without any resentment.

Or shall we preserve the archaeological sites, expose the history, and make studies?

This means no metro, no canal, no new houses, just big started-and-stopped construction sites everywhere.
I mean everywhere, in the middle of the busiest road, in-between two houses, in your garden.
The construction budget is frozen, everybody is waiting for the scientists to do their work, and decide what to do.
First this goes on for a year, then a couple of more years, then for a decade, then you discover that your children grew up and and it is still an unfinished.
Can we ever build anything?
OMG, we don't need an ancient roman stadium for every corner of the city.

And I don't know if I have ever seen so many shoe shops in one place in my life. 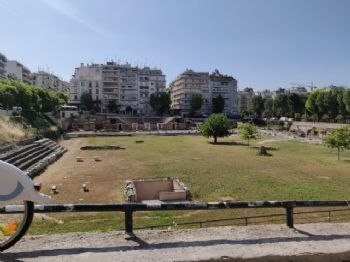 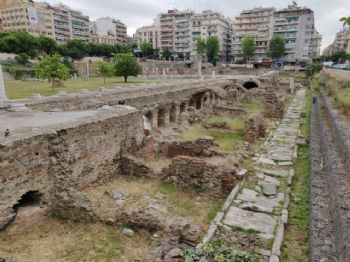 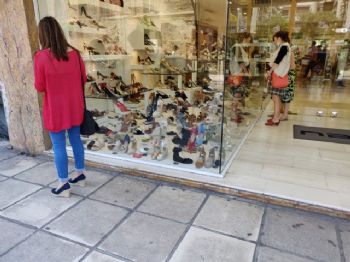 The streets are usually narrow, and often houses built next to each other on purpose, to give shadow in the strong summer sun. The coast is beautiful, empty during the day, only a few tourists scrolling around in the heat, then in the evening it buzzes from energy. 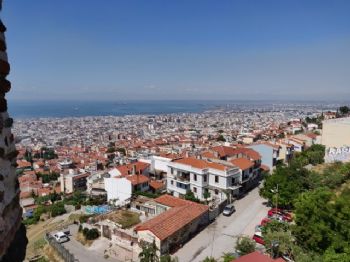 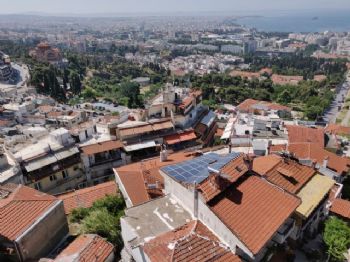 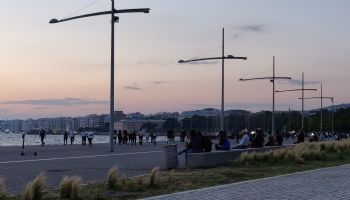 I loved the atmosphere of the dinners. The hospitality was amazing anywhere we went, we always got a wonderful welcome, lots of care, and somehow more food than we actually paid for.

One of my favourite places was this bazaar, where a lot of restaurants were on top of each other in an inner courtyard. 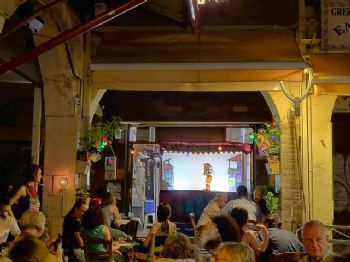 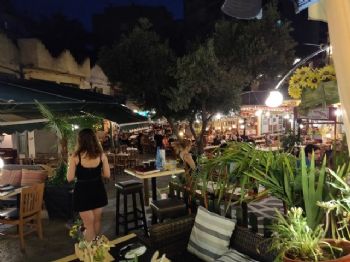 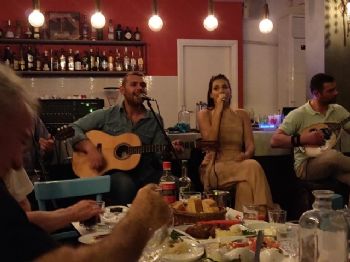 There was only one aspect of this city that I didn't like.

It is also so full of cars so much so that people can't even move around. Parallel parking everywhere, two, even three lines of cars. Often people park in the middle of an intersection.

As I walked around, about 80-90% of an average street is occupied by parking places and the road in the middle.
There is only a narrow strip on the side for living.
Also, when I stepped out from the hotel, all what was there were cars.
Crazy.
Why are we doing this everywhere in the World?!

I found a couple of bike lanes, mostly abandoned and not maintained.

I guess they were designed at some point of time when an enthusiastic person included it in the planes.

However, I always had to cross in funny zig-zag lines in intersections, switch from one side to the other. 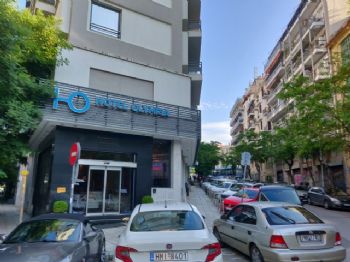 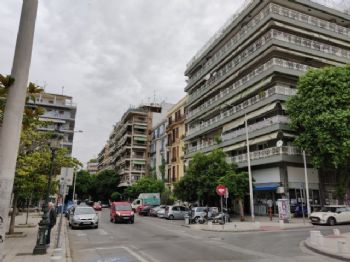 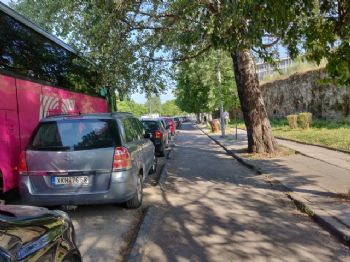 As I continued, I discovered at certain parts people just used it as an extra car parking space.

So much so, that it does look like a car parking space, and not as a bi-directional bike lane.

Then, after an intersection, people realise it is indeed a bike lane, and leave it free.
Eeee, or only use it for small stops.
Because, when you drive a car, you want to leave the car lanes free, and of course you stop on the bike lane.
Can you tell on these three pictures that it is actually a bike lane on the side, and not a parking lane? According to the signs and the colour of the asphalt, it is a bike lane. 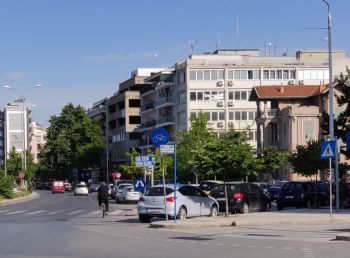 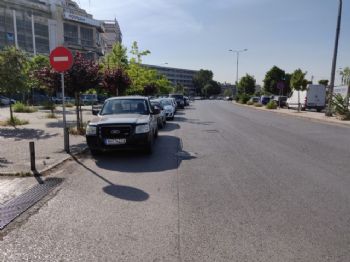 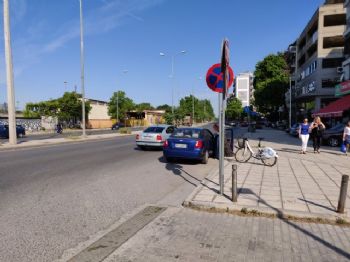 As for biking, I found Thessaloniki is not that bad. All the pedestrian crossing and intersections have a lowered elevation. This is great for strollers, wheelchairs, and of course bikes. Even Sweden doesn't have this barrier free feature so systematically. "Of course" the rest of the infrastructure had terrible accessibility, as almost every city I go to in the World. 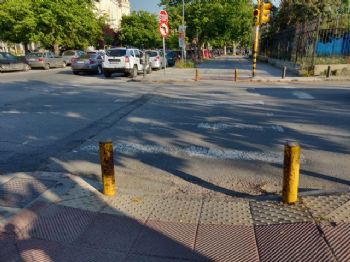 I found a lot of small low traffic streets, where I could pass by bike easily. I re-discovered this many times - when I switch to bike from car driving, I use different streets. Usually, when people drive, cannot imagine to drive in that awful car traffic. And, I would not drive there either.
I ride my bike elsewhere.

So, getting around on the streets by bike was ok, and in fact the only thing that bothered me when I biked in Thessaloniki is the impatience from others.

EVERYTIME someone drove behind me, s/he pressed the honk IMMEDIATELY, whirring the motor, and coming a few inches close to my rear tyre. It sounded like:

Then I pull to the side, they take over impatiently with a sigh and some angry looks.

Then a few meters later they suddenly stop, open the door, and start discussing with someone on the pavement.

Then I just drop a smile to them, with a "Kalimera!" (Good morning in Greek), and find my way around them as nothing happened.

This happened so many times that I cannot count. Especially on those one way streets where there was no room to take over because of parallel parking on both sides.
What an irony of life.

When I visit a new place, I always hear the voice inside me that asks "Would you live here?".

For Thessaloniki, I think I would: I loved the connection with the people, the frills-barrier-free communication, the ability to smile in even in the toughest situations.
Also, the abundance of places to have a great ice cream, something that I miss almost everywhere in the World.

And at the same time, probably I would look up and become a member in the local cycling association on the first week, or start one if there isn't any.

To end, here's the funniest mimicry I have ever seen, and a bonus for high-heel lovers. 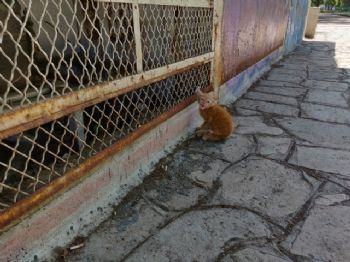 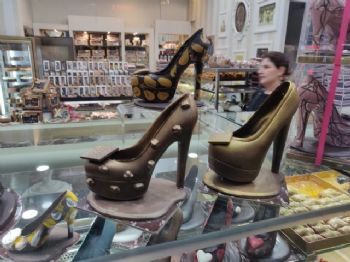 Have you been in Greece before, if yes where?

Here's the UN guide for accessibility, if you ever build a new thing: