My Return to Sparkpeople

I have just returned to one of my favorite social media sites. Yes I am calling Sparkpeople a social media. It's where I felt connected in a world full of strangers online. When I logged back in this week, Sparkpeople had said that it had been about 16 months since I had logged in before.

So this week I have been going around to see what's new here. According to Sparkpeople, I started on this site in August 2006. 12.5 years and I actually weigh more now then I did then. My first blog wasn't until 2008. I was skimming through some of my old past blogs and found one in May 2009 (10 years ago) that I weighed 155#. I have forgotten what that even felt like, but would like to see that number again.

The scale was definitely going in the wrong direction!  It must have been a stressful year. My weight has gone up & down like a yo-yo every few months every year since I have been on Sparkpeople. Today in May 2019, I weigh 200#.

I love reading the few comments on my past blogs, and have checked out the sparkpages of people who commented before. It seems like quite a lot of people have left sparkpeople. I have also checked out a few names I recognized on my friend list and it seems like lots of them also stopped using sparkpeople. Oh well, I move around often so I should be used to starting over by myself by now.

So while going around to see what's new here, I found some challenges. For now I have decided to join the week-long water challenge. Later I might try a different challenge. Remembering to log into the challenges to post and keep track of what I did for each day will actually be a challenge. I am usually such a scatter-brain and a queen of procrastination. 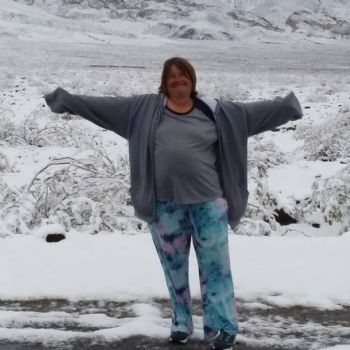 That is me...taken this year, during a rare (very rare) stormy day in Death Valley National Park.

I had come up with the name "canyon_gal" because I used to live and work at the Grand Canyon in AZ. Thinking that I should probably change it to "Desert Girl" now that I returned to Death Valley National Park last June.
Share This Post With Others
Report Inappropriate Blog
Member Comments About This Blog Post