A Little Bit More about Retraining the Brain

I just reread what I wrote last year about a lesson from the Beck Diet about recognizing cravings and what to do when you experience them. It is so interesting to see where I was then and now. I remember that the hunger scale was a huge revelation for me and that most of what I thought was hunger was just cravings or urges. I felt like I had conquered my craving behavior by using distractions and consistently resisting the food as I craved it. And for quite awhile that was enough to stop me from eating in the old style of grab, eat, go. But as is often with new ideas - it stuck for awhile and then at some point I let go and gave up.

Right now I am studying how the brain works when we are trying to make changes. So if we use the Beck method everything is perfect. We have to stop when we have an urge, pause, and create a new behavior that will create a positive ending by stopping our compulsive eating. This is exactly what the brain requires. The only part that I was missing was that I didn't realize how important it is to understand why the brain would continue urging us to choose the old way over the new learning.
It takes a long time for the brain to create new pathways - like reprogramming a computer. The thing is the brain keeps in its memory the old way of doing things before we make our changes. And it will continually try to take us back to that behavior. So if you waiver at all in your new behavior, it takes a lot longer for it to accept that you are in charge and you are choosing the new behavior. It is like you have to constantly and consistently over ride the brain's natural pathway to take the old behavior. This lasts until the new behavior becomes ingrained. However, there is a bit of another problem. Let's say that you are always triggered to overeat when you smell pumpkin pie. And it has been a year since you were around a pumpkin pie. You had been going along, do awesome on your eating plan, no problem, then wham, pumpkin pie enters your nostrils. Suddenly you feel the urge that you have to have pumpkin pie. In fact it happens so fast that you don't even realize it is that old behavior that you thought you had conquered a year ago. That is when you have to be so conscious of what is happening and realize that the brain has once again taken you along that road of the old behavior.. And this doesn't have to be a smell. That is why it is so subliminal. It could be that you always got taffy when you went to the ocean, and you hadn't been to the ocean in 10 years. And all of a sudden on a vacation to the ocean you find yourself craving taffy.

Anyway, for me this was just another piece to puzzle of why I could do so well for quite awhile and then all of a sudden choose the old behavior again.

Last night I had this happen. Right before bed I thought to myself, Oh, I am hungry. Then I said to myself, no, that is only a thought, you do not have to feed every thought you have about food. Then I started off to bed, and I thought, OH, my goodness, wouldn't it be nice to have a piece of that new cheese you just bought? Then I had to laugh a little, I recognized that my brain had started the bargaining process. I actually said to myself, OK, brain, I know what you are trying to do here and it isn't going to work. I am in charge now.

I can't say that I still didn't want the cheese, but I knew it was my brain just firing off some chemicals to take me down the old road to satisfy cravings. It really helped me to know that I was strengthening my resistance by choosing a new response. I mean, we are people and we were given brains to be able to use, and I want to be in control of the food that I put in my mouth. Now that I know better, I can choose and do better. 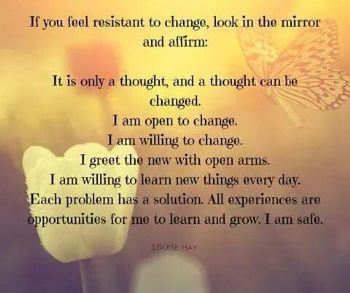