The weather here has been weird to say the least, last year we had snow, rain, some big storms and the hottest summer on record, this was followed by a mild autumn and winter and now, according to the weathermen, we seem to be following the same path with snow forecast and cold winds from the arctic...so far it's still mild and though it's quite windy and turning colder there's been no frost or rain.

The poor plants don't seem to know what to do and are coming into bloom early.
The pristine white snowdrops were blooming Christmas week, they're an early flower but even that was three weeks earlier than last year, and the primulas are already opening flowers too. The 'buff beauty' on the rose arch has roses again. They smell gorgeous, the blooms aren't lasting long but it looks so pretty with the dying flowers next to the new ones.

Already the birds are pairing up.
My collard doves, Lovey and Nova, are busy gathering twigs.
Lovey brings one and passes it to Nova, she examines it and then either rejects it by dropping it on the ground or flies with it to the cherry tree where she has already built up a small platform of them.
He's nothing if not sagacious, as he goes back to the rejected ones, retrieves them and offers them again, she then accepts most of them...lol...they're so amusing to watch.

The male goldfinches, greenfinches and chaffinches are already sporting their courting plumage and bickering over females so if the snow comes they'll be in for a shock!

One of the groups I belong to is a kneelers group, we make tapestry cushions and kneelers for All Saints Church in our village.
My DH is an upholsterer so backs them and puts the cushions and kneelers together for us when they're finished.
The cushions have to use the five colours of the aisle carpet, red, gold, cream, blue, green and we can also use black and white. There are three shades of each colour plus the white and black, loads of designs to choose from or we can make our own up if we want to.

The kneelers are commissioned by people who want to remember a loved one who has passed and these are always designed by us to the accordance of the relative using whatever colour or design they require.

I usually only sew my cushions or kneelers at the group as I have plenty of other projects on the go but as I missed a couple of meetings before Christmas, two after New Year and last weeks was cancelled due to having new lighting installed in the Village Hall I haven't done much since well before Christmas and as I've a meeting tomorrow I've been trying to get on with a bit at home.
I'm on with a cushion in shades of red and white at the moment.
We don't actually get a lot of work done at the group, we spend too much time talking, laughing and doing the work wrong...lol...there's a lot of 'reverse stitching' goes on...it's our term for pulling work out when you've made a mistake!

When I sew I like to sit in the conservatory, it's nice and warm next to the radiator and I have a lovely view of the garden, the pond and the bird feeders.
I was sat there the other day when I heard a loud thud, I didn't actually see anything but on investigation found a goldfinch had flown into the window and knocked itself senseless.
DH picked it up and it seemed lifeless but then it gave a twitch and began shaking, eventually it sat up but was very groggy. DH held it for a while, he said it's little heart was going ten to the dozen, and then carefully placed it on the garden bench where it sat for around ten minutes then hopped down onto a flower pot, then up onto the fence where it looked around as if to say thank you and flew off.
I hope it found it's friends, it had arrived with a big flock of about thirty which regularly visit the garden and they all left without him.

We have an abundance of birds visiting the garden, just lately we've had three rather unusual visitors too.

A fieldfare came in with the goldfinches, it's unusual for them to be seen in gardens as they're field birds and migrate in to this country from Russia, you can see great swathes of them along hedgerows gorging on the berries but then again, there aren't many berries this year so maybe he's adapted.
It's quite a big bird, thrush sized as it's related to them, and our resident blackbird took a dislike to him and chased him away when ever he appeared, as a consequence it hasn't been since.

About ten days ago I looked out of the bedroom window to see a hen pheasant busily pecking away beneath the feeders where the finches drop lots of bits of sunflower hearts. She stayed most of the day and then returned again the next day wandering around the garden like she owned it. Pheasants aren't garden birds, they prefer farm land, but she's visited again twice since and last time brought another female friend with her.

Then a few days ago a cock pheasant turned up.
I was walking down the front path to go to visit my neighbour who's just had a hip operation and had to duck as it flew over my head literally missing me by about six inches, luckily I heard it coming as their wings make a whirring sound as they fly.
When I got back it had flown over the gate and was in the garden where it stayed most of the day, it wasn't afraid of me and just retreated further down the bottom of the garden if I went outside.
Next day it perched on the shed roof, claiming it's territory by craiking loudly, it stayed all day again and has since visited very day. It pokes about under the feeders and struts around the pond. One day it even settled down on the bench and went to sleep...I think he's here to stay which might be a problem if it brings a mate, they can get very aggressive at breeding time and have been known to attack anyone who gets too close! 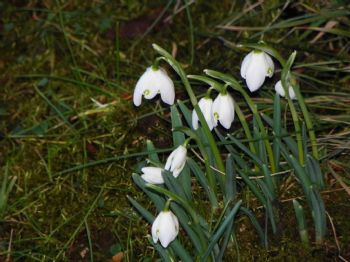 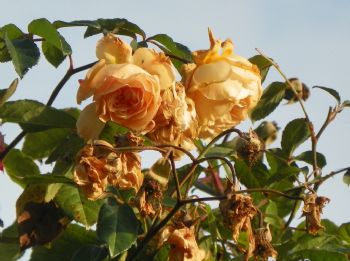 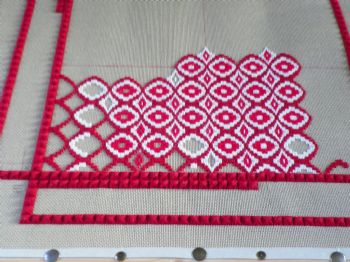 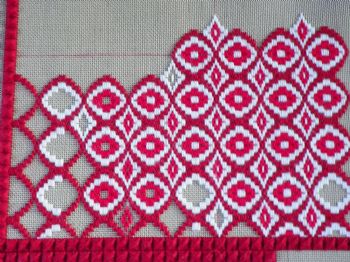 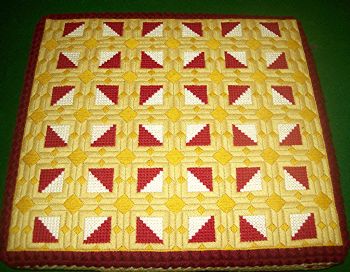 Gold...one of my finished cushions. 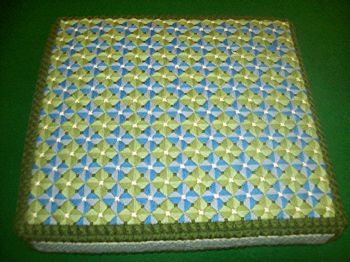 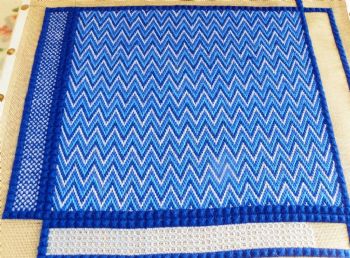 Blue...yet another of my cushions. 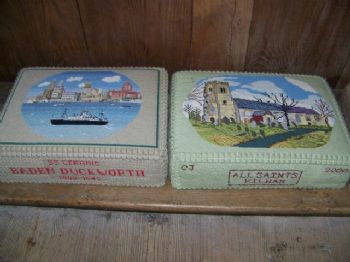 A couple of finished kneelers. 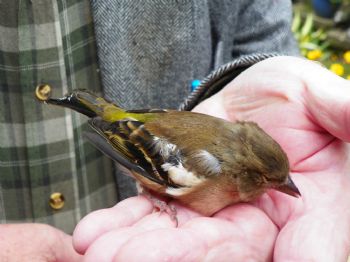 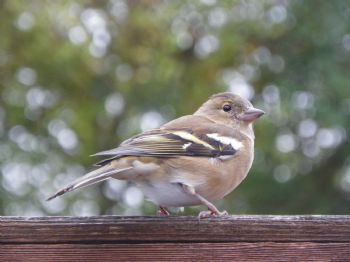 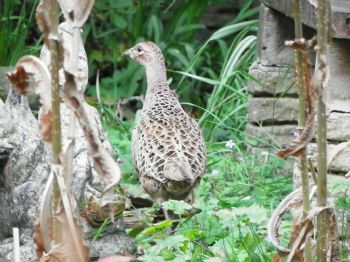 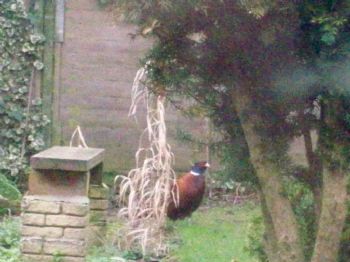 Mr. Pheasant by the bench he went to sleep on! 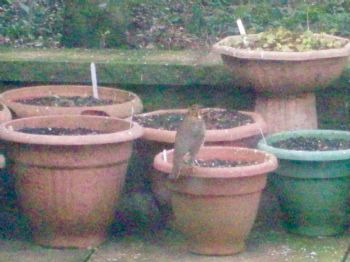 Rather blurry but it is a fieldfare. 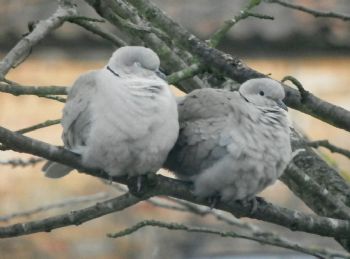