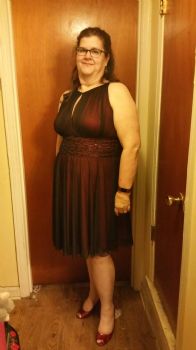 Today is day 200 on this leg of my Sparkpeople journey. In the past 200 days I have lost (unofficially) 25 pounds, I have gone from a completely sedentary lifestyle to one averaging at least 3500 steps and 4 floors of stairs a day. I have become the kind of person that doesn't circle the lot looking for the nearest parking spot. I am someone who has persevered through a plateau that coincided with my worst months for seasonal depression without giving up. I busted through that plateau last week only to face a week this week that included the company Christmas party, a shop meeting with a catered lunch and an office potluck all in the last three days and by recording every bite I took I did so with only a 0.2 uptick on the scale.

I have learned a lot about myself and my body these last 200 days. I have learned that while i don't drop pounds as quickly as I did when I was younger (and heavier to start with let's be honest) If I trust the process and work the program I still move toward my goal. I won't see ONEderland by the end of the year as I thought/hoped when I started this leg of my journey but I'm quite certain that I will see it and I will achieve whatever goal I decide on beyond that was well. I believe in the power of me. I believe in the power of hope. I believe in the value of health.

Two years ago this month I ended up in the emergency room with chest pains pretty terrified I was having a heart attack. We were underinsured and broke. I was released December 23rd having been diagnosed with complications of untreated diabetes and prescribed an insulin regimen I expected to be on for the rest of my life. When I went to Walmart to fill my prescriptions the fee was more than we had in the bank at the time...my hospitalist, a young doctor named Lindsey, asked me to return to the hospital where he went to the lobby atm and gave me the money, from his personal account not some aid program, to pay for my prescriptions. I cried as he wished me Merry Christmas. All he asked in return was that I take better care of me and he pointed me to resources for doctors and medications so I could do that. He saved my life that night. I will probably always think of him at this time of year.

This journey is largely because of him and people like him who crossed my path and believed in me and cared about me when I wasn't in a place to care about myself. One of my goals is to be able to walk back into that hospital one day and let him see the results of what he started...I am now 3 months off insulin and about to leave the house for my quarterly A1c that I have no reason to expect to be anything but good...and if he'll take it to give him an equal amount of money to do the same for another patient someday.