Good morning, everyone! Let me tell you about this little thing I did this weekend... I kinda hate myself for it. 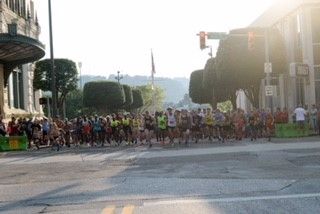 You see all those crazy people right there? I'm in that bunch. 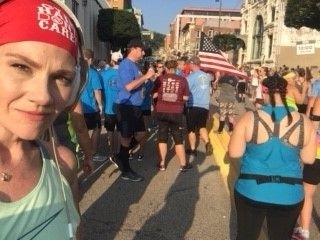 So, I know what you're thinking... Esther, you ran a 5k!?! That's great! Amazing! Why do you hate yourself for it? Let's take you back in time to 2010. Debbie Green 5k was the FIRST 5k I ever did on this never-ending saga of me wanting to run. I walked it. I met a great Sparkfriend for the first time. I got the worst blister of my life in the middle of my foot. I finished at 57:21 or something. I wrote a blog about it... you can go back and read it if you want. Here's an image of the 2010 me about to walk 3.1 miles. 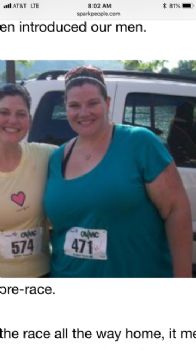 I told myself that I should just treat it as a training run. An easy 3 miles. Take my time. Go easy. I knew the darn course started on a hill, leveled off, and then went up again, but I honestly thought if I could get over that, I should be golden. (I also had hoped like hell they had changed the course direction, but no such luck!) Well, let me tell you... not running in over a week AND not hill training meant I was just about dead by the time the second part of that hill came. I was doing my best to keep pace with my group. And for a long time I was doing pretty darn well. If that race had been just a mile and a half long I would have been fine. But what I apparently forgot is that once you downhill and run a straight stretch, you go up again. And again. It's like the journey of never-ending hills in this town! I was cursing the town, trying to catch my breath, walking as fast as possible until my body cooled enough to try to run again, and making myself push through every single downhill and straight stretch I could stomach. Did I mention it was around 90 degrees outside?!

So I fell behind around a mile and a half to two miles. My watch pacing was WAY off. I passed the first mile marker and my watch thought I'd been about .6 miles. I wanted to give up more than I EVER have in a race. (I'm also dealing with some highly stressful and emotional stuff at home so while I wanted to run away from it all in this race and use it to fuel me, I just felt like NOTHING was going right - including my running.) So, yes, I finished... I wanted to end around 35 minutes. I ended at 41:49 or something (you can see better in the pic). 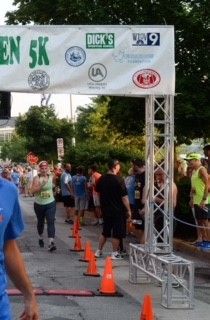 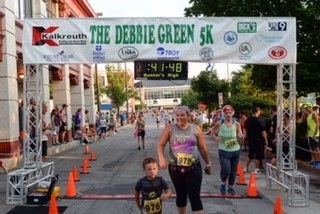 God, I wish I was as happy as that woman who ran the last bit with her son to the finish! I wasn't. I hurt. I cried. I had finished, but I felt beat down and useless. This race stole my hope and my air right out of me. I was pouring water down me, trying to cool down, trying to find any familiar face and failing, and just wanting to sit down and cry. So I did. I cried. I saw people looking at me, asking one another what was wrong...but I honestly did not care. I needed to cry. I took a few moments to sob for what I thought were my failures as a runner, as a person, as a human being on this planet. I sobbed to apologize to the me in 2010, to the me who registered for the race all hopeful, to the me who started that race just 45 minutes before thinking MAYBE it was still possible...all of whom I felt I failed. And when a few moments passed, I gathered myself up, wiped my face, poured water down my throat and my back, and walked myself to the car for the long drive home. I didn't get my medal out of my bag (don't get me started on races that hand them out before you start the race - it made me want to just quit...it felt like I didn't accomplish anything!). I just drove home in mostly silence without stretching or properly refueling or doing any of the post-run things I knew I was supposed to do. I didn't care anymore. I might be giving up on running. I'm not a good runner. I'll never be good at it. It isn't for me.

Two hours later, still dealing with stress, drama and disappointment all around me, I arrived home, showered, put on my PJs and climbed into bed without really saying anything to anyone about how it went. I felt completely alone on my island of self-pity. No one could reach me there. Goodnight.

The next morning, I woke up and still felt like hell. I still wondered why I was even trying to do this stupid thing called running. My loose skin isn't going anywhere. The flapping sound as I run I can hear over my headphones, so who knows what other people around me are listening to as I run next to them! Plus, I wasn't much better than I was in 2010...or was I? 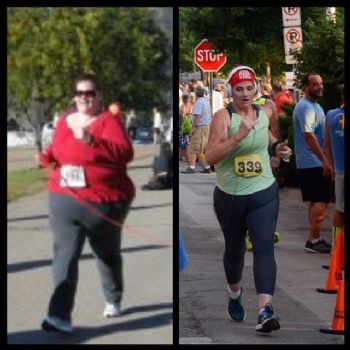 I don't have a good mid-walk race pic on my computer or phone anywhere from that race in 2010, but I do have this one from another 5k I did like a month or so later, the first time I tried to "run" in a race. And I compared the two. Okay, I THINK I see it. I still see the problem areas, but COME ON...I HAVE to admit that there's some body improvements here. More than that - look at that running form! There's an actual foot off the ground in this 2012 pic. I am ACTUALLY running. And...I shaved more than 10 minutes off my pace for the same course at the same time of year - the best way to compare pacing/finish times for races for improvement.

And it helped that the scale showed my lowest ever recorded weight. And those pictures. And just that stupid little something inside of me that just won't quit no matter friggin' what I go through! (What IS that thing?! Its a little masochistic at times!) So I sat down, shut my "quit" talk mouth, reformulated my goals for the next race (10k in 40 days), put together a food plan for the week, bought healthy groceries, and packed a gym bag for the next day.

So I guess I'm doing this again. (Part of me is still crying WHYYYYYYY!?)

And, one day.... one day I will run this entire HELL course. Like, seriously, I hate this course more than any I've ever run! There's a hill in my 10k and I'm no longer afraid of it because it's one long hill and then a lot of little stuff after that...unless I'm forgetting something about that one! (OH NO!) But one day I will run this course, and I will beat the 35 minute goal, and I will cross the line with a friend or family member standing there with my medal, that they already gave me an hour before race time, who is cheering my name and telling me WOOHOO because they know what it means to me. And there will probably be tears that day too...but the other kind, the joyous kind... until that day....