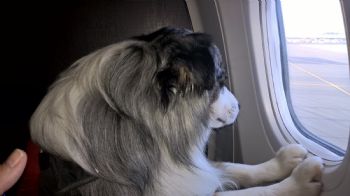 Apollo was the most wonderful traveler. It was his first time in a plane. He slept all the way home even on take off and landing. Then we had to jump to a connecting flight. On that fight his bladder was full, so he was fidgety. After we landed and we were taxing on the runway he stood up to see where we were. I told him we were home. The folks at Southwestern were great. They took us by wheelchair to the dog bathroom first thing. Apollo didn't like going inside. His bladder was so full, he let a little bit out. It wasn't until we were outside that he let it empty. SW also wheeled us down to my husband, got our bag for us and took us outside.

The flight was insane. We started in Orlando, Fl. The flight kept being delayed to all the storms. We sat in the airport over an hour and 40 minutes waiting. Then we got on the plane. All of a sudden there was another delay. Then we got on the taxiway when we had to weight another 40 minutes. By the time I landed in SD I couldn't move my legs anymore. They transported me in a Wheelchair to the next plane. They held the plane for me thank goodness or I would of had to wait until 11pm to fly. A hour and a half flight and we were in Sac. Oh it feels so good to be home.

The young man that sat next to me was sick, so I caught his bug. I have had a fever for 24 hours.

Mom was settled in home when I left. Dad was in her care. The whole trip was extremely stressful. Mom had an attitude towards me. I don't know if she will plan ahead for her next hospitalization. If not dad will be placed in a nursing home by adult protective services. I did all I could for them 24/7. Dad is lots of work with dementia. He was always hungry. He would forget that he ate a few minutes before. He had accidents on the carpet. Would walk in it leave a trail of brown on the carpet and in the bathroom. He became defiant at times saying No to a shower when he needed a shower.

Dad is totally different around Mom. I am a stranger. He doesn't remember me. I left the next day. I could feel the MS acting up. I knew I needed to get home. I needed to heal and work on myself. I did all I could for them.

Mom and Dad eat the crappy SAD diet. As a result they have health issues. I tried to educate mom, but she was not receptive. I left knowing I did all I could for them. I couldn't change mom's mind to have a plan. I question her judgments. She has made large payments to people. She said Apollo was a bully because he was taller than her dog. He stood over her dog licking it. Her dog would bite him. He wanted to be friends. Somehow everything is twisted around in her eyes. What she believes is what she believes and nothing will change her mind. Anna my cousin is incharge of her finances and decisions. Ana would of had dad be placed with protective services. I told mom, but she didn't believe me. It is why I flew across to Florida to help out. Ana was paid money and put into her will to take care of Dad. I have to walk away from whatever happens. It is my mom's choice. I thought she would recognize that I went to help out because Ana wouldn't. Ana isn't doing what she said she would do to help mom. It is moms choice and if she can't see the light or be open the help, that I am walking away. I must work on my own heath.