Literally NOTHING to update on my weight loss journey... here is something I posted on Instagram a few days ago... 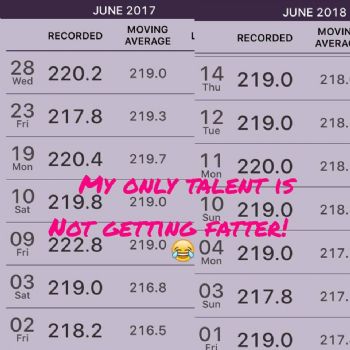 Basically I keep joking my only talent is not getting fatter. Here is the recap again... highest weight 272, restarted spark (had been on it since 2009 lost some weight and gained it back) at 262 pounds in 2012. Got down to an amazing 184 within about 2-3 years. Stayed between 190-199 for 2 years before starting to slowly regain. I got as high as 237 pounds before I said "OMG what are you doing?! You are about to gain ALL YOUR WEIGHT BACK!" I managed to FINALLY stop the regaining after regaining over half of my weight and I was able to get back down as low as 210. But I have been teetering between 210-220 and more recently the 215-220 mark for a long time. I was as shocked as you when I realized what is seen in the pic above, I weigh the same as I did last June.

Now I want you to know I am not complaining, but I am completely torn and here is why... I will start with the negative but end with the positive. ;) The negative is the absolute obvious. 1 entire year weighing the same exact think. No progress towards Onederland and no progress towards additional weight loss. But let me tell you about this past year. Last June I traveled to Atlanta ALONE from California and had the vacation of a life time. 3 Luke Bryan concerts, I freakin met Luke Bryan for the 1st time, a trip to a restaurant I had been wanting to go to and I met a dolphin at their amazing aquarium. I have done so many things in this past year and I have been living my life to the fullest since 2012 when I started losing weight.

On top of that I have lived my life all while not gaining a pound. Maintaining is an amazing accomplishment and had I just managed to maintain when I was at 184 I would be even happier. (Okay that was a little negative but you know what I mean LOL!!) The fact that I have not been diligently tracking for the majority of that year and have been living my life is a huge accomplishment to me. Many struggle to maintain any loss and I have kept off a 50+ pound loss 6 years after starting. That is a win in my book.

Not to mention I have really gotten a hold on my binge eating. I will not say that I don't ever binge but I was in a binge restrict binge restrict cycle for quite some time. That was how my weight ended up being maintained. In the last 2ish months I have hardly binged, I have eaten what I have wanted when I wanted and managed to eat at maintenance levels without trying. That is a much healthier habit than the horrible cycle I was in and for that I'm grateful.

On the life front I was in an accident on May 19th... it totaled my car. I was not at fault, someone turned left in front of me. They accepted full responsibility. Still dealing with all of that. Luckily my car was a 2006 and 170k miles so I knew the end was near but this isn't how I expected it to happen. I had been saving for a car and so that was a blessing because when this happens and you are forced to get a car out of the blue, you are never prepared. I love my new car it's a 2018 Nissan Rogue and while I miss my old car and am mourning the loss I do really love my new car.

Of course I'm still intently following (it sounds better than stalking) Luke Bryan! I am seeing him in Lake Tahoe & Dodger Stadium in July. Vegas for the I heart radio festival (along with Carrie Underwood, Kelly Clarkson, & Justin Timberlake) in September and I am going to Portland & Seattle to see Luke and sight see around Seattle in October. In addition to that some vegas trips to see Grandma are of course important and trips to Disneyland and the Zoo as well. I really am just enjoying life.

Do I absolutely NEED to get back under 200? No I don't.... would I love to get back under 200? Of course! So I am hoping to slowly inch my towards Onederland but I know that doing anything drastic will send me into that binge/restrict cycle and I don't want to. I don't know if you've heard of Binge Eating Disorder and I know you can't self diagnose, but the symptoms and the things you have to have 3 of to have that eating disorder, I have more than just the 3. It didn't start til I started dieting in 2012 so at this point it might sound like a cop out, but for me getting a hold on the binge eating is more important to me in the moment than losing the weight. Hopefully I can get to where the binge eating is very few and far between and hopefully that alone will allow me to lose a few pounds. *fingers crossed*