I've been on this WFPB journey for since October 2016.
I'd like to share my experiences here in the hope of helping others.
I'll begin by saying that I've had thyroid disease since 2007.
And that I've always been a bit of a "health nut" eating well and exercising, despite whatever other craziness was going on in my life.

A couple years after menopause in 2012, I started picking up weight. It didn't happen straight off. Most distressing... I was unable to get my cholesterol and weight under control on what many would consider a very healthy, low calorie diet . I was also doing several hours of daily exercise.

I hadn't been to the doctor in years. But at my well woman exam, the doctor told me that I had had a "silent" heart attack... as I write those words, I can barely believe it... and that they discovered from the ultrasounds that a portion of my heart was scarred. My cholesterol was high. I'd had angina (aching heart) for years, which was indicative of coronary artery damage/blockage.

Since I was "Doing everything right" it was suggested I go on Statins.

I'd read so many bad things about Statins, specifically how they worked by interfering with the creation of the substrate from which both cholesterol and CoQ10 (an important anti-oxidant) was created, that there was the risk of muscle aches/damage (heart is a muscle, hello!), that while cholesterol did indeed go down on Statins, it did not provide heart attack prevention for those who had already had one attack... I decided to try one more thing before going on them.

I'd continue to eat as I always had... a diet full of fresh fruits and veggies, little or no processed foods, and make some changes. Those changes were leaving all animal products... dairy, eggs, meat, fish... and all oils behind. That didn't sound too hard for me to do, since I was already half way there and make 99% of all my meals at home. Plus I'd already started reading info and watching Dr. Greger's videos on WFPB eating.

Well the results were dramatic.

My angina was gone within 3 months.
I took an arterial calcium test 9 months into this way of eating, to check for calcium deposits in my coronary arteries, (potential source of angina) and scored a zero.
My cholesterol fell to 170.
I began dropping that stubborn post menopausal weight... 20 pounds of it.

I'd love to say I also grew wings and a halo, but hey.... gotta keep things real!

I also take some supplements, some specific to me, others that are a good idea for everyone, including Omnivores. Those "good for everyone" ones that I took for decades would be B12, a high EPA/DHA fish oil (there are vegan algal sources, but I can't afford them. Ora makes a wonderful one if you can afford it), 2000 IU D3, Mixed tocotrienols (vitamin e), a calcium gummy I divide in quarters and have with meals or a snack, I also take pycnogenol and Thorne K2 for my varicose veins, primrose oil for its GLA due to menopause.

My thoughts are that change doesn't happen overnight... indeed for me I ate things like oysters and Greek yogurt for the first 6 months or so. But if you can just start by making small changes, a WFPB meal, a day, a couple WFPB meals a week... it will do your body good. 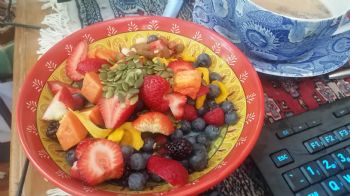