"Autism, or autism spectrum disorder, refers to a range of conditions characterized by challenges with social skills, repetitive behaviors, speech and nonverbal communication, as well as by unique strengths and differences." Autism Speaks

I love Micah. Micah is my 7 year old, grandson. He is Autistic. Years ago, I read a book called "SON RISE". It was a book about a woman whose son was born with Autism and her heroic efforts to keep him out of an institution and to bring him back from the brink .

Back in the day they knew little about Autism. It can be disabling and it's debilitating. It affects millions of children born every day with a condition on the "spectrum". The spectrum is that wide range of conditions that affect the strengths and challenges of these children. It is a method by which Autism is measured. The spectrum includes many different levels. Children can be severely disabled never walking, talking having to be fed and given 24 hour care and anything in between. Some don't learn the basics like potty training. They may need to wear diapers to counteract poor bladder and bowl control - whether potty trained or not. Often other disorders complicate the Autistic challenges, like dyslexia, depression, anxiety, ADHD, GI problems and sleep disorders to name a few. We are almost positive that Micah is dyslexic. He hasn't been diagnosed yet, but we have noticed with his reading and writing that he may transpose letters, such as writing" on" for the read word" no."

I was there, in the room the night that Micah was born. I had found the Sparkpeople less than one month prior to his birth. I was given the great honor of cutting the cord, so Micah and I have been close, since day one. I never thought that this tiny, little baby would become so important in my own growth and development. I never thought that the Sparkpeople would save my life.

I moved in with my daughter. I had been living with my son and helping he and his wife raise their son, Blaine. Blaine was 3. It was time for him to go to preschool and Jeni, a single, working parent needed my help. That is how Micah became my best friend. As he progressed through his first year, we noticed that he wasn't hitting development markers until later than other children had. As he grew it was harder and harder to feed him. He developed choking problems that scared me to death, because of troubles chewing and swallowing properly. He was slow to roll over, walk and talk. Jeni became worried, so when he was 18 months we had him checked and he was diagnosed with Autism. They can't tell in the beginning, with kids as young as Micah, just how high on the Spectrum these kids are. They told Jeni that he may never eat, walk or talk right. It was possible that he wouldn't develop past the toddler stage. She was devastated and that's when it was my job to jump in and provide as much help as I could. I learned about stoicism, determination, dedication and true love in the months/years that followed. I had no experience with the condition. I knew nothing. All I knew was that I had this challenged, little life in my hands all day long , 7 days a week, while Jeni worked two jobs to make ends meet and went to school. It was grueling and the Sparkpeople was my outlet and my companionship We immediately found out where we could take him for therapy. We started him in occupational and speech therapies immediately after his diagnosis. He was so little and already life had given him huge challenges to overcome. He went to therapy three days a week. I had to relearn how to raise kids. I had no idea how to deal with an Autistic child. I walked, walked and walked him as a baby, because he didn't sleep well and fussed all the time. I was at a loss as to how to make him better. When he was two he was still choking and throwing up because of his difficulties chewing and swallowing, he wasn't walking well and he wasn't talking as well as he should. The speech therapy helped him immensely with language. I have watched this child struggle with the vocal, while we tried signing as a way of communicating with him. He would get so frustrated that he would cry and throw fits, often hurting himself in the process. I had to learn how to deal with the tantrums and melt downs, which could happen anytime, anywhere for no reason, other than the sensory stimulation of lights that were too bright, or a sound that was too loud. Dealing with an autistic child is exhausting. He taught me a patience that I never knew that I possessed and he taught me how to fail, without failing him.

All through this difficult period there was one constant in my life and that was the Sparkpeople. I don't know what I would have done without the Spark that was lit inside me when I joined. I was 40 pounds overweight and dealing with an impossible situation. I was depressed, anxiety ridden and exhausted. Jeni was never home and I felt solely responsible for this little life. Sparkpeople was my lifeline. I joined groups that were of interest to me. Dealing With Depression and Living with Bipolalr Disorder - yes I am bipolar, which made everything that Micah and I were going through much more interesting -and the 5% Challenges plan for living saved me. The friends and support helped me get through some harrowing times and kept me sane and whole. The exercise helped me burn through the depression and anxiety along with my therapist. The friends and conversation helped me deal with both conditions and kept me company while I cared for Micah all day and all night with no stimulation/contact from others. Micah and I were isolated. I had no time for exercise classes, I exercised to the Sparkpeople videos and ordered Coach Nicole's DVDs. I joined in the 5% Challenge for motivation, activity and support later in his development. I was educated about food, eating and what it took to keep me healthy by using the tools and information on site. I needed to lose weight to solve some problems of my own - high blood pressure, high cholesterol lack of exercise and sleep issues. I had to do some things for me in order to care for Micah properly. That was the beginning.

Now, through therapy and hard work, Micah is 7 years old. He is in the first grade and is doing well. He was successfully potty trained, talks up a storm and is bright, happy and healthy - in part, thanks to my Sparkpeople association and the plan for living I developed through my participation in the 5% Challenges. I have lost the 40 pounds, thanks to the Challenges too. I am still a member of both the Dealing with Depression Team and the Living with Bipolar Disorder. I am well medicated and haven't had an major problem in several years. I credit the 5% Challenges with saving my sanity, since 2016 when I first joined the group. The really rough years are over. Temper tantrums still happen, because Micah is a pretty spoiled, only child, but melt downs are almost non- existent. Most behaviors are under control. When he went to preschool and school the heavy weight of complete responsibility was lifted and I had my own time again. Jeni is working only one job now and has time to be home with him. He thrives and that makes me happy. He is literally my best friend and cheer leader. God has been good and I am blessed with the most awesome little boy around.


The 5% Challenge has helped save my life - literally. If you want to eat right, get healthy and stay fit all while having fun, the 5% Challenges are right for you. We emphasize daily activity and reinforce good habits within a team environment. There is friendly competition between teams - 14 in all, so there is a diverse choice. I am a ROWDY REBEL. We are ROWDY and really rebels. If you are interested in what the 5% Challenges can do for you, follow the link below. Push the yes button and you will join the Summer Challenge Community. Pick your team from the PICK YOUR TEAM FORUM and you are on your way. 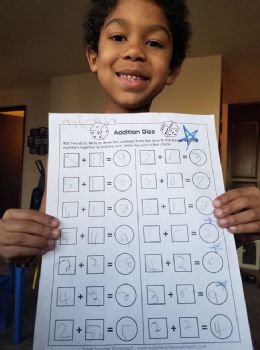 If you have any questions or need advice on Autism, please go to the Autism Speaks web site and they have resources and information.