"The Germs That Love Diet Soda": An Important Read 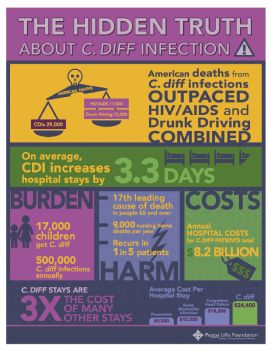 
The Germs That Love Diet Soda

Mr. Velasquez-Manoff is a science writer.

April 6, 2018
There are lots of reasons to avoid processed foods. They’re often packed with sugar, fat and salt, and they tend to lack certain nutrients critical to health, like fiber. And now, new research suggests that some of the additives that extend the shelf life and improve the texture of these foods may have unintended side effects — not on our bodies directly, but on the human microbiome, the trillions of bacteria living in our guts.

These substances may selectively feed the more dangerous members of our microbial communities, causing illness and even death.

Consider the rise in deadly cases of clostridium difficile, or C. diff, a terrible infection of the gut. The bacterium tends to strike just after you’ve taken antibiotics to treat something else. Those antibiotics kill your native microbes, allowing C. diff to move in. Nearly half a million people develop the infection yearly, according to the Centers for Disease Control and Prevention, and around 29,000 die, sometimes after long bouts of painful, bloody diarrhea. By one estimate, deaths linked to C. diff increased fivefold between 1999 and 2007.

One reason the bug has become more virulent is that it has evolved antibiotic resistance and is not as easily treatable. But some years ago, Robert Britton, a microbiologist at Baylor College of Medicine, discovered something else about C. diff: More virulent strains were outcompeting less virulent strains in the gut.

Dr. Britton and his colleagues wanted to know what gave these strains their edge, so they combed through over 200 sugars and amino acids present in the gut to see if these microbes better utilized some food source compared with others. The results of their investigation, recently published in the journal Nature, suggest a deceptively banal adaptation: Two of the most problematic C. diff strains have a unique ability to utilize a sugar called trehalose.

Trehalose occurs naturally in mushrooms, yeasts and shellfish, among other things. It has historically been expensive to use, but in the late 1990s a new manufacturing process made the sugar cheap. That was good news for companies that manufactured prepackaged foods, because trehalose works great for stabilizing processed foods, keeping them moist on the shelf and improving texture. Since about 2001, we’ve added loads of it to everything from cookies to ground beef.

What Dr. Britton and his colleagues contend is that, in doing so, we’ve inadvertently cultivated the most toxic C. diff strains, driving what has become a scourge of hospitals.

As evidence, he points to the timing of recent C. diff epidemics. The virulent strains existed before 2000, but they didn’t cause as many outbreaks. Only after large quantities of trehalose entered the food supply did they become this deadly.

“What this research shows is that people should be considering the ecological impacts of food stuffs,” Dr. Britton told me. “Our gut bacteria are being bombarded with things that we never ate — or never ate in the concentrations we eat now.”

Of course, as the old mantra goes, correlation does not prove causation, and trehalose is probably not the only factor behind the rise of epidemic C. diff. But Dr. Britton also found that mice infected with those virulent strains of C. diff that consumed the sugar fared worse than infected mice that were not fed the sugar.

His research adds to a growing body of evidence indicating that common food additives can push our microbial communities in unhealthy directions, not only potentially aiding the emergence of new pathogens, but also encouraging diseases like obesity, diabetes and inflammatory bowel disease.

Let’s back up and ask: Why have a microbiome to begin with? Why lug around a few pounds of microbes in your gut? One reason, the Stanford University microbiologist Justin Sonnenburg reminded me, is that these microbes can rapidly shift in response to new foods, helping us wring calories from a wider variety of foods than our bodies would normally allow.

As an example, he pointed to research on the microbiome of people in Japan. It has a unique ability to break down seaweed, and scientists think it acquired this talent by borrowing DNA from microbes that live on seaweed itself. The implication is that by eating lots of seaweed, the ancestral Japanese pushed their microbiome to evolve until it adapted to their diet. And they were presumably better off for it: Their microbes could extract more calories from what they ate, better nourishing them.

But that same flexibility can be dangerous when we push our microbial communities too far, says Dr. Sonnenburg. Our sugary, greasy diet diverges so much from the diet humans evolved eating, he and others think, that the microbes of westernized populations may no longer mesh well with the human body.

Gut microbes are kept slightly removed from the intestinal lining by a thin layer of mucus, and the Western diet seems to erode that protective barrier, bringing microbes too close. (A diet rich in soluble fiber, on the other hand, keeps the mucus barrier thick and healthy.)

Certain food additives also lead to a weakened mucus barrier. Andrew Gewirtz, a microbiologist at Georgia State University, and colleagues have found that the common emulsifiers polysorbate 80 and carboxymethylcellulose — often found in items like mayonnaise and ice cream — prompt an erosion of the mucus barrier in mice. They also seem to cause the mice’s microbes to produce proteins that inflame the gut, increasing the animals’ tendency toward obesity and diabetes.

Christine McDonald, a scientist at the Cleveland Clinic, has discovered something very similar with the food thickener maltodextrin, which seems to both thin the mucus barrier in mice and nourish a strain of E. coli linked to Crohn’s disease, an inflammatory bowel disease. The microbiomes of patients with Crohn’s, she found, have an enhanced ability to break down maltodextrin compared with people without the disease, suggesting that the germs potentially driving the disease profit from maltodextrin.

The prevalence of inflammatory bowel disease has, it’s worth noting, sharply increased in recent decades.

Then there are artificial sweeteners like sucralose and saccharin, which we consume in diet sodas and “sugar-free” snacks in hopes of cutting calories. Our bodies can’t directly digest most of them — they’re meant to pass right through — but it turns out that the microbes inhabiting our colons can metabolize the sweeteners, potentially to our detriment.

Scientists at the Weizmann Institute of Science in Israel have found that, in mice, saccharin causes glucose intolerance, a marker of impending diabetes — and one disease that those who eat these sweeteners are probably trying to avoid. When the scientists transplanted microbes from mice fed saccharine to mice that hadn’t consumed the sweetener, the recipient animals developed glucose intolerance as well, suggesting that the microbiome that was warped by the sweetener, not the sweetener itself, was causing the problems.

The scientists also fed a small group of healthy people saccharin-sweetened drinks for a week. In a subset of volunteers, microbial shifts occurred, accompanied by mounting glucose intolerance. So for some people, diet sodas may not be any healthier than regular sodas.

The big question is whether food additives are worse than the high-sugar, high-fat junk food diet they’re often a component of. Put another way, does adding maltodextrin to your supersize ice cream smoothie really make it more harmful than it already was?

Dr. Britton’s work suggests that, yes, additives may cause additional damage. After all, Americans were eating junk food long before the virulent C. diff strains began causing havoc; trehalose may have tipped the scales.


If that’s true, should hospitals, which often serve highly processed food — and are precisely where vulnerable people are exposed to C. diff — reconsider their menus? What about medicines, which can contain thickeners, artificial sweeteners and stabilizers — should they be re-evaluated as well?

We need more research to see if what scientists observe in mice also occurs in people, and Dr. Gewirtz is beginning one such study.

But a bigger problem, he told me, is that the Food and Drug Administration isn’t organized to address diseases that might stem from long-term tweaking of our microbes and the chronic inflammation that ensues. It’s focused instead, he said, on acute toxicity — how much of something makes you sick — and mutagenesis, its ability to trigger cancer.

Susan Mayne, the director of the F.D.A.’s Center for Food Safety and Applied Nutrition, disputed this characterization, pointing out that the agency has worked to get trans fats, which increase the risk of heart disease, out of foods. She added that the F.D.A. is actively monitoring the microbiome research but the science is still in “earlier stages.”

What can a person do in the meantime? Your microbiome is most likely shaped by the people, animals and even plants and soil you encounter, as well as the antibiotics you take and your own genetics, among other factors, and all these influences are hard to control. But we can control what we feed our microbes — what we eat.

We would do well to give them as much soluble fiber as possible, preferably in real food like nuts, legumes and vegetables. And we can add these concerns about thickeners, sweeteners and emulsifiers to our list of reasons to limit our consumption of processed foods.

Moises Velasquez-Manoff, the author of “An Epidemic of Absence: A New Way of Understanding Allergies and Autoimmune Disease,” is a contributing opinion writer.