I made this last night with Hazel. I know most days I just have a couple of protein shakes and raw fruits and vegetables but when she's around I tend to get creative for a few reasons. For one, I have more time to spend cooking and for another I want to actually eat with her. It's a bit of a challenge trying to find something that is soy free, sugar free, alcohol free, gluten free, vegan, and kid friendly but I've found a few things that she really liked. This one was awesome because she got to help me make it.

I started with this recipe: bbritnell.com/3-ingredie
nt-sweet-potato-gnocchi/ for sweet potato gnocchi but with a double batch so I had more for later. I did make a couple changes though.

1) My sweet potatoes were pretty small so instead of two large sweet potatoes I used three small ones (six total for a double batch)
2) I didn't have a potato ricer so I used a masher for the most part and did a little squishing in my bare hands
3) I also didn't have a gnocchi shaper so we used forks instead.

I think they turned out beautifully: 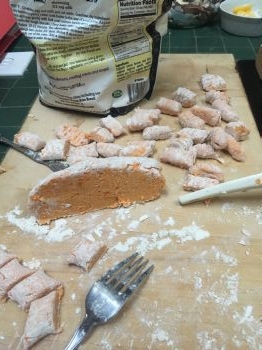 Hazel had a lot of fun shaping them as well.

I wasn't sure what to put sweet potato gnocchi in as I had never had them before but I figured a simple toss in coconut oil with some herbs would be fine. I had Hazel try some rosemary and sage but she didn't care for either. And then I remembered that I had a bottle of green apple angry orchard in the fridge and decided to use that instead. I mixed it in with some coconut oil, cinnamon, almond slivers, and a spoonful of gluten free flour to thicken it and it was amazing! Hazel loved it too and I told her we could make it any time. 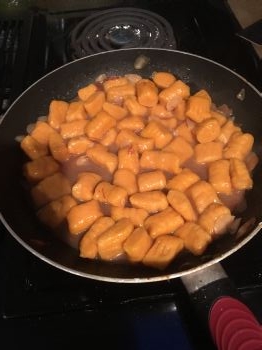 Leave it to me to take something Italian and make it healthy. This will happen again soon.