This is all new to me. But this just makes sense. My 'worker' worms creating uber-duber fertiliser while lessening my garbage output? What's not to like about that idea? I purchased the worms (can't get to my own as there's a foot of snow on the ground and it's -24 F outside) so it's the least they could do right? Their work is eating; that's a pretty good gig for a worm!

I was enticed by videos that I'd stumbled upon. So I thought why wait till Spring. I decided I wanted to make compost now so I'm not having to pay for it this Spring. Good quality organic fertilizer is gold at the market! It's too cold outside to get a pile to heat up so needed an inside solution. 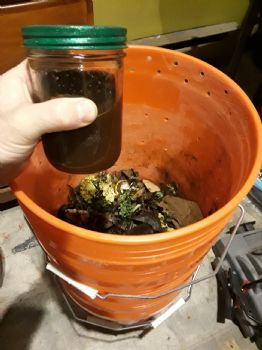 I used five 5 gal buckets I'd previously purchased for a project that never happened. Did all the cutting, drilling holes, etc., added the vegetable waste and worms and let them be.

Within two weeks, I have a jar of compost/worm spit. It's so dark brown full of nutrients that light can't shine through it.

And there's my dilemma. Do I just put this liquid directly into the plant's soil, do I dilute it, if so...how much?

I plan on adding three more buckets to the tower to get more scraps breaking down. I'll make a tower from re-used lumber as soon as I can find the ground (covered in snow).

Another question is, what type of worm is the best at making fertilizer out of veggie matter?
Share This Post With Others
Report Inappropriate Blog
Member Comments About This Blog Post