I have officially entered week 8 of 8 for C25k training app. A big day for me indeed...maybe not as big a day as my final day which will be Wednesday..but a big day nonetheless.

This morning I dreaded this run, partly because I have not been eating stellar the past week. I have had a few good days, but overall I have been eating horribly. Yesterday was my youngest daughter's birthday an although I avoided taking her to a buffet I still ate Panda Express and cake. I did however get up early, on a Saturday when most folks are sleeping in. I piddled around like I normally do on Saturdays, until I realized holy smokes it's getting late and if I don't leave right now I will be running when it is super hot outside...and I really don't like that. So I left, and everything an anything was annoying me at first. I couldn't get YouTube to cooperate with my newly found running hack phone holder. I switched to Pandora and that was being lame, I had to avoid getting hit by some dude who sat blocking the sidewalk all the way up to me approaching him...then he decides to speed off (freak). I complained internally that it was too hot (HA!) and my lungs hurt and blah blah blah. I complained until I hit the park and was out of my neighborhood. Then I caught my groove, I felt lighter and my lungs simmered down. All my stresses I was worried about seemed to melt away as I hit the pavement, an I realized how much stress I had been holding in. I am nervous about school, I'm nervous about a trip that is coming up in a few weeks for a wedding, I'm stressed about work, an a few other things. All that seemed to be stomped out the longer I ran. Sure I may be slow...BUT I am faster then I was 7 weeks ago that is for sure.

On Wednesday of last week I was doing a my last run for week 7 and I was tired and I didn't have the motivation to keep going. There is a lady I pass every morning when I go for my runs, we say hello and smile but that is it. On Wednesday I saw her of course, we smiled said good morning and that was it. Towards the end of my run, I approached her again. I smiled said hello but this time she cheered me on!!! It was as though she knew I was struggling to finish, maybe she didn't know that but regardless her little gesture of cheering me on and telling me to "yeah! go for it!" really pushed me to finish and finish hard.

I thought of her today and was bummed that I didn't see her this morning, because I would have told her thank you. Because she had cheered me on last week, I didn't give up. I didn't give up then and I will not give up now. I have found myself in a rut lately, I'm bored with routine at the Y and I have fallen off my super health wagon. Today will be spent refocusing and finding something new to do at the Y, so I don't give up completely like I have done so may times in the past. 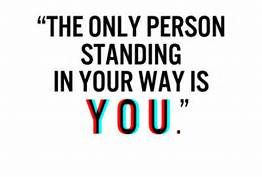