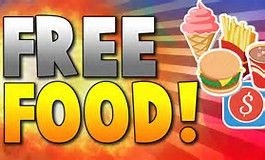 I swear, our office constantly has food for the taking. Yep, free food! Today it was half sandwiches from Panera Bread, bags of chips, pickles, portions of Jimmy John's subs AND Panera cookies! Left over food from various meetings - which goes in the refrigerator usually accompanied by a email that says leftovers in the kitchen free for the taking. Sometimes it is leftover party food, or cake, or other things people don't want in their house - so they bring it here!

Now there is something about free food. Its free. I deserve it. I wouldn't want it to go to waste. Not to mention my office is near the kitchen - so I can usually see it, smell it, hear the people saying how good it is and watch them gather. So when the Panera stuff arrived, I was away from my desk. When I cut through the kitchen to go to my office I saw people getting sandwiches out of the refrigerator. Someone commented that so and so took the last bag of chips - that they ALWAYS seem to get the leftover chips - grumble, grumble. What? There were chips? I didn't get the chips? Really? I set up the luncheon food for the person hosting the meeting. He didn't personally tell me there were chips? How rude! Grumble, grumble.

Well, I have been doing this healthy eating thing. Chips are really not on my meal plan. They could be if I really shifted around my other meals and planned for them - but I did not. Not only that - I really don't want chips to be part of my daily food plan! I don't need chips.

That little dutch girl that lives in my head whispered.... but they were free! 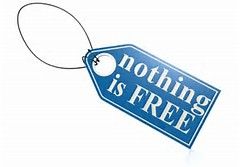 To which the grown up version of that girl answered.... nothing is truly free. Everything has it's cost - including those chips. Those chips would increase my calorie total for the day and probably put me close to or over the limit. My fat intake would be too high. My carb intake would be too high. My sodium would be much higher. Not to mention nutritionally they are not going to benefit me. I'd have to work out longer to accommodate the extra calories. And then she said - look at the photo Barb.

You see, I carry around one of those not so flattering photos of myself that was taken at totally the wrong angle and I look ginormous (is that a word?). The other half of the photo is of a thinner version of me - not at my goal weight - but looking much healthier. I quickly had a visual of what those chips cost. Yep, they aren't free and even if they are - I really don't want them. The frustration and anger lifted. I quit focusing on those people in the kitchen and returned to my work.

I've been around long enough to know that all those little shiny distractions that lead me off my path are rarely as good as they appear. They always lead me to this revolving session of anger, guilt, shame, frustration and hopelessness. Sometimes they lead me to using exercise as punishment for eating poorly - which is not at all the intention of exercise! That free food sounds expensive!

Those feelings always come after, when the consequences show up - you know, the too tight pants, the number on the scale, that yucky feeling from over eating, seeing those numbers on my food tracker. I'm trying real hard to remember those feelings BEFORE I put the food in my mouth - to make a conscious choice of what I eat and know where it will lead me after.

I love it when I can be mindful enough to see things as they really are. It doesn't always happen this way. Note to self: Next time you are faced with that free food - think about it's cost, where it will take you on your journey, if that is really where you want to go eat it- and if not - feel free to walk on by and not veer off your path! No regrets! Oooooooh, I love that part. NO REGRETS!!!!!

So you made it by this one... but there will be more! Next known challenge.... Thursday's bagel/cookie day and the office staff party. More will be revealed!