At last the hospital appointments are almost over, l'm just waiting to have more injections in my back, shoulder and knee then, hopefully, that will be it...for a while at least as l can have them three times a year.
Due to spondylolisthesis and spinal arthritis l know l'll never be able to go on the really long all day hikes l so enjoyed with my DH but l'm determined to try to do the utmost my back can take and if that means a bit of pain then so be it...l'm not giving up, l will keep walking!

The colonoscopy showed a tumour in my bowel which has been removed and was, thankfully, benign. The other two biopsies taken were fine too.

The seCAT tests showed up my liver/gall bladder problem...all caused by a hormone deficiency...which is long term but treatable, l'm on medication for that now (l'll be rattling soon...lol...) and feeling so much happier...all my worries seem to be to melting away one by one.
l'm feeling very positive and determined so watch out world here l come!!

My friend, Sheila, and l decided to work out a walking programme around the village. Nothing too strenuous yet as we build it up, we've decided twice a week to start with, Mondays and Wednesdays, as l'm also back babysitting my youngest grandson on Thursdays and Fridays so it spaces things out nicely and l can do a bit more work on it at weekends with my DH.
Yesterday was our first walk, we're aiming for around half an hour and as l need to sit down every few yards l took my little stool with me and we managed about a quarter of an hour's walk in one direction before turning for home.
lt doesn't sound much but to me it's a big deal and it's getting me out of the house again. l also left my stick at home so that was another first, it was by accident rather than design but l managed quite well though l think l would still take it if l was going alone. People keep saying l should get one of those walkers with a seat and l probably will eventually but at the moment l don't feel old enough, or ill enough, to warrant one and l don't think it would manage very well with the terrain l want to walk.
l have been pottering in the garden again which l'm enjoying immensely, l've really missed it, but it was so nice to walk down the village street again.
lt was absolutely breezeless, very hot and humid, not really a good day for my first foray but l still enjoyed it...we both needed a loooong sit down and a large glass of iced water when we got in...lol...

The sun was relentless, beating down on our backs as we walked down the main village street, it was like a ghost town, not a soul about...it reminded me of the siesta times you see in cowboy films and l half expected to see big colourful sombreros lining the streets with slumbering people under them!

Sheila's husband is a sheep farmer so we made a little detour to one of his nearby fields to see some of his lambs which had made a rather late appearance last month. They're used to been handled so were quite happy to come for a photocall, though one ewe wasn't so keen on us being there, baaing loudly and pushing her way in...they aren't even her lambs in the first picture...lol...they were so cute with their little numbers on their coats and wrinkly skin that seems to big for their little bodies. They're deceiving though, their hooves are quite sharp and they don't exactly smell very nice...lol...

l've missed seeing all the lovely bright yellow daffodils which line the village street, they're gone now but there were great swathes of dog daises in the field by the chapel, very impressive, so pretty, a beautiful sea of white.

We were tempted by the Old Star Inn...lol...excitedly discussing a nice sit down in a shady spot with a long drink so cold in caused condensation to the outside of the glass, chinking and clinking with ice cubes...but oh!! such disappointment!!
lt was closed!!
A nice long cool drink would have been so appreciated...we did have our water bottles with us but it's just not the same!
l love the interpretation on the pub sign, quite unusual.

We could hear a tractor droning desultorily in the still air, the harvest has begun, the farmers are harvesting their first crops of spring barley, it's quite early due to the lovely weather we've been having. l loved the way the sun made the golden glow of the bales stand out.

We turned for home walking down through the old derelict alms houses now used for storage by a local builder, the sun through the beech trees dappled the ground, he had oodles of old tiles and pots stacked outside one of them, they seemed to take on a bluish hue in the sunshine for some strange reason making me think of lazy summer afternoons in Greece or France.

l'd made a big jug of iced, minted, lemon water ready for our return, it was waiting for us in the fridge, l'd put the glasses in there too, and was very welcome as we lolled in the shade of the cherry tree, sipping lady like, as we watched the fish sunbathing at the surface of the pond...and a little common frog's eyes peeped out over the surface of the water watching us whilst another one sat cooling in the waterfall.

The white tailed tree bees droned lazily from their home in the abandoned nest box above our heads, visiting the blossoming flowers and returning with saddlebags bulging with yellow pollen. l sort of felt sad for the guard bee, he was positively animated, buzzing here, there and everywhere, checking each arrival to see if they could enter...he made me feel tired just sitting watching him...lol...he was so vigilant he never stopped.

On reflection l enjoyed the walk very much, a cooler day might have been a bit better (we've had some terribly wet days just before this two day heatwave arrived) but we mustn't complain about this heatwave we've got, it won't last forever.
Being with a friend made it a lot easier...we did a fair bit of talking and laughing!
My little stool is a godsend.
l'm in quite a bit of pain but to be honest, it's rather a nice ache as it feels like an achievement and it's not so much different to what l usually have.
l'm relieved my shins aren't hurting, that was my big worry as it's so debilitating that if they'd started l wouldn't have been able to make it back home until they'd stopped, thankfully the longest continuous pain with them has only ever been about twentyfive minutes before they eased enough for me to go on, so l hope they don't play up or, at least, never get to that stage whilst l'm out.
ln conclusion: l'm never ever giving up.
l'm going to keep right on walking and hopefully one day l might even manage some sort of truncated hike with my DH again and my poor bewildered old friends...my trusty walking boots...won't feel left out!
Miracles can happen!

Ever the photographer, here are a few photos for you: 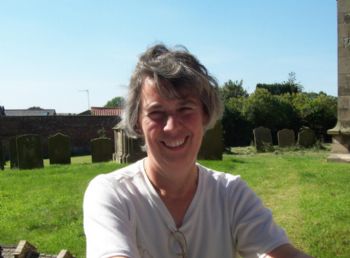 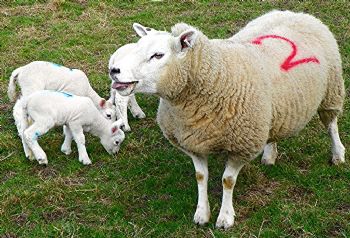 Mrs. Ewe wasn't pleased to see us...and they're not even her lambs! 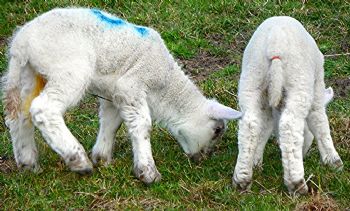 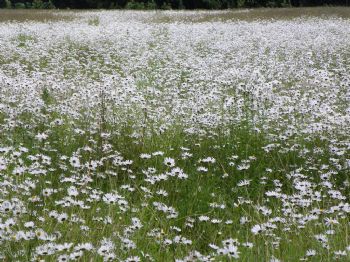 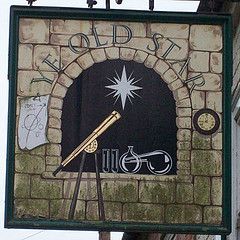 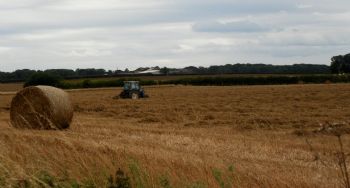 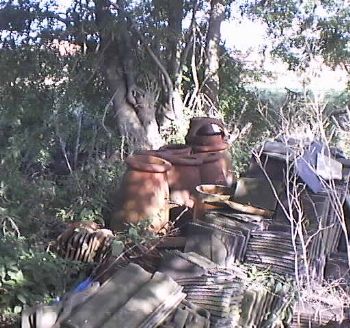 Pots and tiles remind me of lazy sunny summers in Greece or France. 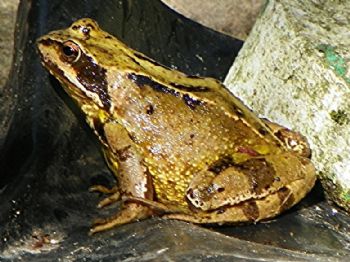 Froggy in the waterfall. 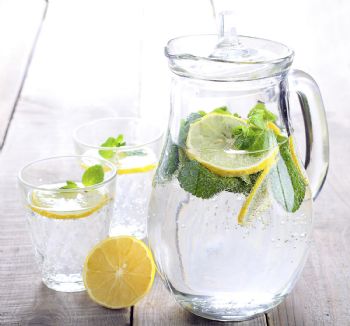