It's been awhile since I blogged. I'm out of the post surgical boot and my foot is doing much better! I overdo it every three or four days for a day or two and then have to rest it for two or three days but when I get done resting it, it feels better than it did so I guess it's kind of like having a really tough physical therapy session twice a week! The doctor said it won't be completely healed from the break until the six month mark but as long as I don't do any marathons (as if I could at this point lol!) I should be just fine to walk around if I take it easy when it begins to really ache. Truth is it doesn't really ache until it's too late and then it actually hurts by the time I notice it so there you have it!

I managed to lose six pounds in the six weeks I was in the boot! I'm surprised about that because I didn't always behave in the eating department during those six weeks. I guess dragging around a boot that weighs about ten pounds has some perks!

When I did my reboot with living healthy I started in with my attitude first. It was a good decision. I decided that no matter what happened, I would find the blessing in it even if it looked like a bad thing. It has worked miracles in my life! Sometimes I can't see a blessing until the situation is settled but one (or more) is always there to be found. I have a more positive outlook on life and I don't have any resentment about changing my lifestyle this go round. They aren't the big Biblical miracles but they are pretty life changing for me.

Here is a good example. I was having terrible muscle cramps. I wrote about them in previous blogs. I had to go see specialist after specialist. I finally begged my PCP to change my muscle relaxer to see if it would help. She agreed on the condition that I go ahead with my appointment with a neuromuscular specialist (that is a neurologist with extra schooling to deal with muscle diseases.) I promised. Well the new muscle relaxer took care of the problem and I didn't want to go see the neurologist BUT I had made a promise so I kept my appointment. I was having a terrible tremor in my right hand and arm that I thought was being caused by other things and I brought it up to the neurologist. He immediately diagnosed it as an extrapyramidal symptom. That is a symptom brought on by certain medications like the medications I take for my bipolar. If you don't get off the medication (and sometimes even if you do) these symptoms can become permanent. He wrote a note for my psychiatrist telling her which medication he suspected. I went to see her a week later. I was warned when I got off the medication that first off, it would get worse before it got better. Secondly that IF it went away it would take several months. That was the first week of April, right after my surgery. I have been without that tremor in my right arm for three weeks now!!!

There you have it. Had I not started having terrible muscle cramps, which are gone with no hard and fast reason for them ever being found, then I wouldn't have ever seen the neurologist. I would not have brought up the tremor that I thought was caused by tension and lack of sleep and he would not have diagnosed the true problem. I also was at risk to have that tremor be a part of my life forever or at least go through months of having it there and slowly getting better. (This is where God comes into this!) Instead I said a prayer of thanksgiving and told the Lord that I really hoped it would go away but that I was thankful for the medication that let me keep my family and my very life at the time I was put on it. Instead of the tremor being permanent, it went away months before it should have. Blessings abound!

Another piece of good news is this: My psychiatrist does not feel that I need a medication to replace the one I was on! Now that may change down the road as the bipolar is known to take some sharp turns here and there but for now, I'm off of a medication and doing great mood wise! In fact I'm better mood wise than I have been in years simply by changing my way of looking at things.

So if you can, take a few moments today and look at what situations you thought were really bad at the time that have since turned into something good. It may just change the way you think and feel! 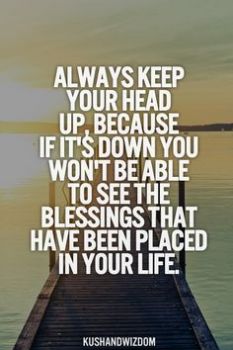