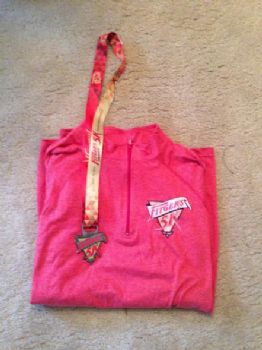 I did run a 5k last month, I just forgot to blog about it. I ran in the morning, April 22 and that evening my gall bladder decided to be very angry and by mid-day the next I gave in and went to the emergency room. On Monday they put me under and removed all of the gall stones from my common bile duct. I had so many stones in there they had backed up to my liver and I was jaundiced. On Tuesday, I had my gall bladder out. 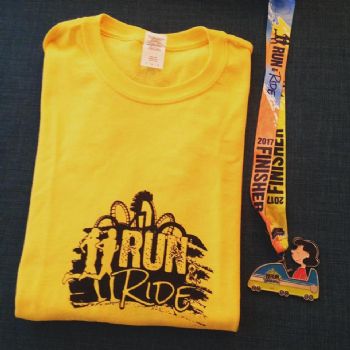 Fast forward to May 20 and I completed my 5k for May. I tried running it, but after mile 1 my insides were rather irritated with me and by mile 2 I could do nothing but walk. I hadn't actually tried running since the surgery, but I wanted to move forward on my goal and I had signed up with a friend. She was awesome and stayed with me the whole time, even though it was her first 5k ever. Afterward, she said that she had always thought she hated running, turns out she hates running on a treadmill, lol. I have to admit, running during a 5k event is much better than simply running alone (at least for me).

I am proud that I have stuck to my goals and am 5 for 5 of my monthly 5ks so far. I do wish I hadn't tried to actually run the whole thing and had listened to my body around mile 1. I am still rather sore inside and need to listen more to what my body is telling me. That being said, my next 5k is about 2 weeks out and I hope I am healed up a lot more for that one :-)
Share This Post With Others
Report Inappropriate Blog
Member Comments About This Blog Post