lt seems a long time since l've attempted anything like a walk but l've now been told l haven't got Polymyalgia Rheumatica, l've had loads of tests, X-rays etc and l've got osteoarthritis in my left ankle, knee, elbow, wrist and fingers plus in my right shoulder which also has damage to my rotor cuff which is very inflamed, and the reason why l couldn't raise my arm above waist height, so l've had corticosteroid injections in various places which has helped enormously.
l also had an MRl scan on my back and have now been diagnosed with spondylolisthesis, one of the bones in my spine has slid forward over the top of another bone causing the disc to bulge, and severe osteoarthritis to the inner bones of my spinal column causing a narrowing of the spaces in my spine which is either trapping or irritating my spinal cord and nerve endings, it gets worse when l stand or walk as the spine straightens and causes the spaces to narrow even more so causing all the pain and difficulty with walking and, strange as it may seem, now l've got a diagnosis l actually feel happier with myself. l've been referred to a neurologist to see what can be done and have been given some stronger painkillers which are helping. l can walk short distances but the pain in my back and legs can get excruciating and l frequently need to sit down and take a short rest before l can go on again. Standing for any length of time is just as bad and, as much as l love meeting and talking to people, l just hope we don't meet too many who want to stop and chat too long. There is also an excruciating intermittent pain in my shins, it's hard to describe, sort of like bad cramp but in the front of my legs, it feels so deep as if it's in my bones. lt's caused by a nerve and is so bad at times it makes me cry...l don't do crying...lol...so you can tell how painful it is when it comes on, absolute agony!
Luckily sometimes when l'm sitting there is no pain or just an ache so that's definitely a plus sign though lack of exercise is not good.

Anyway l decided l wanted to attempt a short walk but l didn't mention it to DH when he suggested a ride out as the weather wasn't too bad. lt kept showering but in-between the sky was blue, the breeze was light and it was warmish. We usually decide together where we want to go but this time l let him decide and he chose a garden centre not too far from home as he wanted to look at aquatic plants for his pond.

The garden centre is on the banks of the beautiful river Hull and mill race, in the grounds of Bell Mills, a working mill and it's complex. lt's usually very good for wildlife, you can see trout in the mill race and there are ducks, geese, and swans on the river, if you're really lucky you might even see a water vole, they're scarce but l have photographed them there on other visits.

We set off in good spirits, DH was happy and l was dosed up with painkillers in anticipation of a walk. l sort of feel guilty that l've ruined his walking as he won't go without me siting 'lt's not the same' so l was hoping everything would work out. l wasn't going to be the anything like the rambles that we used to do but it would be a start.
We decided on the scenic route to the centre, taking in the rolling wolds and the valley's where we live. We're very lucky to live in what the media is now calling 'Hockney Country' due to his paintings of the area but we just call it 'the wolds' and we've known how beautiful it is long before David Hockney even heard of it!

We stopped up at the top of the wold on the old Roman road known as Balk (we pronounce it bork) looking down into the deceptively named 'Langtoft Bottom' and what is actually a very pretty view over the surrounding countryside.
The birds were singing loudly as we stood in an opening between huge mature trees gazing out across the fields. The corn was growing well and on the valley sides fields of oilseed rape tried to dominate the skyline with their bright yellow flowers. The smooth trunked beech trees were breaking out their delicate, young spring green leaves and everything looked so clean and bright.
The verges, once covered with yellow dandelions now sported feathery white clocks, their sugar stealer seeds drifting off on the breeze to colonise more ground.
A covey of partridge flew up squawking loudly in alarm, ke kicka kaa, ke kicka kaa, as they flew off further down the field and a blackbird tut tut tutted at us from the top of the hedge. Swallows skimmed the corn foraging for insects and a brown hare lolloped across the field at our approach.
l felt elated, l wasn't walking, l was just stood but l suddenly felt empowered and knew that when we got to Bell Mills l would walk. l must have been smiling at my secret, as DH said 'What are you looking so pleased about'...lol...little did he know!

We followed the old Roman road over the tops, so straight and smooth, the Romans certainly knew how to build things that last, heading into yet another valley named 'Spellowgate', a beautiful ride through open countryside, the roadside verges yellow with crosswort and cowslips, taking us to the banks of the magnificent river Hull with it's Mill complex and the garden centre.

We parked up in what can only be described as a beautiful carpark right on the banks of the River Hull with ducks, swans and other birds literally at your feet as you step out of the car. There were a few cute little mallard ducklings and a pretty mute swan cob came to say hello, he was all alone as his 'wife' is sitting on a huge nest a little further down river.

We perused the plants in the aquatic area of the centre but nothing caught our eye and we ended up buying a ball of garden twine and a tray of young leeks!
We took them back to the car and DH got in expecting us to be riding off but l surprised him by saying 'Let's walk down to the bridge', he looked at me with his head cocked for all the world like a little bird and then got out of the car again. He didn't ask any questions or say 'Can you manage it' he just took my hand and off we trotted.

lt felt so invigorating, it's ages since l've tried to walk any distance...and failed miserably...but somehow l knew l was going to do it.
And l did!! Yay!!
We strolled along the river bank under the beautiful weeping willows with their newly leaved branches trailing down to the water, they look so delicate, l think they're my favourite tree.
Rounding a bend in the river we came across the mute swan pen sitting on her nest on a little island, she was loudly encouraging a passing mallard duck to keep his distance.

The river bank grass was full of tiny blue forget-me-nots and bright yellow celandines and everywhere were the black seeded sedges which are abundant in this area.
There were quite a few vole sized holes at the bottom of the reeds at the edge of the far bank but sadly no vole came to greet us.
Pretty butterbur flowers appeared now and again, such an unusual flower with it's large head made up of smaller flowers which in turn are made up of even smaller delicate tiny pink flowers. lt's a member of the sunflower family and always a joy to see.

By now my back was so tense l needed a sit down, l'd been expecting to have to find a log or stone to sit on or else the steps of the bridge but rather luckily for me a bench appeared and no one was sat on it. lt was dedicated to 'Tom' and it seemed like a godsend as l almost collapsed on to it but managed to hide my discomfort and sat, rather ladylike l thought, instead of flopping like l really wanted to...lol...DH was very complimentary about how far l'd walked, which really was only a matter of about 100 yards but was the farthest l've done in one go so l was really pleased with myself and tried not to think about the fact l still wanted to go a bit further plus l had to walk back too...lol..so l'm getting there, slowly but surely and intend to try a few more steps everyday. l struggle with getting up off the ground so the hard part is finding something to sit on especially if l'm alone and there's no helping hand.

Ever a sucker for punishment l insisted l could go a little further and we continued along the river bank. lt was so peaceful with the water gurgling along and the birds singing or honking or quacking, we never met a soul, it was just us in a perfect place at a perfect time...and no showers!

l managed the walk back with a sit on the bench as on the way there then into the car for the return journey, this time driving through the little market town of Driffield where the decorations were still up for the Tour de Yorkshire bike race which had passed through. Everywhere was blue and yellow bunting, decorated blue and yellow bicycles hung up, very pretty. l missed the race which actually passed the end of our village as l was busy at hospital having an MRl scan on my back so it was nice to see how the town had celebrated.

Well, hope you enjoyed my short walk, here are a few photos to go with it: 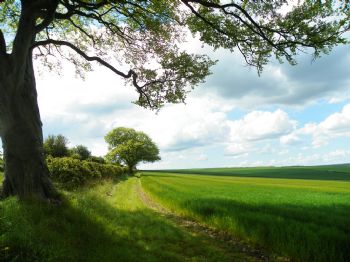 A view across the valley. 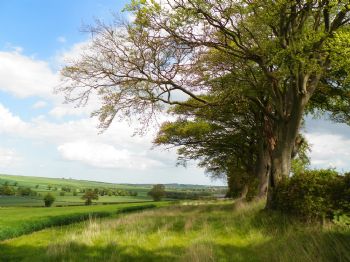 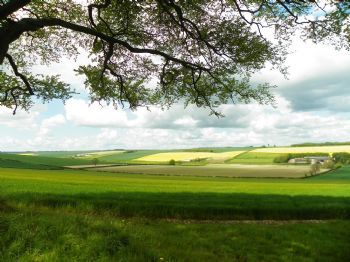 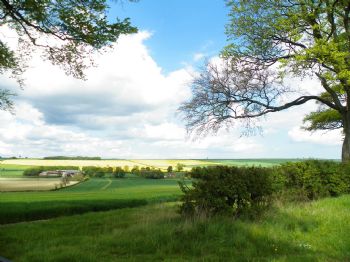 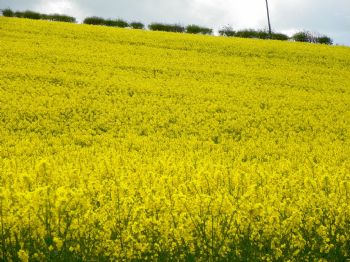 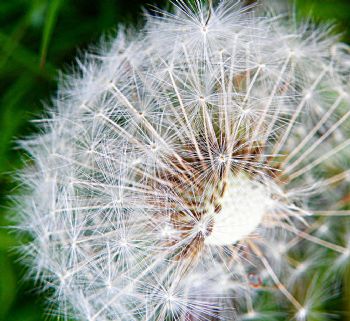 A dandelion clock with it's pretty sugar stealers. 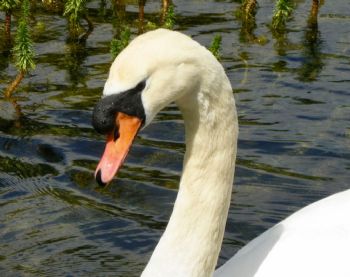 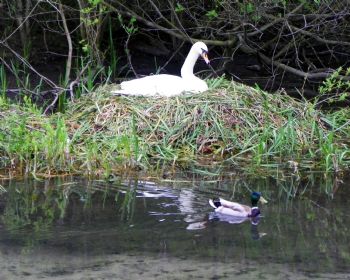 The mute swan pen warning off the mallard duck. 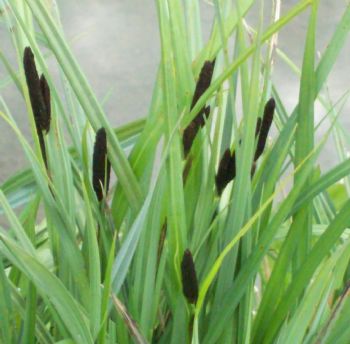 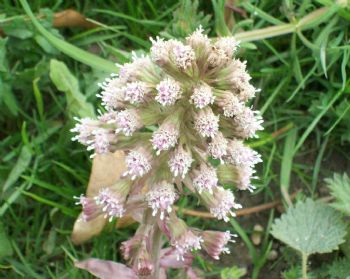 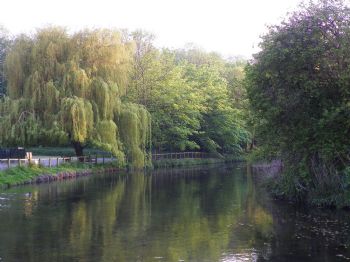 Weeping willow trail their leaves in the water. 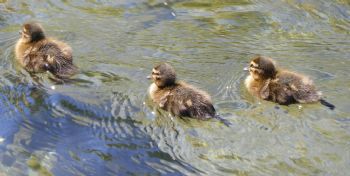 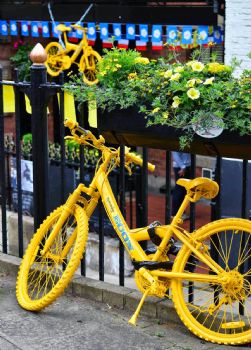 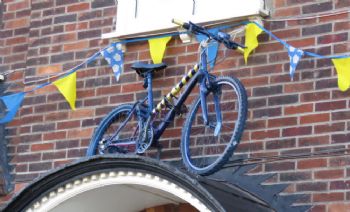