A bit of a shock!

I went to my pre-op/consent appointment for my foot surgery yesterday. I learned exactly what they are going to do and what decompression means. They are going to shave off the two bone spurs - this I knew. Then they are going to break my big toe, align it properly, and put two screws in it to hold it in place. This is what they do to decompress the joint. It was a bit of a shock to me as I had it in my head that they were just going to pop it into place or something like that! This doesn't change my mind one little bit because he said the magic words: "Once it heals up, you won't be in pain anymore!" That was the only thing that I hadn't been expecting from the appointment.

Total time from operation to total healing will be approximately six months. I can begin chair exercises as soon as the stitches are out assuming that the swelling is down and the pain is manageable. I will be given some stretching exercise for the foot at that point a well. I can start "weaning" myself from the boot at six weeks and should be able to be completely out of it by eight weeks. I had assumed that I would be totally healed at eight weeks but that was before I knew that a bone would be broken. Given that, six months seems like a short enough amount of time.

I will have to take "spit baths" until the stitches come out at two weeks due to the fact that I can't get the stitches and bandages wet. They have a plastic protector that I could get so I could shower but big as I am and the way I must balance to reach everywhere, I would slip in the tub given the soapy water mixed with the plastic. I am going to get some dry shampoo so that I can keep my hair clean as well. All in all I think that the not taking a shower is going to be the worst part of this whole thing!

I'm not downplaying the pain I'm going to be in after surgery but I have pain medicine to help with that and when it's all said and done, I will be free of the pain I've been experiencing for the last three years and the extreme pain I've been in the last three months! To me, it's a fair trade off. Hurt worse for a short amount of time to be out of pain for the next fifteen to twenty years! 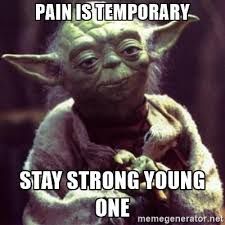