Are you singing that old Pointer Sisters song now?

I have to start with the so excited part, I'll close with the celebration. So I had my annual physical yesterday. Last year at this time my doctor brought up the fact that I was in the obese II category. She made it clear that there were health issues related to obesity and closed her brief statement with "You are an adult. You know what you need to do" and quickly moved on to another thing. I swear I felt as if I was flogged in the town square! I didn't like the fact that she even mentioned my weight. My old doctor (who retired) never did that. I briefly wondered if I should look for a new doctor. I decided to give her a chance.

I had my lab work done two weeks before my appointment. I got the results of my lab work. I quickly scanned my cholesterol (my overall was 190, but my HDL was on the low end and my LDL was on the high end), my glucose level (up from last year at 112)- and then looked for anything outside of the "normal" range. My thyroid was low. My weight was up 2 pounds from last year. Ugh.

I truly expected to get holy heck from the doctor. Instead she came in and after some small talk said let's go over your labs. She said "I don't know what you are doing, but keep it up." She went on to say that my overall cholesterol was down from last year and my other numbers were better than last year too. She went on to say my blood pressure was excellent. She brought up the fact my thyroid was low, but wanted to retest to make sure the reading was accurate. Then she went on to the elevated glucose. She said it wasn't high enough to warrant medication at this point. She said "If you continue doing whatever you are doing, I feel we will see this number come down. Let's look at it next year. If it does increase then we will discuss it." She did once again say I was in the obese category. She did not bring up my weight gain. She said "I can see you are working at becoming healthier, let's keep that up."

Say what? Really! I felt like I just won a gold medal!

I know I have work to do, I know I am far from my goal weight - but I have been making some better decisions and believe it or not, those small steps ARE making a difference!

So now I have to fess up about the celebrations. I swear there have been a lot of them bunched together, kind of like my medical appointments this month!

Yesterday was a coworkers 70th birthday. We all went out to lunch at Bravo. I found a chicken dish on their lunch menu that was 540 calories - which was my choice. However, then there was this 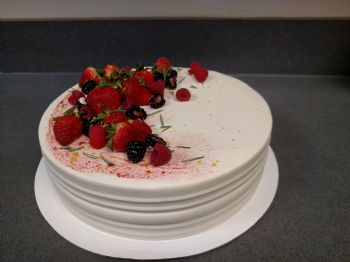 How do you not have a piece of that? I did have a slice. Immediately afterward I went to my doctor's appointment. I was scared to death they were going to want to do one of those finger prick test your sugar level things - and it would say "Walking dead". Phew! They never did. Talk about feeling like you dodged a bullet with your name on it! And then I had to try to figure out how to track that slice of cake. I know whatever I selected was wrong - but it was cake with a lot of calories.

I kept hearing my doctor's voice saying "Keep doing what you are doing" and I thought to myself, if she only knew! But I know - and I know that isn't what I normally do!

So today was weigh in day. After three episodes of eating out and a couple days being light on exercise I expected the worse. However, Mr Scale was indeed kind and moved downward a little over a pound. I felt like I didn't deserve to see that. There have been weeks where I have worked really hard and not seen that happen. I quickly stopped myself. No raining on this parade. Celebrate the victories Barb. Always celebrate the victories and be grateful!

I am on the path! I am taking steps forward! They may not be big, bold steps - but they steps in the right direction. For the first time in this journey I truly feel like my goal weight (even though it is many pounds away) is obtainable and possible! I am going to relish that feeling. I am going to bask in it......after I get my exercise in. I am going to keep doing what I am doing and once in a while it may include a slice of an exquisite cake - but only once in a while!