Ever procrastinate? Well 15 years ago at Christmas, I didn't call my sister to make plans for the holiday. The holiday was the only time we got together during the year. We are not close. She lives about an hours drive from my house. She is 14 years older than me. she moved out of the house when I was 5. Sometimes I feel like she is a stranger and I know some strangers better than my own sister. I hate that.

Then came facebook. My nieces and nephews had facebook accounts and sent friend requests. I learned my one niece had divorced and remarried, my other niece had four children that I had never met, my nephew had moved to upstate New York, my other nephew lived in my home town, mere miles from my house. Who knew! We actually started getting reacquainted on facebook!

I'd see the posts of my nieces and sister on their annual fall color tour trip to wine country, touring the wineries. I wished my daughter and I were invited, it looked fun! There were photos of birthday parties, holidays.....still, I never picked up the phone.

Neither of us are getting any younger. This past couple years I have lost some dear friends. I decided it was time to take action. I didn't want to have regrets later that I was too afraid to pick up the phone. I really WANT to get to know my sister, even if we didn't grow up together and don't have that connection most sister's have.

This year, my sister was turning 74. I knew her kids would celebrate her birthday - so I texted my niece and invited myself. Funny, but they were excited about the idea. My daughter followed my lead and invited herself too! They asked her to bring her family with her - they had never met her children! It had been 15 years. 15 years of procrastination, 15 years of wondering all ended with a simple text.

So we met at a restaurant nearby and I knew I was going to have a hard time staying on track there - but I went regardless. We had a wonderful time. It was good to reconnect and see each other in person. We caught up on the last 15 years, laughed much and vowed that we would do better in the communication department! Afterwards I came home and did my best to track my meal on the tracker. Not the best choices, not the worst either, but no regrets! After we went to her house for cake and ice cream.

Sometimes you just have to suck it up, put aside your pride and fear, and put one foot in front of the other! 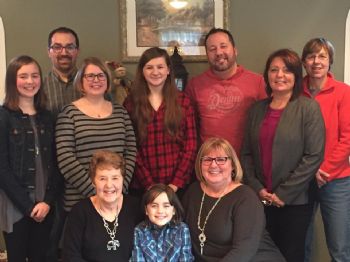 Here are our combined families, missing my nephew in upstate New York. 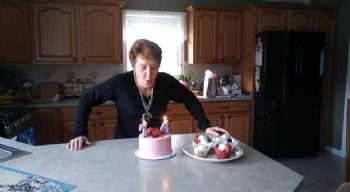 and my sis blowing out the candles.... 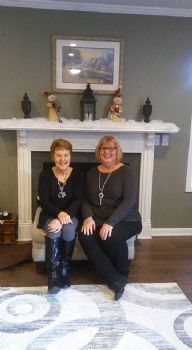 and one of the two of us!

I hate photos. I try to hide behind people. I don't like the way I look. I don't like that I am twice the size of my sister! However, I am learning to put all that aside and appreciate things as they are. I love that the two of us were given an opportunity to do things differently!

That said, now I have steps to take on another journey! No more procrastination!