A Rough Couple of Weeks

In addition to all the physical issues I've been having, this past week and a half have been rough. 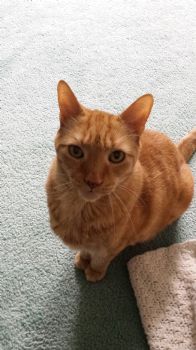 My eldest cat, Kitty, who was 16 years old and had diabetes and arthritis, had neurological problems and went downhill very quickly. We had to put him down. It was heartbreaking. We've had him for 14 years. 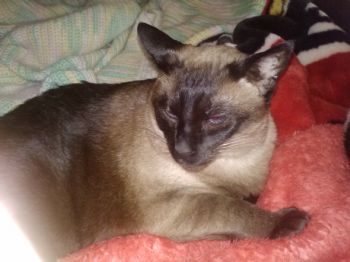 My Siamese cat, Lady, who we've had for 9 years, has not been eating well since Thanksgiving. She's lost over 5 lbs. We tried different foods to try to get her to eat, even tuna fish, which is her favorite. After taking her to the vet and having a blood panel performed, the doctor couldn't find anything wrong with her. We took her to a different animal hospital to have an ultrasound done to see if they could find anything. They're 70% percent sure she has cancer of the stomach. Just to be sure, we had a biopsy performed. We should hear back about the results by tomorrow. We've already talked about the possibility of her having cancer. My husband had cancer and he doesn't want her to have to go through that so if the results come back that she does have cancer, we're going to have to put her down too. My poor baby. She's practically starving herself to death.

So if that wasn't enough stress going on in my life, my youngest son, Stephen, who lives with us, had an accident at work. He works in a restaurant and as he was cleaning, he slipped and his hand and half his right arm went in the oil of the deep fryer. I had to take him to the Emergency Room but that hospital didn't treat burn patients so they had to have us transported by ambulance to another hospital's Burn ICU. He has 2nd degree burns. They admitted him to the hospital so they could keep an eye on him and see if he needed any skin grafting done. So far he hasn't needed any. He's still in pain. He has to see the surgeon later today. I'm worried because he can no longer feel his fingers. It seems like his recovery is going to be a long process.

Ok, and if that weren't enough going on, I fell down the steps this morning on the way to church. I hit the back of my head, my arm, and my lower back, which I have problems with already.

I just have to keep reminding myself that God won't give me more than I can handle. It's in him that I find my strength.
Share This Post With Others
Report Inappropriate Blog
Member Comments About This Blog Post