My First HALF CENTURY 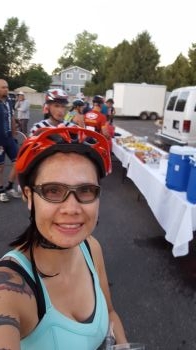 Over the weekend, I did a HALF CENTURY!!! (This is a 50 Mile bike ride) I did not know if I could really do it. I was scared, nervous and a bit crazy before the race.

Even though I have been training, I had never actually rode 50 miles before on my bike. I have gone maybe 30 miles and it took 2 1/2 hours. i was expecting this event to take me about 3 hours.

I didn't get any sleep the night before, I was so anxious and worried. Did I have everything that I needed? Am I going to get lost? Is my Garmin watch charged enough? I wonder if my bike is okay outside right now, is someone going to steal it? What if something goes out on my bike? Do I know how to fix anything that could go out on my bike? I hope I don't have to walk my bike.

I got to the starting line. It was a 6am start time with about 900 participants. I was a bit groggy. I ate the light breakfast that they served and took a deep breath. My triathlon teammates were there, but I didn't expect them to stay with me on the course. We took a group pic and then we were off.

I felt great at first. It was a bit cool outside and with so many people around, it was easy to draft behind them. I didn't feel like I had to peddle at all while I was drafting. It was pretty nice. But, I couldn't draft forever.

The aid stations were well stocked. They had licorice, goldfish, soda, candy, brownies, Gatorade, porta-pottys and music playing. I have only done running races and triathlons, this was my first "bike only" race. At the aid stations, people were just chilling, laying under a tree, eating breakfast and casually socializing. There was no "rush." It was like a party.

Next, I had to go over a big hill. I was going so slow. It was really hard and I was peddling as much as I could but it seemed like I was barely moving. I go off my bike and started walking it. It seemed like I would be able to walk faster than I was peddling. I was still huffing and puffing. After I got most of the way up the hill, I decided to re-mount on my bike. In the process, I clipped in my peddles right when I fell down. I got pretty scraped up. I got back up and tried again. After the third attempt, I finally made it back on and finished my way up the hill. "whew..."

After a nice downhill ride at 30mph, I got to the next aid station. 30 miles already done. This was so fun. I couldn't believe I'd gone that far already. There were no more hills. It was flat from here on. I was just cruising. I turned my head and looked around a bit. the air was fresh, the sun was out and I got to see some nice rural communities all around me.

At the final aid station at mile 40, I was starting to feel a bit sad. The ride was almost over. Although I was tired, I was enjoying the ride. I found some folks to draft behind on the last 10 miles and I was going fast. It made the last little bit go by really quickly.

I felt very proud of myself and I'd do it again!! 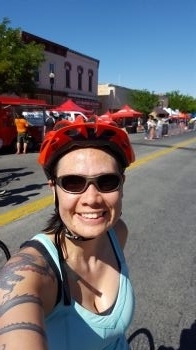