My Run with the Alligators 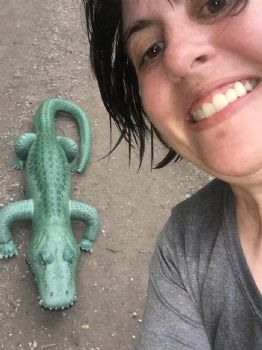 50K was a big goal of mine for two years. I wasn't as ready as I would have liked to be, but I got it done anyway in 12 hrs 50 min and 46 sec. And I saw real alligators basking by the trails (at Brazos Bend State Park) as well as the fake one they threw out there to startle us!
It was a blast! It was mentally trying, exhausting, chafing, and yet it satisfied a need I have to push myself beyond, in a way I can't explain. Someone asked if it was fun. I couldn't really say yes. The events before and after were fun. But the ordeal itself, while not fun, was oddly rewarding and satisfying. I will run it again and again, until I'm better at it.
My friend Cindy who is in her mid-fifties also finished her first 50K and her daughter finished her first 25K. I am so proud of them both!
Well, the thought of never wanting to feel that terrible again during a race has motivated me to workout all the time again. I've reclaimed my mornings, getting up just an hour earlier to workout before I have too much to do. So far so good. I'm also trying to eat better.
I ran the first loop at a really good pace, but during this time, my new outfit wore ulcers all over me. Four miles later, I got to the bag drop and changed and slathered in zinc oxide, but by that point the damage had been done. It slowed me way down. Then my shoes went flat. How did I forget to think about the mileage on those shoes going into this race?! But it happened. So for the last eight miles, I was hobbling, had to lose my socks, had used a whole tube of zinc oxide and my pace dropped to 35 minutes a mile. Every step stung.
I came into the finish, glad to be done, but committed to not letting life derail my training ever again. So it is possible to finish a 50K having only gotten in two runs a week for the past four months, but I don't recommend I do it that way ever again-LOL.
My next 50K race has got to be an automatic PR, right?
Share This Post With Others
Report Inappropriate Blog
Member Comments About This Blog Post