Sometimes it takes a series of little things to happen before you see the light! Well, yesterday I saw the light!

I truly enjoyed our race together. Something fun and fit that the girls in the family could do together. When I competed last year, my time was around the 43 minute mark. I thought to myself "Stick with your fitness goals Barb and maybe next year that time will be a little quicker." In my heart, I'd love to run with the grands and daughter. However, that is probably not a reality. I have a knee replacement. Running at my weight is nearly impossible. At a healthy weight, I could probably do it for a race - but I couldn't take up running for a sport.

Well that year ticked by. During that year, my healthy eating went by the wayside. The pounds crept back on. I ignored them. I pretended they weren't there. Clothes got tighter, climbing the stairs at work got tougher, walking became more difficult, heck, most things got more difficult.... even sleeping! I chose not to see those changes, sort of like living in the dark.

Sunday, I saw the light.

We got ready for the race. I had to order a 2X shirt. I thought it'd be nice and not clingy. I was wrong. Last year the 2X was nice and not clingy, this year it was filled out! I didn't like that so much. You see, I like to pretend if my clothes don't cling and show my shape that my shape is other than it is! I can pretend that all I like, but it isn't my reality.

We posed for some photos with friends. I was a bit shocked to see myself in the photos. What? I see myself every day, why would I be shocked? My face looked so round, my eyes were even squinty-er than they normally are - and yes, I tried to hide my body behind those in front of me. In our work photo, I was on the end - in the second row behind all those size extra small girls in the front row. I felt like the team mascot - like I didn't belong in that photo. 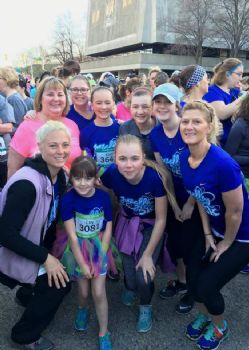 This was our before the race photo with my daughter, the grands, their friends and their moms. I am in the back row in pink. My daughter is next to me.

This was not what I had in mind a year prior! Another year older, 20 pounds heavier and little outdoor training prior to the race. I know some of you are scratching your heads thinking - it's only a 5k AND you WALK! However to a 59 year old, obese, not prepared girl - that seems like 50 miles! I must admit the chorus in my head was apprehensive. 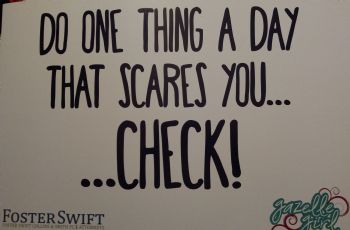 We picked up this sign at the pre-race event. I thought it was fitting for me! 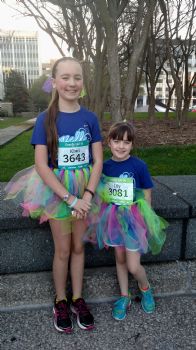 My two youngest granddaughters made tutu's. The oldest one said "No Way!"

We lined up to start the race. There were about 3,000 people running. We were in the middle wave of people. My grandkids and daughter left me in the dust in the first 100 steps. I settled in a brisk walk. People kept passing me. I thought I'd be the last one to finish! The number of people ahead of me kept growing. I was beginning to feel like I shouldn't have signed up to do this! This fun family event for us was turning into my own personal exile!

I kept walking. I looked ahead. I spied a couple women walking together. Their pace was slowing a bit. I thought "I can catch them, I know I can". So I picked up my pace a bit and before you know it, I was passing them. I then searched the people ahead of me for someone else I thought MAYBE I could catch up to and did it again.

Before I knew it, I could see my oldest granddaughter walking with her friends. I caught up to them. I HAD to pass them, I didn't want them to think I was spying on them to listen to their girl talk. I walked on by.

I began searching the crowd again and then I spotted two girls I work with. I thought maybe I can catch them and walk WITH them. I picked up my pace. So did they. The slowed down, I kept walking. I'd get real close, but just couldn't catch them. I decided to jog a few steps to catch up to them. I did!

We were about halfway through the course. We walked together. It was challenging to keep their pace. A little further into the race we saw another girl we work with who was pushing her granddaughter in a stroller. She joined us. We split into twos. I walked with one of the girls ahead of the other two with the stroller.

Before you knew it we were approaching the finish. We decided to jog across the finish line. I will say this, I have never been so happy to see a finish line! 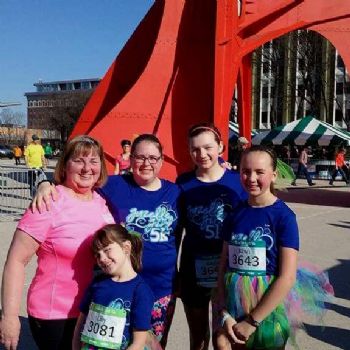 Here's our after the race, grandma's all sweaty photo!

Guess what? We learn from experience. I learned some more stuff. As Winnie the Pooh says, you are stronger than you think you are..... I pushed my limits many times during the race. I probably could have pushed them even more. I stayed on my feet and finished the race even when my head was saying "What were you thinking?"

Living in the dark and imagining things are different than they are doesn't make them so. Eventually you have to come into the light.

I found lots of inspiration and it sparked my motivation. There was the obese mom who was running the half marathon who said "The pain of this is nothing compared to what my son is going through with his chemo." and the little 9 year old girl who crossed the finish line somewhere around the 20 minute mark! and the scores of ladies who were weekend warriors challenging their limits.

I smiled when I was walking around someone and they were saying "I always wanted to be a runner. I tried it in high school when I was fit. I was one of those people whose feet seem to be planted in the ground. I wasn't one of those light footed gazelles. I was the one you could hear coming before you could see me. Running is just not in my soul..... but I want it to be." I could relate.

Back on track, pointed in the right direction and moving forward. I will update you next year at this time!