Timing Is Everything & Baby Steps 2.0

Timing really IS everything, and if the timing is wrong you can sure set yourself up for failure, which is exactly what I did. I have been off track for the majority of a year. I have had good days, even good weeks, but the bad definitely out numbers the good. So for me picking Dispatcher's Week to really give it a solid effort was one of the dumbest things I could have done.

During the other 51 weeks in the year, there's plenty of stupid goodies hanging around my work place. An on going candy jar, random cakes, cookies and donuts, and of course the nightly chow run and Starbucks run. Well Dispatcher's Week is like that magnified x 100! Each day has a theme, both for how we can dress and what we are going to eat. In addition to the theme of the day there is always extra treats and goodies. Deputies bringing us donuts and all that jazz.

I worked Tuesday-Friday and initially thought I would be able to do pretty well. 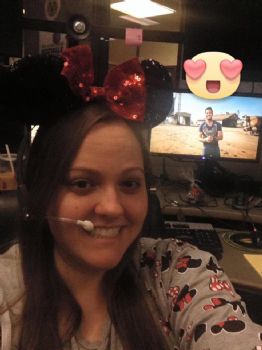 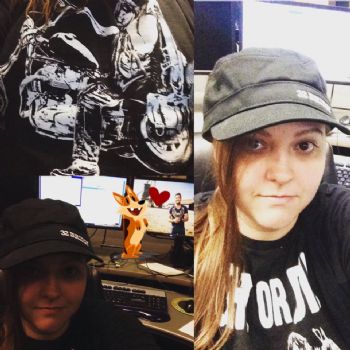 ^I was super excited to wear my Daryl (The Walking Dead) shirt and my 32 Bridge (Luke Bryan's clothing line) hat!

Thursday: Cake & Ice Cream and regular Free Dress Day. (Okay it was actually full uniform day for Day Shift because the Sheriff came for the Dispatcher of The Year Ceremony but the night crew got to wear free dress, woop woop!) 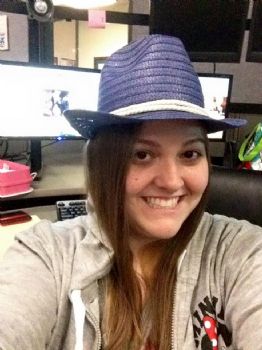 So my first instinct was "this week will be easy! I don't eat meat!" So obviously no meatball sub for me, no chili hot dogs, and I figured all the pizza would be covered in meat. The cake is nothing special and doesn't tempt me I thought at best maybe I'd have an ice cream drumstick and call it a day.

Oh how wrong! Tuesday night they brought donuts, fresh and delicious, I had 2. If you win the word search you get candy, great, so I have had plenty of candy over the last few days.

Wednesday I was not at all tempted by meatballs, but was genius enough to make some nachos with leftovers from nacho day which was Monday!

Thursday I was not at all tempted by the nasty cake, did have a drumstick ice cream cone... but then it was a coworkers birthday and the cake they got for him was magnificent, yep, fail!

Friday they did in fact order a cheese pizza which I definitely ate 3 pieces.

It is no wonder my body is not happy at all. If you are what you eat, I'm a giant donut, wearing a pizza hat, dressed in M&M's!

The part that frustrated me is in years past I never went this far off the deep end. Once I had began losing weight, those things were much less tempting and I could kind of control it to maybe one donut and one other treat during the week and just stick with eating my own food.

I realize now the difference was I was on track back then. I was in a good place mentally. My inner brat essentially said "You've been eating like crap for almost a year, so why in the world would you choose this week with all these amazing goodies to get back on track?" It makes sense in a twisted way. Had I gotten back on track in the weeks prior, I might have had greater success avoiding this goodies. But since I have been messing up for so long it made it so simple to say "well we will deal with it later." Well today is Saturday, I am off and it is later! I found myself wanting to go get some sort of junky fast food, despite the fact my tummy is not a fan. So I really had to sit down and work this out in my mind...

I have been off track for the majority of a year. I am not going to be able to launch right back into the habits when I was kicking a$$ and taking names a couple years back. When I started my journey March of 2012 I did baby steps, at a snails pace. It looked something like this.

Step 1: Start drinking more water.
Step 2: Learn how to track your food (even if you eat 3000 cals, track it!)
Step 3. Start tracking water and making sure you are getting enough.
Step 4: Start moving (Leslie Sansone Walk Away The LBS, 15 mins was all I could do)
Step 5: Start getting your calories in the recommended range.

That was essentially it. From there, the activity became more and more, the water became automatic, the tracking and staying in range was automatic eventually as well. Those steps took months and months to master and move on to doing more. If I had tried to do all those things at once I surely would have been overwhelmed and failed. But because I broke them down in such easy steps, it made it that much easier to get the job done.

I was 272 pounds then, I was overwhelmed by the weight I had to lose. I am 227 this morning, and I am overwhelmed by the weight I now have to lose again. So I will do the baby steps, but these are baby steps 2.0 and they aren't going to require the same amount of time to get them all under control. I would say in a couple short months I could have things back in place, IF I am willing to do the WORK!

I am not the same person I was in 2012, and I don't feel I need the steps broken down any farther than that. But this idea that I am going to dive back in and have it ALL TOGETHER is just not working for me. So it's time to break it down and get back to that happy place where healthy living is automatic. 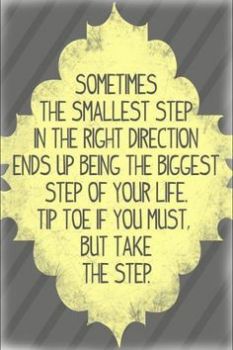