The Swan (namedSwanson) Has Become A Daily Fixture!

Since I was told the swan was a male, my friend Jen suggested the name Swanson. I liked it and it stuck. Anyway, Swanson has become so accustomed to us feeding him that he will wait at the back door until someone brings him lettuce or bread. He has a little temper and I don't hand-feed him because he has snapped at me a few times. If he gets really upset, he hisses, but most of the time, he seems pretty comfortable, just hanging around. The little pond is close and he just goes back and forth. Several neighbors feed him, but I love that he has chosen to "hang out" in our yard.

When I am working in the plants, he just plops down and doesn't seem to be bothered. One day, I saw him actually falling asleep. We tried to catch him napping, but he had already opened his eyes before we could catch him. 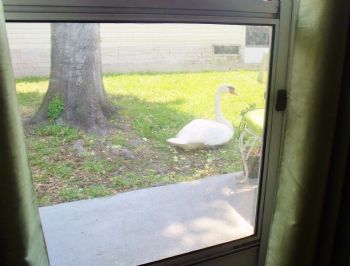 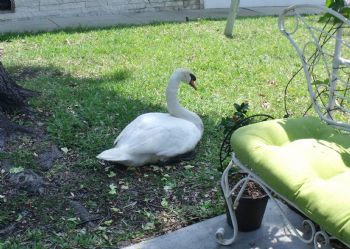 The second photo (with the neck laid back) is just when he woke up.
He is beautiful when he is swimming the pond. I could watch him swim for hours.