My Quest to Eat Cucumbers... A Recipe

When I was a kid, I HATED salad. I would GAG on lettuce of any kind. In college, I made up my mind I was going to learn to eat this disgusting material because it was good for me.

So I started with a little bit of lettuce and a LOT of dressing. I drowned it. As time went by, I used less and less dressing and now I'm happy to report that I can now down many types of lettuce ( and spinach and kale... :D) without hardly any dressing at all. I can pretty much just eat it raw and dry.

Another think I have always hated is cucumbers, but I have always loved dill pickles. Go figure, right? But, of course, dill pickles are really high in sodium generally. Then I had a run in with the half sour pickles at Ted's Montana Grill. They are more cucumber than pickle to me, but I could tolerate them. It dawned on me that this is how I could learn to eat cukes.

So off I go to the internet to find a copycat recipe for Ted's pickles. There are many, many recipes that fit this bill. I found anything from half sour pickles to refrigerator pickles, to actual Ted's copycat recipes.

I found two that I really liked. I combined the ingredients of these two into one recipe.

Here's what I made:

Slice cukes, celery and onions. Set aside.
In a 1-quart combine jar salt, vinegar, and water.
Pack the jar with half the cukes, celery garlic, peppercorns, & dill. Then complete the rest of the jar with the rest of the ingredients. Top off the container with water to cover everything.. Seal the glass jar tightly and store in the refrigerator. It took me 2 quart jars to fit everything in. The recipes say that these will last 4 to 6 weeks in the fridge. Here's a pic. 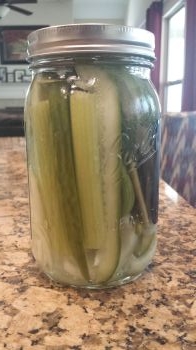 My next batch I will use half the salt I did this time. I will keep cutting it down until I can stomach cukes by themselves. Then, I'll be on to conquer the next veggie. Not sure which one that will be yet. :) Stay tuned.
Share This Post With Others
Report Inappropriate Blog
Member Comments About This Blog Post