What was I thinking? Earlier this week, I had no qualms about doing Rx. When I went into 16.5 I began having doubts about my ability to finish all the rounds with 65# on thrusters. 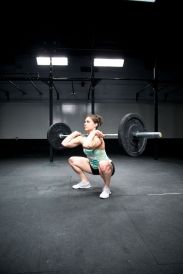 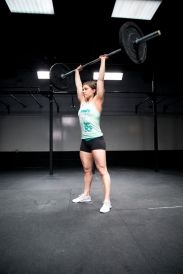 Again, no cap on time, so I could take all day, but sooner or later you just run out of gas and energy. I tried to quit at least 3 times. One time in the first round of 21 my lower back was already hurting and I just did not think I had enough energy and ability to get this done. Besides, I really did not want to do a 45:00+ minute workout. Who the heck wants to have that long of a workout? I could not go faster or do more reps. It took every ounce of energy I had every time.

About 16 thrusters in I stopped and used the roller on my right lower back. I literally said I was done. Considered stopping and just taking a DNF score. For some reason, I got my butt up and kept going after rolling it out.

Literally, was quite sure I was going to die through the whole workout. I am pretty sure I told everyone and myself that I was dying. Without a doubt, I am quite sure my Fitbit registered in the near death experience zone and probably should have had some sort of alarms going off to alert everyone that she should stop. She is going to have cardiac arrest. But without fail, and with a lot of encouragement from a huge number of people, I kept plugging along and finally finished that sorry SOB workout at 50:50.

I am still exhausted, my legs hurt, my lower back hurts, my arms are shaking and I can not think straight this afternoon, but I have accomplished something I did not think possible the entire time I was working out. My husband and my son were both proud of me. My text messages from both of them, made my day. They both finished in under 22:00 minutes, stud muffins.

And although I am not impressed with my time, I will not dwell on the negative. One should always assess what was successful. Most importantly finishing! Proud that I did not stop while doing the burpees and rest. I did all sets of burpees unbroken, albeit slow and methodical, they were unbroken and I kept moving the entire time.

The bar has been set. If I ever have to do it again (which will be too soon) I at least have a target to beat.

What I am really the most proud of? After doing CrossFit for 6 months, I have competed in my first open, and did 2 out of 5 RX, 3 out of 5 scaled and did not finish LAST in the WORLD. Which was my biggest fear. I was adamantly opposed to signing up for the CrossFit Open Games of 2016. I did not want to know how bad I was in the Dioko Box (my home CrossFit Box), in North Central USA, or the World. I just started this CrossFit thing, my confidence is pretty weak as it is. But I conquered a world of fears, stepping out of my comfort zone a number of times: joining a CrossFit Box, sticking with it when you are not very good (BUT seeing improvements), committing to going and being consistent, and then signing up for a competition across the globe!