This is a continuation of the blog I wrote yesterday about the Alaska cruise portion of our vacation. Hopefully, I'll be able to finish this part of the blog before my computer starts acting up.

Sept. 23: Skagway
Our next port was Skagway. Like Juneau and Ketchikan, it is a small town on the Alaskan Gulf coast with mountains right behind it. We had signed up for an excursion to take the White Rail Pass train going into nearby Canada and a bike ride. It would have been fun, but not enough people signed up for it so it was cancelled. We didn't know of the cancellation until that morning when we showed up at the "meet up" spot and no one was there. They were supposed to notify us the night before, but someone dropped the ball. We ended up walking around town. My husband spotted a local place to sign up for tours and we went in to see what was available. It's legal now to grow marijuanna in Alaska and there was a tour available of a grow house. We decided to go! We were the only ones on the tour. A young couple came by in a van and picked us up, and off we went. They live there year round and have a yurt and their little grow house. They can only grow six plants at a time under the current laws in Alaska and can't sell it....only give it away. They were using the tours as a way to make money. They were a really cute young couple and very friendly. We got a chance to walk around their property and learn a lot about the local culture living in Skagway. They owned 10 acres with a beautiful stream next to the mountains. It was so peaceful. I'm really glad we ended up doing this tour because it was so out of the ordinary, and a wonderful break from being around people all the time on the cruise.

Here's a picture of their little grow house. 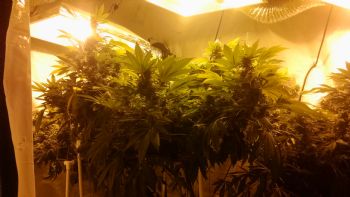 Compared to taking a train ride and then getting to do some bicycling, this was a very different kind of a tour, but it turned out to be one of the highlights of our trip.

This is a picture of a street in Skagway. It's actually where we waited for the van to pick us up. It was a beautiful fall day with the leaves turning. You can see how big the mountains are in the background and our ship. All the towns that we stopped in were like this with huge mountains so close by. The views were beautiful. 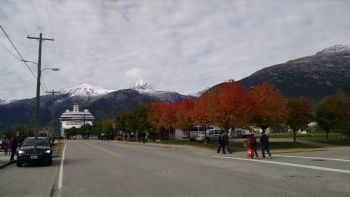 Sept. 24: Glacier Bay National Park
The next day, we went to Glacier Bay National Park. The ship didn't dock anywhere because there is no place to do it. Instead, we went into a small bay and the ship did a 360 degree rotation. The bay was beautiful with the glaciers there. The water was a beautiful color and the glaciers would occassional calf ice. It was stunning. I took more pictures that day than any other day of the entire two-month vacation.

Here's a picture of the bay with a glacier in the background. The ship took up almost the entire bay when we were in it. It's amazing that a ship can be so precise in it's movements. 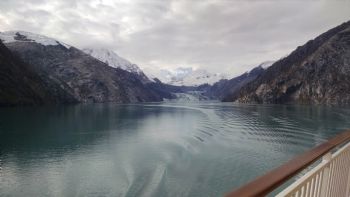 Chunks of ice from the glaicer in the ocean. 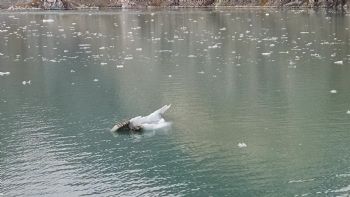 The absolutely stunning sunset as we were leaving the bay. This was probably the prettiest sunset I have ever seen in my life. It felt other-worldly. 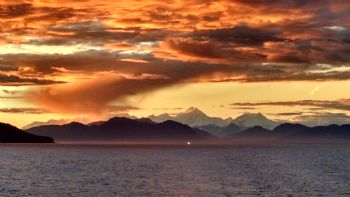 Sept. 25: Icy Strait Point and Hoonan
The next day, we ported at Icy Strait Point. All the towns we had visited in Alaska were small, but this one was REALLY small! It was a cute little town and easy to walk around. We didn't do any excursions here. I love crabmeat so I took advantage of the fresh crab they were selling and had crab for lunch. 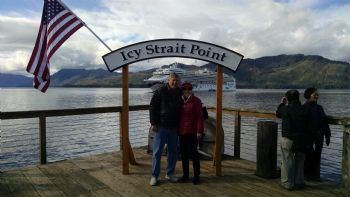 Sept. 26: Sitka
We had a blast in Sitka. It was raining that day....a gentle, but steady sprinkle. We had signed up for a "hike and bike" excursion. I was half-hoping that it would be cancelled due to the rain. It wasn't....and I'm now delighted that it wasn't. It was another highlight of our trip. They outfitted everyone in rain gear (we had brought our own and worn our stuff) and had mountain bikes with disc brakes which are much safer in the rain. It felt glorious once we started biking. It reminded me of being a little kid again out riding in the rain. The hiking portion was in a rain forest and I learned a lot about rain forests from our tour guides.

My husband is in the yellow jacket as we are getting ready to start the ride. Doesn't the weather look miserable? It turned out to be so much fun! 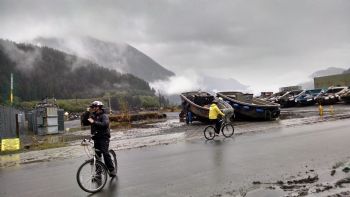 Here's me just being happy as a clam! Celebrating life and overjoyed to get to experience the day. 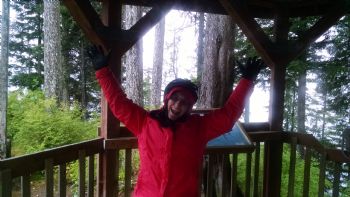 Sept. 28: Victoria Canada, the last port of call on the trip.
The last place we stopped on the tour was Victoria. I had been there before, but my husband had not. We did a little excursion to a cute garden there and then spent the evening walking around. I love Victoria. It's such a pretty town. 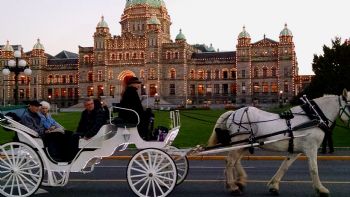 One of the cute things they do on cruises these days is make a little animal out of towels and washclothes and leave them on the bed at night as part of the turn-down service. We saved all the animals during the trip. On our last night on the ship, we took this picture of our little "family". 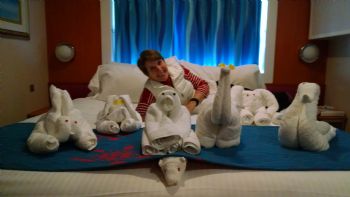 The next morning, our ship docked in Vancouver. Our "vacation from our vacation" was over. I'll write about Vancouver and more of our adventures in my next blog.