exercise can be FUN

I spent a glorious weekend at Elk Island National Park. It is only 40 minutes from my house (in Edmonton Alberta) and for some reason I never seem to go and use it. There are numerous lakes, hikes, drives, camping and more to do at the park. We camped for the long weekend so we decided to buy a year pass that gets up access to all the National Parks across Canada. Now we just have to use it.

Our weekend started slow, Saturday morning we woke to pouring rain. Not the way to start when you are tenting. We were lucky we kept most things locked up so our chairs and such didn't get wet, however more dark clouds were moving in. We decided instead of being cooped up in a tent we would drive back to the city and have a nice lunch in town. By then the sky cleared up and we were good to go for the rest of the weekend.

I love water, everything to do with water so since Saturday was my birthday when we got back to the park my husband surprised me and we drove to the canoe rentals! I was so excited. We even brought the dog. I was a little nervous my dog would jump in the lake, or even move around so much that we would all tip over and fall in, but he did really well. We have canoed a couple times throughout our lives and we knew the basic concepts so we thought we would be rock stars! Hahaha nope. It was quite windy and we spent a lot of time trying to straighten the boat from one side to the other. There were times that we tried rowing straight into the wind and ending up going no where. It didn't matter. We had a blast and the hour went by very quickly. 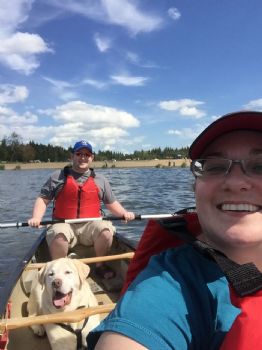 Since I still am mostly a couch potato (trying to change) I thought I would be so sore. I could feel my core working to keep the canoe steady and my shoulders were really pulling on the oars, but surprisingly I felt great. Even the next day I was good to go. When I got back to shore and I plugged in to my SparkPeople app canoeing for 30 minutes (I don't think I paddled the whole hour) I was shocked to see that I burned 467 calories!! that is a crazy big amount for just having fun.

The next day was a glorious +28C (82F) and the sun was shining brightly. So we decided to go and rent a kayak this time. We left the dog behind since we were told he wouldn't fit in the kayak and ran down to the water. This time we really moved. It was so much easier to manage, steer and move forward. The water was a lot calmer. I recommend if someone is starting out to try kayaking first. You sit lower in the water and the base is wider so it is much more stable, and turning is quicker too. We made it out to the island in the middle of the lake, paddled all around it and back before our hour was up. Again I could feel my core, and arms but wasn't sore. so much fun!! Once again I plugged the numbers into the app and was astonished. only 45 min and 701 calories! why have I not been doing this all along?!?! it didn't feel like a work out at all. 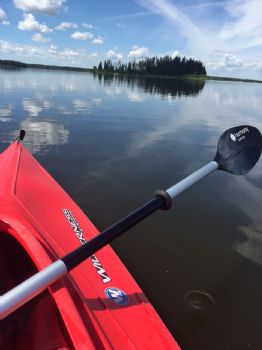 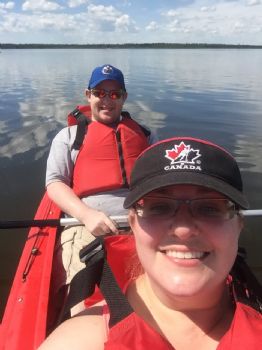 We rested from the afternoon sun and closer to dusk decided to do a easy hike. I accidentally forgot my bug spray and the mosquitos were relentless. I ended up with over 45 bites. The sights were nice, but we walked as fast as possible just to avoid the bugs so it wasn't as enjoyable as I hoped. Next time I won't forget the bug spray and we can go further. Again though, up and down small hills, across dirt paths and boom another 545 calories burned!! I was amazed and so happy. 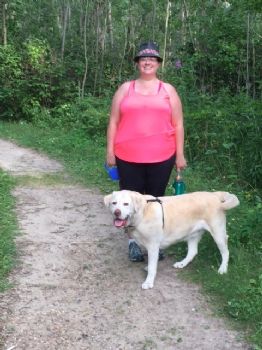 You always hear that exercise can be fun. but unless I was fully sweating I honestly didn't believe that I could burn that much without feeling dead tired. Granted by Monday I was so sleepy. Setting up all the camping stuff, canoeing, hiking, kayaking, packing up and unloading made my very tired. But I wasn't sore and I was so happy. The sun was shining and it just felt good. I can't wait to go again and hopefully see the scale move a bit because of it too!

I found it very important to try new things so you don't get bored or annoyed with how hard burning calories can be. Look around where you live and take advantage of all the different activities that can be found. You will have so much fun, for just a little bit of money and burn a ton of calories! Awesome lesson learned!
Share This Post With Others
Report Inappropriate Blog
Member Comments About This Blog Post